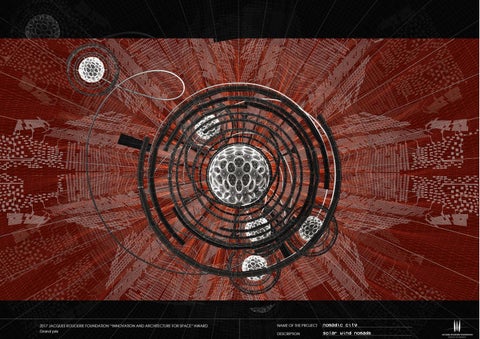 the grid depicts the gravitational distortions of space-time

1./ the center of mass has a weight exceeding the weight of the whole city. this property is used when landing on the planet. the center of mass is placed above the geo[planet] stationary orbit and allows the city to hang over the planet, without exerting pressure on the surface. also the center of mass is used as a warehouse of materials and food, necessary for the life of the city. 2./ child-city. during the flight of the main city, child-cities (branches-cities) are constructed from materials obtained on planets. Then the child-cities acquire their own solar sail and separates from the main city.

layer of the structural system of sail

base layer of solar sail

landing on the planet

[planet]stationary orbit solar sail in the folded state point of attachment to the planet spread of â&#x20AC;&#x153;dustâ&#x20AC;?

evolution of the city

city scheme in a space

city scheme for landing on the planet

inside the transformable area of the city

view along the city axis

process of printing a dust-builder

fragment of the construction, assembled by the dust-builder

This is a very long and thin structure, designed to fly long distances in space — interplanetary and interstellar. Exists in 2 forms — flight mode and landing /attaching to the planet mode. The length of the City depends on the fact that when landing its center of mass must be from the planet, at a distance greater than its (geo)stationary orbit. Due to this, the City will hold above the planet’s surface, without exerting pressure upon her. The weight of the center of mass exceeds the weight of the rest of the City. The City is also equipped with solar (or stellar) sail. Due to its huge square, sail will be fast enough to give the City a significant speed. Initial acceleration is achieved due to the energy of the photons of the sun, then the braking is made due to the oncoming light of the stars, to which the City flies. Also braking may be done through the reverse light (using reflected light). Partly the sail surface consists of solar panels to produce energy for the City to be able to function. The transforming part allows to adjust the length of the City on the basis of the height of the orbit of the planet on which it needs to be landed. Core is a central structure to which all the elements of the City are attached. It stretches. Material used for core construction— graphene pipes. Settlement includes housing, manufacturing, greenhouses and other necessary structures for the lives of citizens. It can be placed along the entire length of the core, except for a part of the transformation, but are concentrated around the center of mass to maintain the City in equilibrium.

The dust consists from Master dust — nanorobots capable of printing (3D printing), their exact copies and normal Work dust. Master dust can reproduce itself and create Work dust till the exhaustion of energy or resources or until the special order is made. Work dust consumes the resources provided to it, moves with them, and then builds (prints) the necessary facilities using the resources. While the extraction of resources is made, the consuming function remains, and the construction function is replaced by warehousing. Dust creates a strong, but removable structure from a wide range of materials. This structure is achieved as in the principle of a puzzle, three-dimensional blocks are attached to each other with special fasteners, which themselves are the Building dust. Fasteners firmly hold the blocks among themselves, but with it is also easy to dismantle them. The size of the Master dust is approximately 1 mm, and for work dust — 0.3 mm. Dimensions of produced blocks are comparable. Dust can only function within range of the energy emitter (microwave, high-energy radio waves). This allows you to make the design more compact (no battery). This is also done for security purposes in order to avoid spontaneous growth in their numbers exponentially due to an error or hack. Dust carries significant philosophical aspect even outside of this project of planet colonization. Holistic stationary objects, from ballpoint pen to the building are disappearing. All of this becomes removable and portable. Any object can be created and dismantled if it becomes unnecessary. And it all happens within minutes.

The importance of resources from which the objects are made, the energy, the Dust and the project of construction for each subject remains. The Dust itself are the building blocks in a dormant. At a certain signal they start moving, in a blink a spoon turns into a fork, a couple of chairs into a table, etc. These transformations will occur in seconds. The lifestyle will change on a global scale, the buildings in the cities will become mobile, and even more: fluid, flowing into each other. The need of cities and transport will be revised, as there will be no restrictions associated with the property. For example, anywhere in the forest or in the field within minutes there is a house (or what they considered at the time), or multiple houses will merge into one and appear in the office. Meaningful for this world are only the energy, distances and ideas — projects of constructions for each subjects and, in addition, Dust. This is a fundamentally new approach to the material world, it needs to be comprehended philosophically, literary and figuratively. Therefore, in this project of mobile space settlement we only unveiled a little of this vast subject, leaving it for further thinking and development. 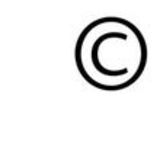