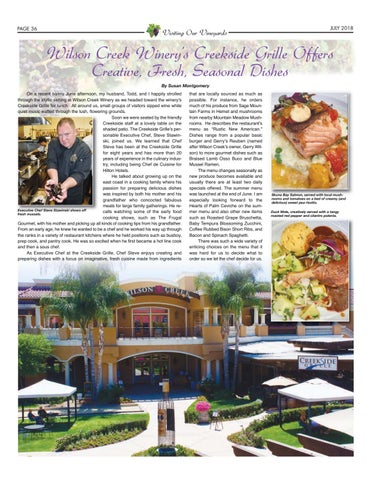 Wilson Creek Wineryâ&#x20AC;&#x2122;s Creekside Grille Offers Creative, Fresh, Seasonal Dishes #!#  "# On a recent balmy June afternoon, my husband, Todd, and I happily strolled through the idyllic setting at Wilson Creek Winery as we headed toward the wineryâ&#x20AC;&#x2122;s Creekside Grille for lunch. All around us, small groups of visitors sipped wine while quiet music wafted through the lush, flowering grounds. Soon we were seated by the friendly Creekside staff at a lovely table on the shaded patio. The Creekside Grilleâ&#x20AC;&#x2122;s personable Executive Chef, Steve Stawinski, joined us. We learned that Chef Steve has been at the Creekside Grille for eight years and has more than 20 years of experience in the culinary industry, including being Chef de Cuisine for Hilton Hotels. He talked about growing up on the east coast in a cooking family where his passion for preparing delicious dishes was inspired by both his mother and his grandfather who concocted fabulous meals for large family gatherings. He re""#"#""#! # #  calls watching some of the early food "#" cooking shows, such as The Frugal Gourmet, with his mother and picking up all kinds of cooking tips from his grandfather. From an early age, he knew he wanted to be a chef and he worked his way up through the ranks in a variety of restaurant kitchens where he held positions such as busboy, prep cook, and pantry cook. He was so excited when he first became a hot line cook and then a sous chef. As Executive Chef at the Creekside Grille, Chef Steve enjoys creating and preparing dishes with a focus on imaginative, fresh cuisine made from ingredients

that are locally sourced as much as possible. For instance, he orders much of his produce from Sage Mountain Farms in Hemet and mushrooms from nearby Mountain Meadow Mushrooms. He describes the restaurantâ&#x20AC;&#x2122;s menu as â&#x20AC;&#x153;Rustic New American.â&#x20AC;? Dishes range from a popular basic burger and Gerryâ&#x20AC;&#x2122;s Reuben (named after Wilson Creekâ&#x20AC;&#x2122;s owner, Gerry Wilson) to more gourmet dishes such as Braised Lamb Osso Buco and Blue Mussel Ramen. The menu changes seasonally as new produce becomes available and usually there are at least two daily specials offered. The summer menu was launched at the end of June. I am especially looking forward to the Hearts of Palm Ceviche on the summer menu and also other new items such as Roasted Grape Bruschetta, Baby Tempura Blossoming Zucchini, Coffee Rubbed Bison Short Ribs, and Bacon and Spinach Spaghetti. There was such a wide variety of enticing choices on the menu that it was hard for us to decide what to order so we let the chef decide for us.

  !!  !! ! ! The Creekside Grille is open for After a palate cleansing !!  ! ! !  lunch from 11 a.m. to 4 p.m. Monday cucumber amuse-bouche (a through Friday and until 5 p.m. on small appetizer offered to Third Rotary Saturdays.Annual Every Sunday, the Creekmembers), we enjoyed a Grille offers its famous Bubble side Taste of the World BenCaesar salad with a light, Brunch Buffet featuring omelet, fresh dressing and a tasty seafood, carving and dessert stations. caramelized onion goat Iâ&#x20AC;&#x2122;ve been to this spectacular brunch cheese tart. For entrees, I and it is one of the most scrumptious relished the beautifully prebrunches Iâ&#x20AC;&#x2122;ve ever experienced. sented Skuna Bay Salmon, We were thrilled to see Wilson served with local mushrooms Creek owners, Gerry and Rosie Wiland tomatoes on a bed of son, dining at the Creekside Grille the creamy (and delicious) sweet day we were there and we talked with pea risotto. The salmon was them briefly about their approach to   ! !! !! !!!  ! perfectly prepared, moist and !   ! excellence in both wine and food at flavorful. Todd was in meatWilson Creek. They are obviously loversâ&#x20AC;&#x2122; heaven with an all-natural, grass-fed New York strip steak served with lyonvery pleased with the wonderful dinnaise potatoes on Sage Mountain Farm wilted spinach. We also savored one of the ing experiences their winery offers. No wonder they have lunch almost every day at daily specials, Duck Mole, creatively served with a tangy roasted red pepper and the Creekside Grille. There is such joy in savoring good food and wine. cilantro polenta and accompanied by a refreshing Chayote squash salad. As a sweet Photos by Todd Montgomery. finale, the chef sent us a delectable dessert of house-made donut holes rolled in mint crystals served with coffee mousse topped with whipped cream in a chocolate espresso cup. (Can you imagine a more luscious dessert?) All Creekside Grille desserts are made in-house. We enjoyed these dishes with wonderful Wilson Creek wines. I loved the crisp 2017 Viognier, which paired nicely with the salmon, and Todd was particularly enamored with the 2015 Mourvedreâ&#x20AC;&#x2122;s deep berry flavors that complemented his rich steak. The staff is well versed on wine pairings and can suggest wines that will go best with specific dishes. Of course, at Wilson Creek, there are many exceptional wine choices such as the wineryâ&#x20AC;&#x2122;s famous Almond Sparkling Wine, which would be a nice wine to launch any meal. There were so many wonderful choices on the menu, including appetizers, salads, sandwiches, and desserts. Vegetarian options are also available and the restaurant has a special gluten-free menu. We were impressed to learn that Creekside Grille is certified by the National Foundation for Celiac Awareness, which is a rigorous process. The staff undergoes gluten-free resource education awareness training and all gluten-free dishes are served on black plates. The staff makes sure there is no cross-contamination between gluten-free items and the preparation of other dishes. (Not all restaurants are careful about this and I was very impressed with the Creekside Grilleâ&#x20AC;&#x2122;s efforts to focus on this important issue for so many people.) Being an Executive Chef at such a popular winery is a demanding job. Chef Steve not only creates dishes, but he plans seasonal menus, manages the budget, orders ingredients, and hires and trains the staff. And on a busy day, you may find him on the line preparing dishes. The Chef is also in charge of the many weddings and other catered events held at Wilson Creek. In addition, the more casual Creekside Bar & Grille is open on Saturdays and Sundays and features simpler fare, such as wraps, sandwiches, salads, and cheese plates. Can you imagine overseeing all these venues? And on a typical weekend, there may be several weddings and a concert going on where food is available. This takes lots of coordination. Fortunately, there is a talented staff of more than 20 in the kitchen to help keep this all on track. Chef Steve emphasizes that consistency and quality are uppermost priorities. He admits itâ&#x20AC;&#x2122;s challenging to plan quantities for such large groups and also to make sure all the food for a large group is ready at the same time, but it all works at Wilson Creek because of its experienced, dedicated staff. Chef Steve likes to emphasize that he strives to present his guests with the very best dishes possible. He likes this quote from the celebrated chef, Thomas Keller (of French Laundry fame): "It's not about perfection; it's about the joy of striving." And so Chef Steve strives for perfection by choosing the best ingredients possible and working with his staff to create the best dishes possibleâ&#x20AC;&#x201D;while having fun at the same time. There is obviously great joy in the chefâ&#x20AC;&#x2122;s and staffâ&#x20AC;&#x2122;s approach to serving guests at the Creekside Grille.