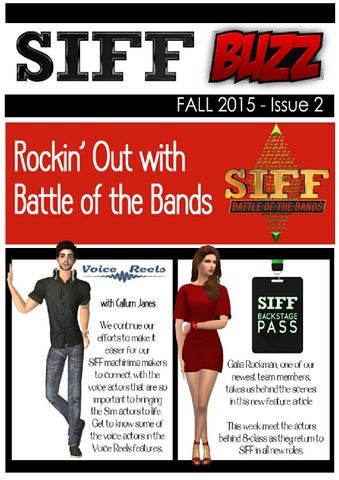 Behind the SIFF Scenes This week we have a few new articles for your enjoyment, as we work behind the scenes to come up with new and fun ways to showcase all of the different SIFF talents. I love being able to be here each week to share a variety of exciting things happening during SIFF, but also we are here to invite and encourage you to join in. SIFF is not only a spectator sport, we really do want you to be involved. Joining the Red Carpet photography challenge is one way for non-machinima makers to get in on the action, but we are always looking for other things that we come across in the community to showcase here because SIFF would never be possible without all of the amazing contributions from the whole community. Happy SIFFIng! (a figment of Minraedâ&amp;#x20AC;&amp;#x2122;s imagination)

SIFF STUFF is now available for download Click HERE to find it all in our forums. Red Carpet backdrop walls, T-shirts and posters - Sims 3 and 4 and some Sims 2 (we are not ignoring Sims2, we just donâ&amp;#x20AC;&amp;#x2122;t have the needed resources)

SIFF Memories with tabby Lloyd SIFF is in itâ&amp;#x20AC;&amp;#x2122;s 12th season already so we have thousands of awesome memories. Each week I will toss in a few throwbacks to our earlier years.

These photos were taken by SuperPogimon, one of our first staffers at SIFF. He got permission from SimGuru Hydra to use her avitar / Sim for this visit. In the real world, Minraed had the great pleasure of getting to meet SimGuruHydra in person and she was just as much a real life fan and supporter of SIFF as her Sim was.

On the right- the REAL SimGuruHydra, who is no longer with EA. We will always remember her for her awesome support and encouragement.

We will, we will, rock you! Okay, so Queen isn’t making an appearance at this season’s SIFF, but we do have some royalty in this season’s Battle of the Bands!

Yep, I do mean royals! Tatu Boys are making a comeback this season, which will be their third time entering SIFF. The hunky band members include Prince Alexander Valmont, as well as his partner, Elias Hastings. Too bad they’re married; I’m available as a royal consort! The rest of the band doesn’t look bad, either! I have no qualms against commoners! I look forward to seeing what they bring to us this season!

Speaking of returning artists, II, an openly transgendered artist, is making a comeback this time as well. II was a fan favourite last season, and is sure to be one again this time around. I can&#39;t wait to see what they have up their sleeves for this season

Rumour is - lI is pregnant!

Six Strings is a new band entry this season, but the members have identified themselves as a cover band. I love cover bands! I look forward to seeing what songs this band covers! Oh, and another thing – this band is entirely comprised of teenagers. It will be interesting to see how these busy teens juggle their fame and school lives!

A major law passed in the U.S. also inspired the creation of a new band – LGBT. Yep, this band represented by a rainbow symbol is all about equality, as each member is one of the four letters that LGBT stands for – lesbian, gay, bi, and transgender. It’s great to see a group like this emerge, and I look forward to seeing what they provide for us this season!

Click HERE to see the full Battle of the Bands Program There are ten band entrants for this round of SIFF, each bringing their own unique touch to the competition. I bet the parties will be as entertaining as the main events! Can’t wait! I better choose some more outfits!

We are in the process of building a better connection between voice actors and Sims machinima makers. Throughout our websites and social media you can find more ways to connect - see the list of links below. If you are a voice actor for Sims Machinima and you want your name to be on our directory or if you have ideas on other things that we could be doing, then email us at

SIFF VEnues For hosting your next SIFF VIP Event As always we encourage creativity of all kinds at SIFF, not just machinima making. So once again we invited builders to create venues for use when hosting your SIFF parties and other events.

Gothkittymimi - Monumental Awards Theatre - HERE in the Sims Gallery A stunningly epic venue that is sure to meet all of your SIFF event needs. No CC so you can add any of the SIFF official downloadable objects as you wish. Get this and all of the venue details in our forums

With Callum Janes Callum has been reaching out to some of our SIFF voice actors to give them some of the recognition they deserve, and to let us get to know them a bit better since they often get lost behind the scenes. So letâ&amp;#x20AC;&amp;#x2122;s get startedâ&amp;#x20AC;Ś

Br0kenEnglishVA, also known as Carl G Brooks, is an online Male voice Actor with a medium range. Carl has been known for his roles in many different machinimas and animation. One of his most long running involvements is with the Halo Machinima series: Outpost 86. Since his rise in the rise in the Halo Machinima scene, he became Co-founder of HitPan Productions where one of his most recent and longest(now in it&#39;s 3rd season) roles is featured in the series: Outpost 86. Other roles include Max from Alone, Mineguy from A Day in Minecraft and Various voices from Hagen Toons&#39;: Spiderman in the Kawaii World. Carl is currently in the running in the 2015 Fall Voice Actor&#39;s Playbill due to his role as Peter in the upcoming Sims 2 Voice Over Film: Oblivion by Sadistic Siren. You can find out more on what Br0kenEnglishVA has been in here: https://goo.gl/Rs5S7t

ChugFat is an online, male voice actor sporting a deep male voice. Chugfat has been known for his roles in a variety of productions; from audio books, to sims series, to dubs of comic books.

Recently Chugfat won Best supporting Actor in a Sims Machinima at the 2014 Sonar Awards. This was for Male VA his role as Kay in pleasentlyperplexed&#39;s Mythos! He has Voice of Stephen in garned a fair amount of attention from this role, City Bitch! leading him to be cast in SIFF 2015 series: City Bitch. Chugfat&#39;s talents not only lie with voice acting, but he also plays the persona Creepy Colin, a fictional music artist who infuses dark humour into his songs. When asked about working with ChugFat, Mythos director Pleasently Perplexed said: &quot;He works hard PLUS his voice is ultra sexy so he is amazing to work with!&quot; Pleasently Perplexed If you would like to hear more from Chugfat, check out this playlist: https://goo.gl/OETDzW

Keep checking in as ProfKranc features different voice actors and actresses each week in the SIFF Buzz. So far we have 8 voice actor submissions including ProfKrank himself so I suppose we should get him in for an interview too!

Red Carpet Photo Prompt - Behind The Scenes The SIFF Red Carpet can, and should, include the usual celebrities on the photographerâ&amp;#x20AC;&amp;#x2122;s Red Carpet, but we always encourage you to think outside of the box with this. We will provide new prompts each week that may inspire ideas, or perhaps encourage a little story-telling along the way. We welcome all types of celebrity photos so get your Paparazzi on this season!

Jorgha has pretty much been locked up in the SIFF offices from day one this season, but she doesnâ&amp;#x20AC;&amp;#x2122;t seem to be complaining. She is always up to something behind the scenes and she looks pretty excited about it, whatever it is.

Our very own Fangirl, Kenleigh, is spotted taking some yoga time. She tells us she needed to get her legs in shape for some serious high-heel time during SIFF. Photo by TenderWolf

The Untruthful by Ziva Blackie: It feels so good… Let’s sweat out all of those toxins… Hauni: Oh yea? The only thing I’m sweating out is my manliness. I can hear it saying “Goodbye, Hauni! Next step, manicure?” Jana: There’s the word “man” in manicure. Your argument is invalid.

(right) Even the toughest guys enjoy being covered in weird sticky concoctions.

Bringing you the latest news, interviews and insider reports on the up and coming stars, directors, bands and musicians of SIFF with

Our goal is to get as many interviews and features into Rising Stars as possible during the SIFF season so that the fans and viewers can get to know as many of our Rising Stars as we can fit in here for you. This week we get to know khcrazygirls - a name we know well around here at SIFF. She will be paring up with theElonianCass, one of our Masters of Machinima, for a much anticipated joint project. On the other side of the coin we have Lost in Wonderland - another name we are familiar with as a voice actress, but who we will get to see on the other side of the camera as she joins SIFF with her first ever machinima project.

Keep up with all of the season's best gossip and fun. 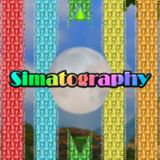