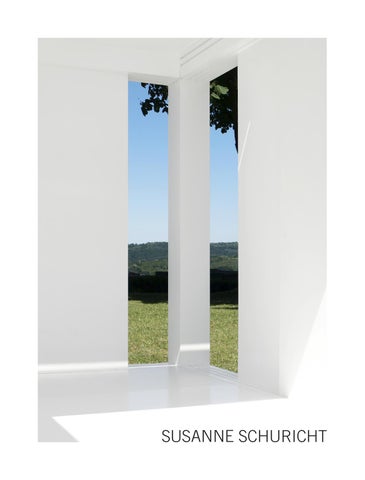 Framing, Blanks / Frontpages / Corpus Each of the groups of works by the artist Susanne Schuricht deal with the framing of perspective and the creation of a visual excerpt from the surrounding context. The frame blocks out one part only to anonymously highlight another. In Frontpages, the whited-out first pages of newspapers serve as the frame for the images, which are thus liberated from the surrounding informational texts. The spatial object Corpus provides the viewer with a frame for a view of the natural surroundings. In the work Framing Blanks, parts of a display window are covered with white surfaces, while the inside/outside view is in turn framed by the white surfaces. In all three groups of works, the “white” areas create an abstraction-inducing empty space that in turn draws attention to what lies behind it. The material quality of the white spaces differs greatly from work to work: In Frontpages, the thin paper has become somewhat wavy from the coat of paint; Corpus 05 consists of light-gray cement; in Framing Blanks, the material is made up of white film and gleaming glass. With these varying notions of materiality, the artist’s clear concept easily adapts to multiple working techniques: This is also testimony to the relevance of the idea and thus its widespread validity. For it is only in the search for the appropriate form of expression that Susanne Schuricht arrives at the right medium: Not the constitution of the work alone should be seen as the characteristic of her work, but instead it is the pervading vision and intellectual standpoint that gave way to all three groups of works as a consistent implementation of an overarching idea.

View into open green spaces out of Corpus 01, 2008 Photography, Arnsberg

Frontpages The series Frontpages focuses on the information communicated by the photographic imagery found in todays newspapers from different countries and cultural communities. Displaying a selection of newspapers, each with all text painted over so viewers can reflect on todayâ&#x20AC;&#x2122;s offerings of visual imagery.

the “…harmony and accord of all parts, which is attained in such way that

in relation to both spaces and to attain a state of reflection. The person using

nothing can be removed, added or changed without destroying the whole.”

the space, located within, adjusts his view of the outside while at the same

Art however, in the context of the Corpus, is intended to push this ‘whole’ to

time representing, to the observer, this act of self-selected viewing in the

the forefront of consciousness. ‘Double Room, Corpus 01’ is a reclining

form of a framed image of himself within the white space. This is possible

cuboid, white, with sliding panels on the ceiling and the sides, slightly more

because this space, as a work of art, does not represent any functional

than a metre and a half high and two and a half metres wide. It presents

social, political or commercial reason for its existence except for being art.

constantly new sectional views depending on the movement and adjustment

The gestalt of the Corpus, its form, cubature and proportions are all aesthetic

of the sliding panels: Views of the outside from within the space and of the

person within from the outside. The result is framed sectional views of the

mobility of the sliding panels. Essential to the meaning of the work is the

viewer within. It is an authentic art experience of a world within a world.

define the landscape. Looking into the Corpus one sees a rectangular white

‘Dialectic of Enlightenment’. They demand that authentic culture be

fragments of the person inside. The posture of the people inside is dictated

purpose. It stimulates the imagination by giving inspiration, but in contrast to

outwards, while being partially concealed by the sliding panels.

the culture industry, it leaves freedom for independent human thought and action. Authentic culture does not aim to reconstruct reality, but to go far

the duality of space and shell. It creates a boundary between the exterior and the interior. This shell creates a space for repose and activity, a space to store one’s things protected from the undesirable influences of the world outside. The Corpus is different. It brings the duality of interior space and

Corpus 04 ∕ Belvedere The room-corpus is accessible, you can sit or lie inside, its parts are within

dynamic interaction with their environment. The reduced and clear form is

reach, sliding them you can change perspectives, create a detail, which can

be shifted again in the next moment. In the room-corpus, I’m separated from

forms of the surrounding. Only by reducing the possibilities of interaction

the world and especially close to it at the same time. Belvedere, Corpus 04 is

concentration can be created. A state of awareness. The artwork only

a cuboid, white, with sliding panels on the ceiling and the sides, slightly more

than two meters and a half high and one and a half meters wide. Here the

know and enlarge their perspectives. There are formal references to modern

visitors become actors and spectators at the same time. The room-corpus

architecture – the angle as a reference to Mies van der Rohe, the reduction

invites them to stop and rest; it faces the spectators with their environment

to light and form, the exposed volume – as well as references to the era of

and with themselves, with familiar and strange things. It works as a catalyst

Renaissance like the Rotonda. Both are integrated into a private language,

for perception and motivates the spectators to become active themselves.

a particular attitude towards the world, something radically referring to the

Untitled, 2006 Series In The Night Photography Dubai above

equipment in the foreground of certain motifs. The image, Burj Flavin-Tatlin,

is a symbol of all the towers in the area, and for those yet to be built.

Dubai. Some of the photographs consist only of countless points of light on

It consciously shows a tower in the making, depicting mans’ delusions

a uniform, deep black background. The arrangement of the points of light

often indirectly sketches the typology of a skyscraper, yet without clearly revealing its form. The images take on the form of a pictorial riddle, in which

This simultaneous composition of both large and small scale elements within

the incomplete fragments of information stimulate the viewer’s imagination.

The apparently inexact positioning of the construction site floodlights

image: it creates an effect of comprehensibility but also of surreality. Going

accentuates the rudimentary technology employed in assembling the shell

far beyond social criticism, the purely visual quality of the photographs in

of the structure, providing a radical contrast with the fine cladding of the

series “In The Night” unfolds, at times drifting towards abstraction due to the

finished building. By showing the direct proximity of small and large scale

indefinite spatial identity of the points of light. By reducing the motifs to their

dimensions, the photographs in this series underline the fragile social

and the local, largely simple working methods revealed by the crude site

Rectangular 01 was developed from the artist’s study in proportions. The

possibility of experience and insight. Piet Mondrian said, “What do I wish

study is a clear reference to the principle of the “golden section”, a principle

to express with my work? I want to achieve beauty at all levels and harmony

made popular by Andreas Palladio’s work in architectural history. Against

through the balance of relations between lines, colors and surfaces.

this background, Rectangular 01 can be seen as an artwork that operates

But only in the most clear and stark way possible.” Concrete art is a style of modern art that is based on principles of

In contrast to Palladio, however, the artist is not creating architecture, but

mathematical and geometric aesthetics. Typical of this style is a reduction

rather concrete art. Concrete art is not the same as representational art, for

down to a few basic geometric forms such as squares, rectangles and lines,

it does not depict anything – neither visible nor invisible reality. Unlike

as well as the use of only few primary colors or, as in the case of

architecture, it has no practical utilitarian value, but instead aims at the

Rectangular 01, the reduction down to black and white.

within the context of Palladio’s rules of aesthetics and harmony.

no beginning, no end moment and eternity balance and perspective prospect and past lightful and colorful it radiates out into the dark.

When it gets dark, 2008 Photography Gintengai Market in Koza, Okinawa, Japan

When it gets dark Once the old market, which dates back to the 1950s will be demolished,

as poem has an effect that is beyond everyday language. This poetry

the lights, which remind on lanterns will be gone and the alley will change

removes the aesthetics of the factual situation from the economic framework

its face forever – But memories of those days, with all their good as well

as difficult sides will not fade away…

artwork. In this way the atmosphere of the place is not only captured, it exists as a permanent installation much like a memorial. A memorial to the

narrative and of local and specific peculiarities. The work retains an aspect of

this particularity and provides passersby with a permanent reminder of part

perspective. The term poetic refers to the “poetry of the moment” and means

of their own history. The work thereby carries out a positive act of mourning

that the signified has an effect that eludes language, something silent, much

on behalf of the inhabitants of Koza.

Thru Boxes Noren market is an old traditional market in Okinawa, Japan, one does not

see often anymore. Most of these traditional markets have been replaced by

take these boxesâ&#x20AC;? all around Noren Market.

malls. And the old Noren Market is in danger as well. At Noren Market everything has its place and function, there is nothing superfluous.

My work is built of many of these boxes that are so symbolic for the Noren Market. It is placed in the middle of the hustle and bustle of the market and

used. These boxes, crates and containers are visibly everywhere, being

foresights. It has been created together with the sellers at Noren Market who

re-appropriated and recycled in a special sense: They are being used for the

have presented me with a cardboard box. How will it be used in the future?

display of products, as tables, chairs or storage containers or, completely

Perhaps the work will be re-appropriated as well? In the late evening Noren

disassembled, used as signs or for the covering of walls. These containers

Based on the original installation in Japan, build of another material and installed into another place – Like into the middle of a plaza, a marketplace, an entrance, a courtyard…

ParticipART exhibition at MART, Museum of Modern Art of Trento and Rovereto, Italy

Susanne Schuricht 1972 Born in Meschede, Germany 1991–1994 Studies at the Technische Universität Berlin (TU-Berlin), History of Arts 1993–1996 Restoration of Paintings and Photography at the Department for historic preservation in North Rhine-Westphalia and at Museum Folkwang, Germany

Lives and works in Berlin

With / Without, Spatial Products, Practices & Politics in the Middle East, In The Night, published by Bidoun

and Moutamarat, edited by Shumon Basar, Markus Miessen and Antonia Carver, May 2007

Tate Modern, The Architectural Association and The Institute for Contemporary Art, 2006 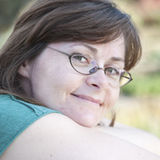