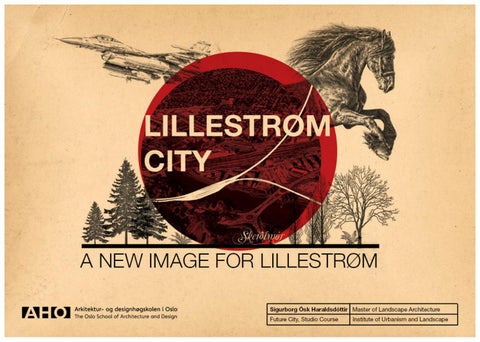 A New Image for Lillestrøm THIS PROJECT is about transforming infrastructure through an investigation of mobility and streets in cities. The project aimes to provide critical insights into the conversation about future mobility as well as street quality. It is easy to argue against the car and the development occurring worldwide, but the important question is how streets can improve the quality of our life. THE FUTURE holds the possibility to rethink streets and their role. What can the street perform and how can it interact with its users? Our streets should be safe. They should also be able to transport more people, collect and treat water in natural systems, contribute to social interaction and perhaps even provide food? They are vital in creating healthy sustainable cities. To establish a sense of connection and respect for your surroundings, speed must also be taken to consideration. The faster you travel the greater the loss of connection to your surroundings. When getting inside a car, time and space become distorted. In terms of mobility, choice must also be offered to people. THOUSANDS of zero-emission vehicles are emerging, and it is therefore vital to design flexible and adaptable streets to gain maximum efficiency. We must prepare our infrastructure for the future. Can the infrastructure be designed in such a way

that it is capable of having multiple modes of transport interchanging, possibly changing over time, without losing the quality of the space? IN MY PROJECT, A New Image for Lillestrøm, I mapped the width of all streets in Lillestrøm and compared it to other data to try to figure out the logic behind the system. I mapped national roads going through Lillestrøm, speed limit on all streets, traffic volume, parking and open green areas. I discovered that there is no one rule deciding the width of streets in Lillestrøm. Multiple things have to be taken to account. The street width is sometimes related to density, other times to traffic volume as well as speed limit. LILLESTRØM is a city with grid based street network, and in my project I propose that the qualities of the grid are maintained and enhanced, with opening up one way streets and reconnecting cut off ends. That way the full potentials of an open grid network are exploited. I also propose that most of the streets will be narrowed, except in the city centre, as a sort of a ‘reverse Haussmann’. To enhance to quality of the space in the city, the streets are made narrower, and by doing that I also aim to increase the permeability of the surface as well as increasing biodiversity. At the same time I develop a typology for

shared streets in the villa neighbourhoods. To spatially connect private gardens to the public street strengthens the spatial quality as well as safety of both. I propose that the speed limit for Lillestrøm will reduced down to 30 km per hour and in the villa neighbourhoods, down to 15 km per hour. This increases the safety enormously and opens the possibility of intergrating streets better into other spaces in the city. Driving from one end of Lillestøm to another, at this reduced speed limit is only increased by 4 minutes from todays situation. FINALLY I propose the city centre expansion and future densification to follow Alexander Kiellands gate - a big and beautiful esplanade that goes from existing city centre, capable of supporting much higher density than today’s situation. The esplanade is well suited for the new tram line I propose, to connect the scattered development in the municipality. That tram line then has the possibility to connect to Oslos Metro system, addressing the problem of commuter traffic in the municipality. TO GO in this direction could take us down a safer, healthier and more efficient path, towards sustainbility, and would develop a new image of Lillestrøm as a more livable city, with a much greater potential to meet tomorrows challenges when it comes to transport.

This project is about transforming infrastructure through an investigation of mobility and streets in cities. The project aimes to provide critical insights into the conversation about future mobility as well as street quality.