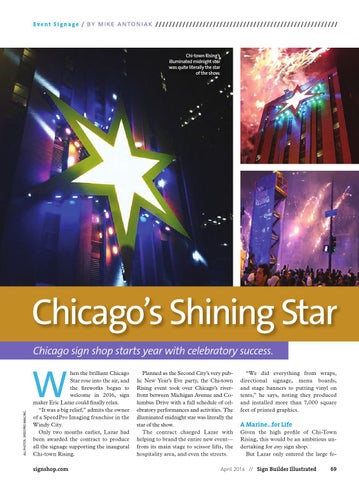 Chi-town Rising’s illuminated midnight star was quite literally the star of the show.

hen the brilliant Chicago Star rose into the air, and the fireworks began to welcome in 2016, sign maker Eric Lazar could finally relax. “It was a big relief,” admits the owner of a SpeedPro Imaging franchise in the Windy City. Only two months earlier, Lazar had been awarded the contract to produce all the signage supporting the inaugural Chi-town Rising. signshop.com

Planned as the Second City’s very public New Year’s Eve party, the Chi-town Rising event took over Chicago’s riverfront between Michigan Avenue and Columbus Drive with a full schedule of celebratory performances and activities. The illuminated midnight star was literally the star of the show. The contract charged Lazar with helping to brand the entire new event— from its main stage to scissor lifts, the hospitality area, and even the streets.

“We did everything from wraps, directional signage, menu boards, and stage banners to putting vinyl on tents,” he says, noting they produced and installed more than 7,000 square feet of printed graphics.

A Marine…for Life Given the high profile of Chi-Town Rising, this would be an ambitious undertaking for any sign shop. But Lazar only entered the large fo- 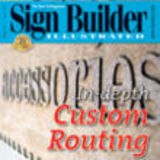