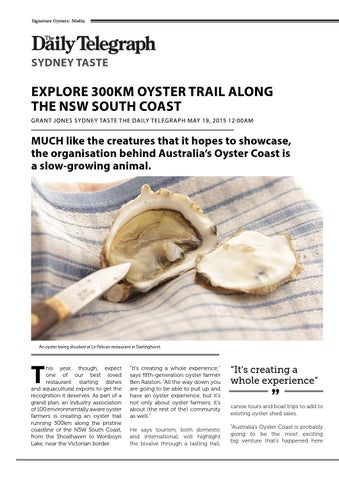 MUCH like the creatures that it hopes to showcase, the organisation behind Australia’s Oyster Coast is a slow-growing animal.

An oyster being shucked at Le Pelican restaurant in Darlinghurst.

his year, though, expect one of our best loved restaurant starting dishes and aquacultural exports to get the recognition it deserves. As part of a grand plan, an industry association of 100 environmentally aware oyster farmers is creating an oyster trail running 300km along the pristine coastline of the NSW South Coast, from the Shoalhaven to Wonboyn Lake, near the Victorian border.

“It’s creating a whole experience,” says fifth-generation oyster farmer Ben Ralston. “All the way down you are going to be able to pull up and have an oyster experience, but it’s not only about oyster farmers, it’s about (the rest of the) community as well.”

He says tourism, both domestic and international, will highlight the bivalve through a tasting trail, 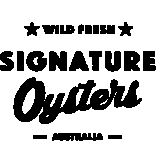 Ewan McAsh, along with Signature Oysters, has been featured on The Daily Telegraph article about a 300km oyster trail along the NSW coast -...

Ewan McAsh, along with Signature Oysters, has been featured on The Daily Telegraph article about a 300km oyster trail along the NSW coast -...