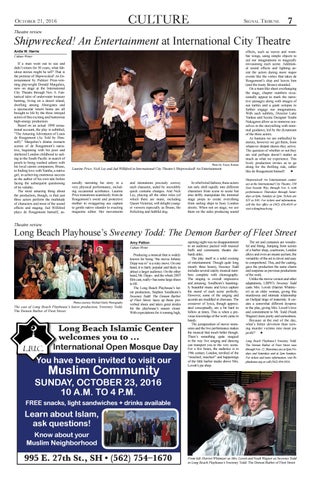 If a man went out to sea and didn’t return for 30 years, what fabulous stories might he tell? That is the premise of Shipwrecked! An Entertainment by Pulitzer Prize-winning playwright Donald Margulies, now on stage at the International City Theatre through Nov. 6. Fantastical tales of underwater treasure hunting, living on a desert island, dwelling among Aborigines and a spectacular return home are all brought to life by the three intrepid actors of this exciting and humorous high-energy production. Based on an actual 1898 sensational account, the play is subtitled, “The Amazing Adventures of Louis de Rougemont (As Told by Himself).” Margulies’s drama reenacts scenes of de Rougemont’s narrative, beginning with his poor and sheltered London childhood to sailing to the South Pacific in search of pearls to being washed ashore with his loyal canine companion, Bruno, to finding love with Yamba, a native girl, to achieving enormous success as the author of his own tale before facing the subsequent questioning of its validity. The most amazing thing about the production, though, is that just three actors perform the multitude of characters and most of the sound effects and staging. Jud Williford plays de Rougemont himself, as-

and intonations precisely convey each character, aided by incredibly quick costume changes. And Nick Ley, playing all the other roles (of which there are many, including Queen Victoria), will delight younger viewers especially as Bruno, the frolicking and faithful dog.

In whirlwind fashion, these actors not only shift rapidly into different characters from scene to scene but also deftly manipulate the minimal stage props to create everything from sailing ships to busy London streets. When not on stage, we see them on the sides producing sound

effects, such as waves and wombat wings, using simple objects to aid our imaginations in magically envisioning each scene. Additional sound effects and lighting assist the actors during more major events like the vortex that takes de Rougemont’s ship and leaves him (and the trusty Bruno) stranded. On a mast-like sheet overhanging the stage, chapter numbers occasionally appear to mark the narrative passages along with images of sea turtles and a giant octopus to further engage our imaginations. With such subtlety, Director Luke Yankee and Scenic Designer Tesshi Nakagawa allow us to immerse ourselves in the storytelling with minimal guidance, led by the dynamism of the three actors. As humans we are enthralled by stories, however we get them, from whatever distant shores they arrive. The question of whether or not they are real perhaps doesn’t matter as much as what we experience. This lively production invites us to go along for the thrilling ride, rather like de Rougemont himself. ✦ Shipwrecked! An Entertainment continues at the International City Theatre, 330 East Seaside Way, through Nov. 6, with performances Thursdays through Saturdays at 8pm, Sundays at 2pm. Tickets are $25 to $49. For tickets and information, call the box office at (562) 436-4610 or visit ictlongbeach.org.

Producing a musical that is widely known for being “the movie Johnny Depp was in” is a risky move. On one hand, it is fairly popular and likely to attract a larger audience. On the other hand, Mr. Depp– and the whole 2007 film cast, really– has some large shoes to fill. The Long Beach Playhouse’s latest production, Stephen Sondheim’s Sweeney Todd: The Demon Barber of Fleet Street, laces up those proverbial shoes and takes great strides for the playhouse’s season closer. With expectations for it running high,

You have been invited to visit our

opening night was no disappointment to an audience packed with musical buffs and community theatre diehards alike. The play itself is a solid evening of entertainment. Though quite long (nearly three hours), Sweeney Todd includes several catchy musical numbers complete with choreography. The singing is overall impressive and amusing. Sondheim’s hauntingly beautiful music and lyrics capture the mood of each scene perfectly. However, some of the singing and accents are muddled in choruses. The crossover of lyrics, though appreciated conceptually, are a bit hard to follow at times. This is when a previous knowledge of the work came in handy. The juxtaposition of movie memories and the live performance makes the musical that much better though. There’s something quite magical in the way live singing and dancing can transport you to the very scene. For a few hours, the audience is in 19th century London, terrified of the “mischief, mischief” and happenings of the little barber studio above Mrs. Lovett’s pie shop.

The set and costumes are wonderful and fitting. Jumping from scenes of a barber shop, courtroom, London alleys and even an insane asylum, the versatility of the set is clever and easy to comprehend. This, and the casting, gave the production the same charm and suspense as previous productions of the work. Unlike the movie version and other adaptations, LBPH’s Sweeney Todd casts Mrs. Lovett (Harriet Whitmyer) as an older woman, giving this murderous and intimate relationship an Oedipal tinge of maternity. It creates a somewhat different dynamic to the play, giving Mrs. Lovett’s love and commitment to Mr. Todd (Noah Wagner) more purity and earnestness. Because at the end of the day, what’s better devotion than turning murder victims into meat pie profit? ✦ Long Beach Playhouse’s Sweeney Todd: The Demon Barber of Fleet Street runs through Nov. 12. Showtimes are at 8pm Fridays and Saturdays and at 2pm Sundays. For tickets and more information, visit lbplayhouse.org or call (562) 494-1016.

Learn about Islam, ask questions! Know about your Muslim Neighborhood 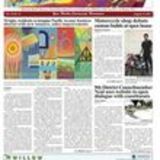