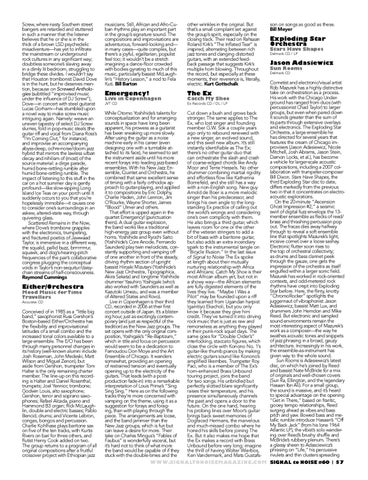 Screw, where nasty Southern street bangers are retarded and stuttered in such a manner that the listener believes that he or she is in the thick of a brown LSD psychedelic misadventure—has yet to infiltrate the mainstream or underground rock cultures in any significant way; doubtless someone’s slaving away in a dimly lit bedroom, struggling to bridge these divides. I wouldn’t say that Houston trombonist David Dove is in the hunt, but he deserves mention, because on Screwed Anthologies (subtitled “improvised music under the influence of DJ Screw”), Dove—in concert with steel guitarist Lucas Gorham—has stumbled upon a novel way to make screw music intriguing again. Namely: weave an uneven tapestry of select DJ Screw slurries, fold in pop-music steals (the guitar riff and vocal from Diana Ross’s “I’m Coming Out,” for instance), and improvise an accompanying abyss-deep, ochre-noise/doom jazz hybrid that mirrors the lawless urban decay and nihilism of (most) of the source material: a dirge parade, humid bone-rattling rumble after humid bone-rattling rumble. The impact of listening to this stuff in the car on a hot summer day is gently profound—like slow-sipping Long Island Ice Teas on your porch until it suddenly occurs to you that you’re hopelessly immobile—it causes one to consider one’s surroundings in an askew, altered-state way, through quivering glass. Scattered Remains in the Now, where Dove’s trombone grapples with the electronics, trumpeting, and fractured poetics of Jawwaad Taylor, is immersive in a different way, the squalid, pallid buzz, brrrrrrrrrur, squawk, and dog’s-hearing-pitch frequencies of the pair’s collaborative congress plugging the conceptual voids in Taylor’s non-sequitur/daisychain streams of half-consciousness. Raymond Cummings

Conceived of in 1985 as a “little big band,” saxophonist Russ Gershon’s Boston-based Either/Orchestra has the flexibility and improvisational latitudes of a small combo and the increased tonal colors available to a large ensemble. The E/O has been through many personnel changes in its history (well-known alumni include Josh Roseman, John Medeski, Matt Wilson and Miguel Zenon), but aside from Gershon, trumpeter Tom Halter is the only remaining charter member. The line-up on this recording is Halter and Daniel Rosenthal, trumpets; Joel Yennior, trombone; Godwin Louis, alto saxophone; Gershon, tenor and soprano saxophones; Rafael Alcada, piano and Hammond B3 organ; Rick McLaughlin, double and electric basses; Pablo Bencid, drums; and Vicente Lebron, congas, bongos and percussion. Charlie Kohlhase plays baritone sax on five of the ten tracks, with Kurtis Rivers on bari for three others, and flutist Henry Cook added on two. The group returns to a program of all original compositions after a fruitful crossover project with Ethiopian jazz

musicians. Still, African and Afro-Cuban rhythms play an important part in the group’s signature sound. The compositions and improvisations are adventurous, forward-looking and— in many cases—quite complex, but there’s a joyful, egalitarian, populist feel too; it wouldn’t be a stretch imagining a dance-floor crowded with bodies gyrating to much of this music, particularly bassist McLaughlin’s “History Lesson,” a nod to Fela Kuti. Bill Barton

other wrinkles in the original. But that’s a small complaint set against the group’s spirit, especially on the closing track. Their read on Rahsaan Roland Kirk’s “The Inflated Tear” is inspired, alternating between rich jazz tones and clanging distorted guitars, with an extended feedback passage that suggests Kirk’s multiple horn blowing. Throughout the record, but especially at these moments, their reverence is, literally, electric. Kurt Gottschalk

son on songs as good as these. Bill Meyer

Signal to Noise is the journal of improvised, experimental and unusual music