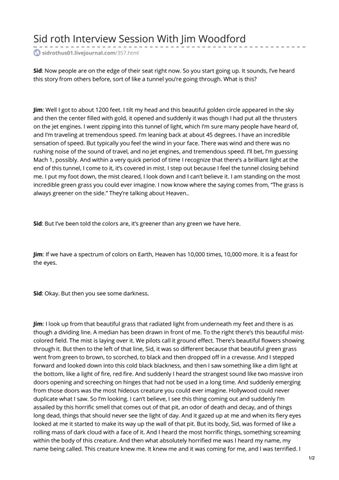 Sid: Now people are on the edge of their seat right now. So you start going up. It sounds, I’ve heard this story from others before, sort of like a tunnel you’re going through. What is this?

Jim: Well I got to about 1200 feet. I tilt my head and this beautiful golden circle appeared in the sky and then the center filled with gold, it opened and suddenly it was though I had put all the thrusters on the jet engines. I went zipping into this tunnel of light, which I’m sure many people have heard of, and I’m traveling at tremendous speed. I’m leaning back at about 45 degrees. I have an incredible sensation of speed. But typically you feel the wind in your face. There was wind and there was no rushing noise of the sound of travel, and no jet engines, and tremendous speed. I’ll bet, I’m guessing Mach 1, possibly. And within a very quick period of time I recognize that there’s a brilliant light at the end of this tunnel, I come to it, it’s covered in mist. I step out because I feel the tunnel closing behind me. I put my foot down, the mist cleared, I look down and I can’t believe it. I am standing on the most incredible green grass you could ever imagine. I now know where the saying comes from, “The grass is always greener on the side.” They’re talking about Heaven..

Sid: But I’ve been told the colors are, it’s greener than any green we have here.

Sid: Okay. But then you see some darkness.

Jim: I look up from that beautiful grass that radiated light from underneath my feet and there is as though a dividing line. A median has been drawn in front of me. To the right there’s this beautiful mistcolored field. The mist is laying over it. We pilots call it ground effect. There’s beautiful flowers showing through it. But then to the left of that line, Sid, it was so different because that beautiful green grass went from green to brown, to scorched, to black and then dropped off in a crevasse. And I stepped forward and looked down into this cold black blackness, and then I saw something like a dim light at the bottom, like a light of fire, red fire. And suddenly I heard the strangest sound like two massive iron doors opening and screeching on hinges that had not be used in a long time. And suddenly emerging from those doors was the most hideous creature you could ever imagine. Hollywood could never duplicate what I saw. So I’m looking. I can’t believe, I see this thing coming out and suddenly I’m assailed by this horrific smell that comes out of that pit, an odor of death and decay, and of things long dead, things that should never see the light of day. And it gazed up at me and when its fiery eyes looked at me it started to make its way up the wall of that pit. But its body, Sid, was formed of like a rolling mass of dark cloud with a face of it. And I heard the most horrific things, something screaming within the body of this creature. And then what absolutely horrified me was I heard my name, my name being called. This creature knew me. It knew me and it was coming for me, and I was terrified. I 1/2

mean, I want to tell you I stood there and wanted to do battle. I was terrified. And it reared up under that pit over me and the most hideous face imaginable, massive in its size, snarled at me. And there was this feeling of an anticipation of glee that it couldn’t wait to get its claws on me. And I was so horrified I turned from the darkness toward the light. We are creatures of the Light. And I automatically turned toward the Light, and when I did I sensed this creature, its breath on the back of my neck, the stench of its breath and I felt a sharp claw move down my back. And it was at that point, remember I said there are six words in the prayers of my family that make it possible for me to be here today, and the first three words I cried out in the truck, “God forgive me!” In my absolute terror, and I had no reason to expect any help from God, I turned myself toward that mist with that creature breathing up my back, and I looked at both hands and I cried out, “God help me! Help me!” And Sid, instantly three stars appeared in that mist like distant points of light, but coming rapidly toward me, and I focused on them to keep my mind off what was snarling behind me because I could hear the saliva from his jaws dropping on the ground behind me. And I concentrated on those lights. They came so rapidly, Sid, incredible speed. My pilot instincts took over. I was afraid they were going to make too fast a landing, but they did a beautiful job. They took form. They were angels. As they approached me, this beautiful light fluttered over me, went beyond me and struck that creature. And when the light of the angels struck the creature it scrambled back down in that hole like a rat running for cover. God had heard the cry of someone that had never turned to him in his life.

Sid: When we come back I want Jim to share about what Jesus as well as the angels have: transferrable sticky love. I’ve never heard about sticky love. Have you? 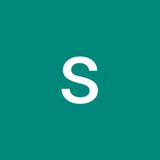 Now people are on the edge of their seat right now. So you start going up. It sounds, I’ve heard this story from others before, sort of like...

Now people are on the edge of their seat right now. So you start going up. It sounds, I’ve heard this story from others before, sort of like...