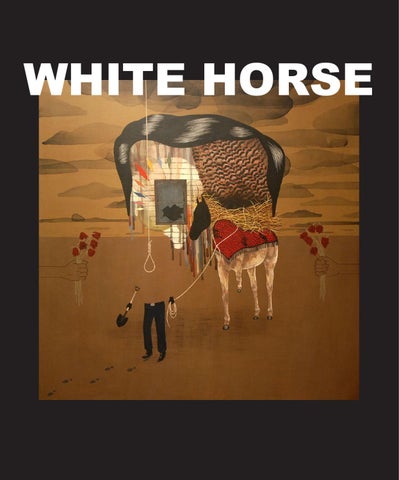 Sidebrow is a member of the Intersection Incubator, a program of Intersection for the Arts (www.theintersection.org) providing fiscal sponsorship, networking, and consulting for artists. Contributions and gifts to Sidebrow are tax-deductible to the extent allowed by law.

The following book was curated by Sidebrow, culling from contributions to White Horse and several other collaborative projects evolving on the Sidebrow Web site. We invite you to extend, reimagine, and respond creatively to what you see developing in this book and on our Web site. For new posts, emerging projects, and information on submitting work, visit www.sidebrow.net.

I became deeply indebted to confusion. You were on my mind, and that hurt me also. I will never see myself again. Alas, you could have hurt me. I could have fallen asleep. I could have become someone with tremendous powers. You really hated me. And I felt your hatred from miles away. You were a power in the sky that could have come, that might have come, if youâ&amp;#x20AC;&amp;#x2122;d wanted to, but only if youâ&amp;#x20AC;&amp;#x2122;d really wanted to. You were wearing a hat, walking across a road. You lived on a street. You were there. You were always there to be regarded, to be inflamed. A house on a hill, and there was home, and I was home. And I was there once, and I was intelligent, and you were born.

Dear S. That sounds exactly right: church made out of what looks like nothing when sober. Can understand the hallucinogenic, the sequencing of everything â&amp;#x20AC;&amp;#x201D; talented dancers, packed S&amp;M. That part that would have been self-consciousness was damaged. Watch and see how men think. Close to home something bigger was coming. No excuse for the tension of the possible storm. I miss you. Love, M.

Key into lock, and then she, into the room. The small paper bag against her chest holding her there. Dim light accepting her softly. The unmade bed. Long mirror. Expression that of one at a loss for the primacy within her, finding herself at the bedside table, placing the bag down, listening to the resultant rocking of the spoon. For a time, this dirty motel room, and she on the edge of it. The door across from the bed open, and she as if caught in the dark shadow inside, reluctant to recognize what telling and retelling have in common, an aggregate of images no longer on the surface, a configuration of something terribly wrong. The blinds and then the curtains. She at the mirror as if through a window. Expression that of one watching the brush along the side of the road for suggestion, peering into the negative space of a painting to see what is gone. The fan as it spins slowly above her. The rip in her dress. Thread from the hip seam, knee showing through. She reaches for the ribbon behind her neck, notices her body as if a body in the mirror, hoping for some synoptic judgment to stir inside her as she undoes the knot, brings the 4

parted ribbon around her throat, pauses at her chest to listen for a sound at the door she appears incapable of shaking, one she is unsure of having heard before.

The belt in his hand as he stands at the basin. Expression that of one lost at cross purposes. A syncope, some directive deep within him. Eyes on the awled holes, creased leather, the buckle in the light. A thought passes over his face. That of one hoping not to find himself in the corner of a room beyond envisioning before coming back to himself, feeding the belt through each loop of his pants, finding the hole, cinching it tight. The wet comb on the sink stand. Pill box, its open tabs beside. He pauses, buttoning his shirt. A quizzical expression beyond his image in the mirror. As if having remembered something false or forgotten about the window behind him, how it frames the shadows filling between objects, renders its particular means for witnessing the coming of night.

me through you jack on the way to her house I stoppped thinking, stopped receiving if you will because I had decided I would. I imagined her putting her hand next to my skin just to feel my heat. but that was the qustion. shade. “let’s meet for coffee” “why don’t I just come over your place” and she was easy for that. me thinking I’d drive all night just to be late. hten I was there. soon as I’m in the door, “let’s go out somewhere” “do we have to” “are you ashamed to be seen with me” “no, I just thought it might be interesting to see what’s in the other room” and I’m already so tired of the weight of you. the wait of you. the stare me down. avoiding myself for days at a time, but not for any of the good reasons. just trying to get through the day without losing my shit. and then I thought of the girl in the red dress from the night before. because you start thinking of people sometimes just to stop. you think of them and then you know and they they appear in front of you with their boyfriends and they and him, 8

god, well he was so nice jack. my btetter nature then. my happiness spread around the room. violins. singers drowned in the swell.

The underworld, a dark hallway littered with debris. The bedroom, where they always return. Small window, quilted spread, long mirror. All spaces are enclosed. Where a man and a woman come in and out, very quickly: a departure. Where a woman re-enters: a transitional space. A man creates a space, but refuses to live in it. A woman occupies the space, because she remembers inhabiting it as a child. If she had treated him differently, would she have noticed that he was not an angel? 10

This was what existed: the robins on the edge of the pond. This was how it ended: the centipede caught in a rug. This is how it evolved: the faucet running down brick. Is it a question of whatâ&amp;#x20AC;&amp;#x2122;s dead? The ecstasy of saints is the realization that they are water.

The second in our series of multi-author chapbooks curated from contributions to Sidebrow’s collaborative projects, White Horse threads the poetry and prose of 25 writers into an experimental narrative of the altered and its after effects.