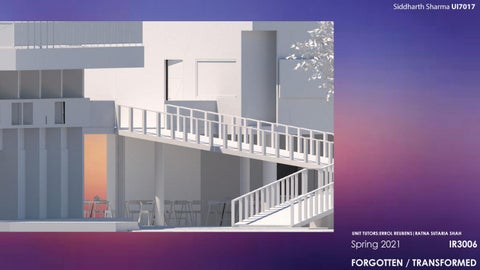 OF FLUX, FEATHER AND FLOSS

A CIVIC INITIATIVE CENTER OF LOCAL PRIDE AND PARTNERSHIP

The Ahmedabad Civic Initiative Center is intended to demonstrate the progressive and inclusive development initiatives that the civic body has been implementing. Its primary function is envisaged as a center where the people of the city and visitors are made aware, through exhibitions, the various civic infrastructure projects implemented as well as the new ones in the pipeline. The center will provide a people participatory platform for collaborating and brainstorming over projects concerning the city and its proposed public urban infrastructure projects.

For a visitor to the city of Ahmedabad, it will serve as a visitor’s center providing necessary information of its architectural and cultural heritage as well as its contemporary expressions.

XHIBIT SPACE_ PERMANENT EXHIBITION SPACE OF ‘THEN AND NOW’ OF ARCHITECTURAL LEGACY AND URBAN PROJECTS OF AHMEDABAD GALLERY SPACE_ GALLERY SPACE FOR TEMPORARY EXHIBITS BY ARTISTS AND ARTWORK WITH AHMEDABAD AS ITS SUBJECT. THE STUDIO WORKSHOP_ A MULTIFUNCTIONAL SPACE TO HOLD A GROUP OF MAX. 10 PEOPLE WHO WOULD BE PARTICIPATORY CIVIC COLLABORATORS AT A GIVEN POINT IN TIME TO DEBATE AND PROPOSE IDEAS ON DEVELOPMENT. CENTRE SUPPORT_RECEPTION SPACE, CURATOR’S/ MANAGER’S OFFICE, TOILETS, STORAGE SPACE FOR EXHIBITS. SYMBIOTIC PLUG-IN PROGRAMME_ AN URBAN PUBLIC PROGRAMME THAT PLUGS-IN WITH THE CORE FUNCTION. IT SHOULD ADDRESS EITHER THE IMMEDIATE CONTEXT OR THE LARGER CONTEXT OF CITY/ NEIGHBOURHOOD. SUPPORT PLUG-INS_CAFE, POP-UP SHOPS, SOUVENIER SHOP

4.0 TAILOR MADE 4.1 Building up a Narrative 4.2 Visualising the Guest into the Host 4.3 Program Details 4.4 Functional interrelationships

1.0 HIT IT OFF 1.1Readings_Subjective: Impressions Associate and express first impressions and multiple readings there of the site with metaphors/labels/captions of those assigned/ expressed attributes in the photographs. 1.2 Reflections_Subjective: Montage Thematic: take a combination of minimum 2-3 words and compose a montage depicting the emotive value of those words. 1.3 Reductions_Objective: Site Analysis Study the whole building in its entirety. It’s location within the city and immediate context + orientation + sun direction and its effect on the light quality + sound permeability(strictly through analytical diagrams and labels in drawings) Comparative scale study_ Fill the space with your imagination of things big, bigger, small, smallest to understand the scale and volume perception 4

2.0 TRICKS OF THE TRADE 2.1 Case Studies of adaptive reuse/Re-purpose type of projects. On the basis of1. Site forces that have influenced the decisions of the insertion. 2. Program. 3. Overall Design Principles/Philosophy/ Operative Stand The influences of the above 3 agents in the following resultant: 1. Organizational Strategy. 2. Movement/Circulation. 3. Volumes/ Levels. 4. Hierarchy of spaces(Private/Semi-Private/ Public). 5. Junction of Old and New structure. 6. Additions and Subtractions. 7. Openings and Apertures. 8. Materials and Details. 9. Services. 8

The Danish Maritime Museum had to find its place in a unique historic and spatial context between one of Denmark’s most important and famous buildings and a new, ambitious cultural centre.

Empire Stores is emblematic of Brooklyn’s transformation from lapsed industrial powerhouse into a growing creative sector.

The Peratallada Castle, located in the Baix Empordà (Catalonia, Spain) and considered for it’s historic-artistic value a National heritage building, preserve in its stonewalls a clear vestige of it’s medieval past.

A tram depot building occupied the project site, but that could have been called a relic even when it was built.

3.0 WINDS OF CHANGE 3.1Approach: Threshold + Connector Consider the built form with its context only and not its current function as a bus stop. We are considering a scenario where the role play of this building is no longer of a bus stop. 3.2 Interiority: Volume + Aperture STAGE 1: ANALYSIS OF ARTWORK STAGE 2: ITERATIONS OF INTERPRETATIONS Produce a series of iterations of your subjective interpretation of the rules derived by you from the given artwork. STAGE 3: CHANGING THE INTERIORITY AT THE SITE: Demonstrate your design using the principles extracted from the given artist to modulate the current Interiority of the given site. 3.3 Expansion: Addition + Connection Adding on to the work done in 3.1 and 3.2, we are in the third and last stage where we are working with the idea of expansion. Investigate through this exercise, the method, position and language of the expansion. It shall affect the given site, its form 14

4.0 TAILOR MADE 4.1 Building up a Narrative The given parameters for this projectThis is an image building exercise for AMC to be able to reach out/involve/partner with citizens or people of Ahmedabad to make a model Smart City and a model People- Participatory city. 4.2 Visualising the Guest into the Host A Multimedia photomontage of imaginative speculation on the given program 4.3 Program Details Enlist all the primary functions within your program. Also add all the subcomponents/ support functional areas to the primary function. 4.4 Functional interrelationships Make a visual story board of links/ interconnections between various functional areas of your program....suggesting a movement sequence and/or routes. 17

4.1 Building up a Narrative

The Plug-In Program will transform the Ahmedabad crowd by providing them exposure to the following . Support

The Best Countries to be a Social Entrepreneur, a 2016 report by Thomas Reuters Foundation, India ranked 14th, ahead of China, Australia and just behind Germany. What was more promising was that India ranked fifth in terms of ease of access to investment funding and eighth for grant funding. Social entrepreneurship is heading in the right direction with incubators bringing out the potential of social entrepreneurs across the country. While this goes to show that social entrepreneurship is heading in the right direction and with good momentum, there are still many roadblocks to social innovation. Funding, as clearly seen, is not a key problem. What causes our desi entrepreneurs to bog down is lack of public awareness (India ranks 34th in public understanding of what social entrepreneurs do), difficulty in working with the government, finding right talent, and scaling sustainably. The Social Incubation center is a place where people working in different fields throughout the Ahmedabad can come contributing to the civic projects that AMC is carrying out providing their inputs. It will lead to more involving and awareness among the people of Ahmedabad. Its also a place where skilled individuals or communities are provided a platform to get commissions on projects they can work on hence generating revenue and place of opportunities for the people of Ahmedabad.

. Awareness . Impact . Change . Learn The main aim of this program is to allow the full, rich and wonderful diversity of Ahmedabad People to flourish in complete freedom, while yet achieving an inner unity and experiencing a unified and harmonious society. and have accepted to work out their differences in a new and higher way, changing themselves instead of trying to change others as they seek to realize the ideal of human unity in diversity.

The Program aims at reclaiming public space means making busy areas amenable to human interaction. So that It allows seemingly disparate individuals to find themselves in close enough proximity to converse, learn from one another, and create community. Also Participating in public space means giving ourselves permission to look up from our screens and connect with people of different generations or different backgrounds. It eases the isolation and anonymity inherent in busy areas. The motivation for becoming a member to this program is that it is the best way to learn the practice (of innovation). The best way to access the knowledge is to interact with the community. What holds them together is a common sense of purpose and a real need to know what each other knows.

The Program achieves it by1.Envolving various Communities from throughout Ahmedabad 2.Envolve Individuals facing issues by educating them. 3.Publick and private Partnerships

building, and growth Representatives of humanity as a whole

This program will support people of Ahmedabad to: 1.Share and develop their knowledge of social enterprises and their context in Ahmedabad 2.Discuss live examples to deepen their understanding of the realities of running and being part of a social enterprise incubator, through peer learning 3.Interact and exchange experiences with incubators, incubatees and others who share goals of supporting sustainable social impact, providing an opportunity for collaboration and co-incubation

accepting and allowing the full, rich and wonderful diversity of mankind to flourish in complete freedom, while yet achieving an inner unity and experiencing a unified and harmonious society. Sometimes the human mix seems too much, too complex, as hidden tensions rise to the surface or old behaviour patterns take over, but actually it is perfect, just as it should be, if Auroville is to be a valid experiment representative of humanity as a whole. and have accepted to work out their differences in a new and higher way, changing themselves instead of trying to change others as they seek to realise the ideal of human unity in diversity. Support. Awareness. Impact. Change. Creating change

Creators are changemakers, and Unity is their platform for making an impact. Many creators around the globe are using Unity to tell stories or build tools that will have a positive and meaningful impact on society, their communities, and the planet. We founded Unity for Humanity to celebrate these creators and support their journey to change lives and improve our world.

4.2 Visualising the Guest into the Host

View of the Courtyard seen while entering the site

View of the site seen when entered from the busy road

View Leading to the cafe.

View of the Permanent Exhibition on the ground floor

View of the Display unit on the first floor exhibition space

Adaptive reuse is the act of finding a new purpose for an existing structure.