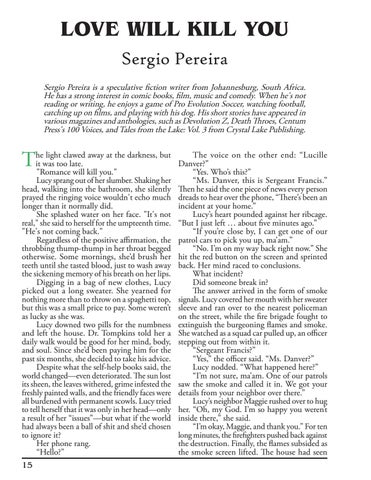 LOVE WILL KILL YOU Sergio Pereira Sergio Pereira is a speculative fiction writer from Johannesburg, South Africa. He has a strong interest in comic books, film, music and comedy. When he's not reading or writing, he enjoys a game of Pro Evolution Soccer, watching football, catching up on films, and playing with his dog. His short stories have appeared in various magazines and anthologies, such as Devolution Z, Death Throes, Centum Press's 100 Voices, and Tales from the Lake: Vol. 3 from Crystal Lake Publishing.

he light clawed away at the darkness, but it was too late. "Romance will kill you." Lucy sprang out of her slumber. Shaking her head, walking into the bathroom, she silently prayed the ringing voice wouldn't echo much longer than it normally did. She splashed water on her face. "It's not real," she said to herself for the umpteenth time. "He's not coming back." Regardless of the positive affirmation, the throbbing thump-thump in her throat begged otherwise. Some mornings, she’d brush her teeth until she tasted blood, just to wash away the sickening memory of his breath on her lips. Digging in a bag of new clothes, Lucy picked out a long sweater. She yearned for nothing more than to throw on a spaghetti top, but this was a small price to pay. Some weren’t as lucky as she was. Lucy downed two pills for the numbness and left the house. Dr. Tompkins told her a daily walk would be good for her mind, body, and soul. Since she’d been paying him for the past six months, she decided to take his advice. Despite what the self-help books said, the world changed—even deteriorated. The sun lost its sheen, the leaves withered, grime infested the freshly painted walls, and the friendly faces were all burdened with permanent scowls. Lucy tried to tell herself that it was only in her head—only a result of her “issues”—but what if the world had always been a ball of shit and she’d chosen to ignore it? Her phone rang. “Hello?” 15

The voice on the other end: “Lucille Danver?” “Yes. Who’s this?” “Ms. Danver, this is Sergeant Francis.” Then he said the one piece of news every person dreads to hear over the phone, “There’s been an incident at your home.” Lucy’s heart pounded against her ribcage. “But I just left … about five minutes ago.” “If you’re close by, I can get one of our patrol cars to pick you up, ma’am.” “No. I’m on my way back right now.” She hit the red button on the screen and sprinted back. Her mind raced to conclusions. What incident? Did someone break in? The answer arrived in the form of smoke signals. Lucy covered her mouth with her sweater sleeve and ran over to the nearest policeman on the street, while the fire brigade fought to extinguish the burgeoning flames and smoke. She watched as a squad car pulled up, an officer stepping out from within it. “Sergeant Francis?” “Yes,” the officer said. “Ms. Danver?” Lucy nodded. “What happened here?” “I’m not sure, ma’am. One of our patrols saw the smoke and called it in. We got your details from your neighbor over there.” Lucy’s neighbor Maggie rushed over to hug her. “Oh, my God. I’m so happy you weren’t inside there,” she said. “I’m okay, Maggie, and thank you.” For ten long minutes, the firefighters pushed back against the destruction. Finally, the flames subsided as the smoke screen lifted. The house had seen 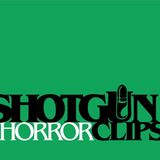