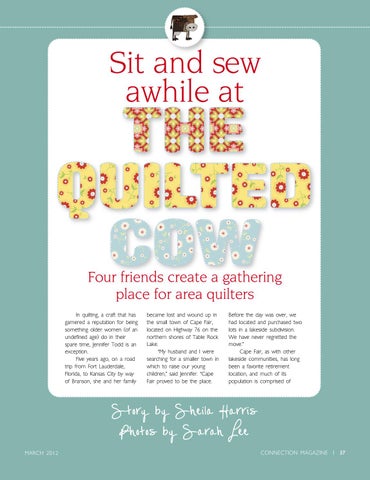 SPRING IS HERE! Remember to have your lawn mowers and weed trimmers serviced.

Sit and sew awhile at

235-7161 PROVIDING BRAND NAME QUALITY AND SERVICE AFTER THE SALE

Meet Coaltrain... He is a gorgeous, extremely friendly Pit Bull mix. He loves people, is gentle with children and cats and has had some obedience training. Coaltrain is approximately one year old. He has been neutered, vaccinated and microchipped and would make a loyal companion to a lucky person. If you are interested in adopting this pet or would like more information, visit www.HotoPets.org or give us a call!

In quilting, a craft that has garnered a reputation for being something older women (of an undefined age) do in their spare time, Jennifer Todd is an exception. Five years ago, on a road trip from Fort Lauderdale, Florida, to Kansas City by way of Branson, she and her family

This animal is sponsored by:

Before the day was over, we had located and purchased two lots in a lakeside subdivision. We have never regretted the move.” Cape Fair, as with other lakeside communities, has long been a favorite retirement location, and much of its population is comprised of

became lost and wound up in the small town of Cape Fair, located on Highway 76 on the northern shores of Table Rock Lake. “My husband and I were searching for a smaller town in which to raise our young children,” said Jennifer. “Cape Fair proved to be the place.

those who have moved in from other areas of the country. Jennifer, an outgoing blonde with a delightful Bostonian accent, who was in her 30s at the time of her move, soon made friends with many of the retirees. Ginny Wellong, a retired legal secretary, had moved into the same subdivision the previous year from Bullhead City, Arizona, after visiting and falling in love with the area. The following year, she was joined by her cousin, Joyce Lewis, who previously helped her husband run a bread delivery route in Arizona. In 2009, Judy Walker, an accomplished wood-worker who has amazed many a man with her ability to use both a skill saw and band saw, moved to the area from Platteville, Colorado, where she had been a rural mail carrier and owned her own woodcraft shop. The four ladies, who met through a Red Hat group, soon became fast friends and found numerous excuses to socialize. As a token of friendship, another neighbor, Betty McClain, an accomplished quilter and an instructor at Gibson Technical School in Reeds Spring, offered to give her neighbors a beginning sewing class. Although Ginny, Joyce and Judy had previous experience on a sewing machine, it was a new skill for Jennifer. “I had never sewn a stitch until I took that class,” said Jennifer, “but when I began to sew, it opened up a whole new field of interest for me. It became my passion.” Soon afterward, the friends joined Quilting Friends Quilting Guild, which held bi-weekly

meetings, and the ladies were given the opportunity to interact with other quilters from around the area. Although quilting has been around for centuries, quilt guilds have skyrocketed in popularity

busy spinning and weaving the fabric for their family’s clothing to have much time left over for quilting. However, when readymade fabrics became available for clothing, leftover scraps could be saved for quilts, or

they had minimal expectations. They were far more excited about the idea of providing a “gathering place” where quilters could come together to socialize, sew and share ideas. “Between us, we had all of

“And not only did we have to purchase a small quantity of a wide variety of fabric,” added Judy, “but we actually had to make more quilted projects, enough to stock our store with display items. There’s something

Maryann will be retiring, so The Quilted Cow will take over her floor space and move in a long-arm quilting machine operated by local resident L.B. Turner, who is currently doing business from his home.

The Quilted Cow will also periodically bring in other teachers for classes on such topics as fabric dyeing, Frenchbraid quilting, needle-turn applique, jewelry making and scrapbooking.

same day, and customers are able to travel from one shop to another to get in on special buys and door prizes. The Quilted Cow will be celebrating the Grand ReOpening of its expanded shop

the know-how to run a business, and the thought of providing a local source for area quilters to purchase their quilting supplies really appealed to us,” said Ginny. “Plus, it sounded like fun.” It didn’t take the foursome long to cement their decision, but the preparation required before actually opening The Quilted Cow, the name of their new enterprise, was extensive. “We were on a shoe-string budget,” explained Joyce. “We couldn’t buy entire bolts of any one fabric. We could only buy five yards at a time of the many varieties that we selected. Then we had to come back and roll each of those five-yard flats onto cardboard skeins in order to provide easy viewing and measuring for our prospective customers.”

about seeing a completed project, which fires a person’s imagination much more than just seeing a bolt of fabric.” The women are now beginning to see the results of their labor. “Ladies from many different quilting guilds come from miles around, because they have heard of the large variety of fabrics and projects we stock,” said Ginny. “Of course, being on the road to Branson doesn’t hurt anything either.” “And we can buy our fabric by the bolt now,” said Judy, laughing. In fact, expansion plans are now in The Quilted Cow’s future. With more business than the ladies could have ever imagined, the shop is quickly becoming a favorite with quilters from all over. Florist

“We will then have a full service quilt shop,” said Jennifer. “After expanding, we plan to offer a wide variety of day-time classes, either free or for a minimal charge. People will be able to come in, buy their fabric, learn to quilt and have their finished product quilted by our long-arm operator, all on the same premises.”

According to Jennifer, The Quilted Cow also hosts awesome parties at various intervals throughout the year, with lots of drawings, door prizes and refreshments offered. They also participate in what are known as “shop hops” in which several quilt shops in the general area coordinate to host special events on the

on Friday, March 9. The event will offer special sales, door prizes and drawings. “Our parties are always so much fun,” said Jennifer. “Even if you don’t buy anything, you get to visit with other quilters, enjoy some goodies and win door prizes. We enjoy our customers, and this party is our thank-you to them.”

Quilting is a very calming craft, and its effect on me has been amazing. Not to mention the benefit of all of the quality friendships I’ve formed along the way.”

Jennifer Todd over the last 25 years. A quilt guild is an organized group of quilters that meets on a regular basis, usually monthly, for the purpose of sharing with, and learning from each other. Guild members often participate in community projects, including quilt shows, where they display and sell the quilts they make. With a background in photography and business management, Jennifer found the quilting world to be something entirely new. “Quilting is a very calming craft,“ said Jennifer, “and its effect on me has been amazing. Not to mention the benefit of all of the quality friendships I’ve formed along the way.” Although quilt-making is an art that has been practiced for centuries, until the mid-1800’s when the textile-manufacturing industry came into its own, quilting was usually something reserved for wealthier ladies who had more leisure time. Prior to then, women were too

fabric could be purchased especially for the purpose of quilting. With the variety of patterns limited only by a seamstress’ imagination, quilting offers a form of creative expression like no other. Although many women like to design their own quilt patterns, some prefer traditional triedand-true patterns, such as Log Cabin, Drunkard’s Path and Double Wedding Ring. After logging plenty of hours at their sewing machines and realizing the positive social aspect of quilting, the ladies in Cape Fair wanted to form an outlet for quilters and a source for quilting supplies. When local resident and former school principal, Maryann Broomfield, had a new building constructed to house her floral shop, she offered the other end of the structure for rent. For the first time, the four ladies considered the idea of opening a quilt shop together. From a business standpoint,

Specialty classes that The Quilted Cow will soon be offering include: “PAPER-PIECING” and “JACKET-MAKING” offered by Ginny. “SNAP SACK KITS,” which are mini quilt kits in a bag, and “BORDERS AND BINDINGS” offered by Joyce. “ART TO HEART” and “RAG QUILTING” offered by Judy. “BEGINNING QUILTING” (a free class), “PATCH ABILITIES” and “FABRIC ORIGAMI” offered by Jennifer.

The Quilted Cow, which is located at 8936 W. Highway 76 in Cape Fair, is open from 10 a.m. to 4 p.m. Monday through Saturday. Additional information is avaliable at www.thequilted cow.com. CONNECTION MAGAZINE | 39