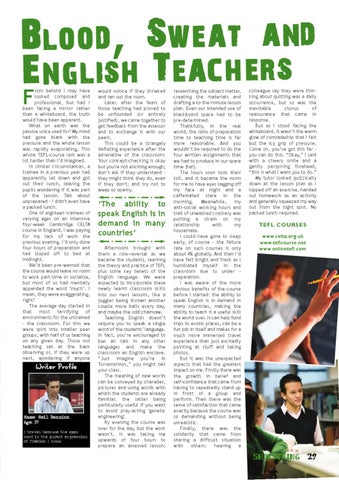 B L o oD , S W ea T aN D eF NG Li Sh T ea C h er S rom behind I may have looked composed and professional, but had I been facing a mirror rather than a whiteboard, the truth would have been apparent. What on earth was the passive voice used for? My mind had gone blank with the pressure and the whole lesson was rapidly evaporating. This whole TEFL-course lark was a lot harder than I’d imagined. In similar circumstances, a trainee in a previous year had apparently sat down and got out their lunch, leaving the pupils wondering if it was part of the lesson. Talk about unprepared - I didn't even have a packed lunch. One of eighteen trainees of varying ages on an intensive four-week Cambridge CELTA course in England, I was paying for my lack of work the previous evening. I’d only done four hours of preparation and had sloped off to bed at midnight. We’d been pre-warned that the course would leave no room to work part-time or socialise, but most of us had mentally appended the word ‘much’. I mean, they were exaggerating, right? The average day started in that most terrifying of environments for the untrained – the classroom. For this we were split into smaller peer groups, with half of us teaching on any given day. Those not teaching sat at the back observing or, if they were up next, wondering if anyone

Name: Neil Bennion Age: 37 I travel because the open road is the purest expression of freedom I know.

would notice if they shrieked and ran out the room. Later, after the fears of those teaching had proved to be unfounded (or entirely justified), we came together to get feedback from the assessor and to exchange it with our peers. This could be a strangely deflating experience after the adrenaline of the classroom: Your concept-checking is okay but you're not eliciting enough; don’t ask if they understand – they might think they do, even if they don't; and try not to weep so openly.

‘The ability to speak English is in demand in many countries’ Afternoons brought with them a role-reversal as we became the students, learning the theory and practice of TEFL plus some key tenets of the English language. We were expected to incorporate these newly learnt classroom skills into our next lessons, like a juggler being thrown another couple more balls every day, and maybe the odd chainsaw. Teaching English doesn’t require you to speak a single word of the students’ language. In fact, you’re encouraged to ban all talk in any other languages and make the classroom an English enclave. “Just imagine you’re in Torremolinos,” you might tell your class. The meaning of new words can be conveyed by charades, pictures and using words with which the students are already familiar, the latter being particularly useful if you want to avoid play-acting 'genetic engineering'. By evening the course was over for the day, but the work wasn’t. It was taking me upwards of four hours to prepare an assessed lesson;

researching the subject matter, creating the materials and drafting a to-the-minute lesson plan. Even our intended use of blackboard space had to be pre-determined. Thankfully, in the real world, the ratio of preparation time to teaching time is far more reasonable. And you wouldn’t be required to do the four written assignments that we had to produce in our spare time (ha!). The hours soon took their toll, and it became the norm for me to have eyes sagging off my face at night and a caffeinated stare in the morning. Meanwhile, my anti-social working hours and trail of unwashed crockery was putting a strain on my relationship with my housemate. I could have gone to sleep early, of course - the failure rate on such courses is only about 4% globally. And then I’d have felt bright and fresh as I humiliated myself in the classroom due to under preparation. I was aware of the more obvious benefits of the course before I started: the ability to speak English is in demand in many countries, making the ability to teach it a useful skill the world over. It can help fund trips to exotic places, can be a fun job in itself and makes for a much more immersed travel experience than just excitedly pointing at stuff and taking photos. But it was the unexpected aspects that had the greatest impact on me. Firstly there was the growth in belief and self-confidence that came from having to repeatedly stand up in front of a group and perform. Then there was the sense of satisfaction that came exactly because the course was so demanding without being unrealistic. Finally, there was the solidarity that came from sharing a difficult situation with others: hearing a

colleague say they were thinking about quitting was a daily occurrence, but so was the inevitable chorus of reassurance that came in response. But as I stood facing the whiteboard, it wasn’t the warm glow of comradeship that I felt but the icy grip of pressure. Come on, you’ve got this far you can do this. “Okay,” I said with a cheery smile and a gently perspiring forehead, “this is what I want you to do.” My tutor looked quizzically down at the lesson plan as I lopped off an exercise, handed out homework as an activity and generally squeezed my way out from the tight spot. No packed lunch required. 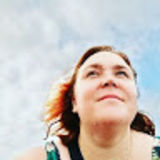