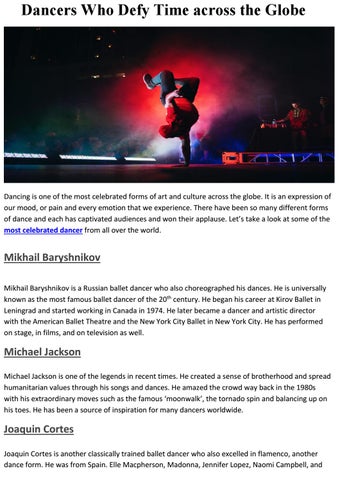 Mikhail Baryshnikov Mikhail Baryshnikov is a Russian ballet dancer who also choreographed his dances. He is universally known as the most famous ballet dancer of the 20th century. He began his career at Kirov Ballet in Leningrad and started working in Canada in 1974. He later became a dancer and artistic director with the American Ballet Theatre and the New York City Ballet in New York City. He has performed on stage, in films, and on television as well.

Michael Jackson Michael Jackson is one of the legends in recent times. He created a sense of brotherhood and spread humanitarian values through his songs and dances. He amazed the crowd way back in the 1980s with his extraordinary moves such as the famous ‘moonwalk’, the tornado spin and balancing up on his toes. He has been a source of inspiration for many dancers worldwide.

Joaquin Cortes Joaquin Cortes is another classically trained ballet dancer who also excelled in flamenco, another dance form. He was from Spain. Elle Macpherson, Madonna, Jennifer Lopez, Naomi Campbell, and

Mira Sorvino are among a few of the fans who admired his sensual moves and his expression as he danced in Ecstasy.

Shakira Shakira is a multi-talented asset to the entertainment industry. She has shown her excellence in singing, dancing, as a lyricist, record producer, model, and choreographer. She has Belly dancing, Latin, rock and roll and Arabic influences in her perfect moves. She is a wonder and has continued to enchant us with her songs and albums flawlessly.

Hrithik Roshan Bollywood Star Hrithik Roshan has rocked every stage that he has even danced upon. He is versatile, innovative and has no equal. He can perform very complicated steps with great ease. His facial expressions remain unmatched. He is graceful and very talented.

Martha Graham Martha Graham is perhaps the first artist to perform for an event in the White House. She is a unique dancer and choreographer and choreographed over 150 shows in her life. She explored the wide range of human experience. She was the first to travel abroad as a cultural ambassador and to receive the highest civilian award which is known as the Medal of Freedom. She received many honors such as receiving the key to the City of Paris and Japanâ&#x20AC;&#x2122;s Imperial Order of the Precious Crown. Her work is always intense, passionate and transcendental. These are some of the most eminent performers in the world. They have shown us how talented they really are by setting the stage on fire with their sizzling and suave moves. I hope you liked this blog! To book dancers for the New Year party or any other event, please visit StarClinch (Indiaâ&#x20AC;&#x2122;s No. 1 artist and celebrity booking website). 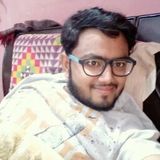 In this file, you will come to know about the dancers who defy time across the globe.

In this file, you will come to know about the dancers who defy time across the globe.