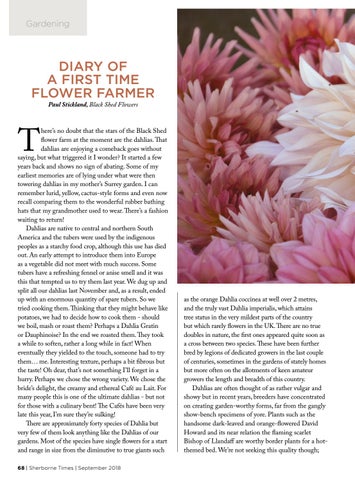 here’s no doubt that the stars of the Black Shed flower farm at the moment are the dahlias. That dahlias are enjoying a comeback goes without saying, but what triggered it I wonder? It started a few years back and shows no sign of abating. Some of my earliest memories are of lying under what were then towering dahlias in my mother’s Surrey garden. I can remember lurid, yellow, cactus-style forms and even now recall comparing them to the wonderful rubber bathing hats that my grandmother used to wear. There’s a fashion waiting to return! Dahlias are native to central and northern South America and the tubers were used by the indigenous peoples as a starchy food crop, although this use has died out. An early attempt to introduce them into Europe as a vegetable did not meet with much success. Some tubers have a refreshing fennel or anise smell and it was this that tempted us to try them last year. We dug up and split all our dahlias last November and, as a result, ended up with an enormous quantity of spare tubers. So we tried cooking them. Thinking that they might behave like potatoes, we had to decide how to cook them - should we boil, mash or roast them? Perhaps a Dahlia Gratin or Dauphinoise? In the end we roasted them. They took a while to soften, rather a long while in fact! When eventually they yielded to the touch, someone had to try them… me. Interesting texture, perhaps a bit fibrous but the taste! Oh dear, that’s not something I’ll forget in a hurry. Perhaps we chose the wrong variety. We chose the bride’s delight, the creamy and ethereal Café au Lait. For many people this is one of the ultimate dahlias - but not for those with a culinary bent! The Cafés have been very late this year, I’m sure they’re sulking! There are approximately forty species of Dahlia but very few of them look anything like the Dahlias of our gardens. Most of the species have single flowers for a start and range in size from the diminutive to true giants such 68 | Sherborne Times | September 2018

as the orange Dahlia coccinea at well over 2 metres, and the truly vast Dahlia imperialis, which attains tree status in the very mildest parts of the country but which rarely flowers in the UK. There are no true doubles in nature, the first ones appeared quite soon as a cross between two species. These have been further bred by legions of dedicated growers in the last couple of centuries, sometimes in the gardens of stately homes but more often on the allotments of keen amateur growers the length and breadth of this country. Dahlias are often thought of as rather vulgar and showy but in recent years, breeders have concentrated on creating garden-worthy forms, far from the gangly show-bench specimens of yore. Plants such as the handsome dark-leaved and orange-flowered David Howard and its near relation the flaming scarlet Bishop of Llandaff are worthy border plants for a hotthemed bed. We’re not seeking this quality though;