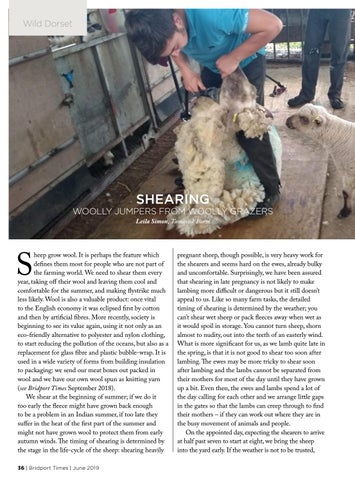 heep grow wool. It is perhaps the feature which defines them most for people who are not part of the farming world. We need to shear them every year, taking off their wool and leaving them cool and comfortable for the summer, and making flystrike much less likely. Wool is also a valuable product: once vital to the English economy it was eclipsed first by cotton and then by artificial fibres. More recently, society is beginning to see its value again, using it not only as an eco-friendly alternative to polyester and nylon clothing, to start reducing the pollution of the oceans, but also as a replacement for glass fibre and plastic bubble-wrap. It is used in a wide variety of forms from building insulation to packaging: we send our meat boxes out packed in wool and we have our own wool spun as knitting yarn (see Bridport Times September 2018). We shear at the beginning of summer; if we do it too early the fleece might have grown back enough to be a problem in an Indian summer, if too late they suffer in the heat of the first part of the summer and might not have grown wool to protect them from early autumn winds. The timing of shearing is determined by the stage in the life-cycle of the sheep: shearing heavily 36 | Bridport Times | June 2019

pregnant sheep, though possible, is very heavy work for the shearers and seems hard on the ewes, already bulky and uncomfortable. Surprisingly, we have been assured that shearing in late pregnancy is not likely to make lambing more difficult or dangerous but it still doesn’t appeal to us. Like so many farm tasks, the detailed timing of shearing is determined by the weather; you can’t shear wet sheep or pack fleeces away when wet as it would spoil in storage. You cannot turn sheep, shorn almost to nudity, out into the teeth of an easterly wind. What is more significant for us, as we lamb quite late in the spring, is that it is not good to shear too soon after lambing. The ewes may be more tricky to shear soon after lambing and the lambs cannot be separated from their mothers for most of the day until they have grown up a bit. Even then, the ewes and lambs spend a lot of the day calling for each other and we arrange little gaps in the gates so that the lambs can creep through to find their mothers – if they can work out where they are in the busy movement of animals and people. On the appointed day, expecting the shearers to arrive at half past seven to start at eight, we bring the sheep into the yard early. If the weather is not to be trusted,