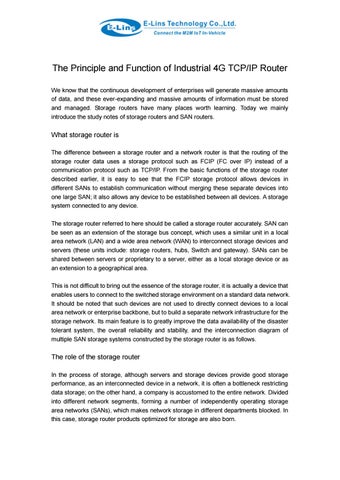 The Principle and Function of Industrial 4G TCP/IP Router We know that the continuous development of enterprises will generate massive amounts of data, and these ever-expanding and massive amounts of information must be stored and managed. Storage routers have many places worth learning. Today we mainly introduce the study notes of storage routers and SAN routers.

What storage router is The difference between a storage router and a network router is that the routing of the storage router data uses a storage protocol such as FCIP (FC over IP) instead of a communication protocol such as TCP/IP. From the basic functions of the storage router described earlier, it is easy to see that the FCIP storage protocol allows devices in different SANs to establish communication without merging these separate devices into one large SAN; it also allows any device to be established between all devices. A storage system connected to any device. The storage router referred to here should be called a storage router accurately. SAN can be seen as an extension of the storage bus concept, which uses a similar unit in a local area network (LAN) and a wide area network (WAN) to interconnect storage devices and servers (these units include: storage routers, hubs, Switch and gateway). SANs can be shared between servers or proprietary to a server, either as a local storage device or as an extension to a geographical area. This is not difficult to bring out the essence of the storage router, it is actually a device that enables users to connect to the switched storage environment on a standard data network. It should be noted that such devices are not used to directly connect devices to a local area network or enterprise backbone, but to build a separate network infrastructure for the storage network. Its main feature is to greatly improve the data availability of the disaster tolerant system, the overall reliability and stability, and the interconnection diagram of multiple SAN storage systems constructed by the storage router is as follows.

The role of the storage router In the process of storage, although servers and storage devices provide good storage performance, as an interconnected device in a network, it is often a bottleneck restricting data storage; on the other hand, a company is accustomed to the entire network. Divided into different network segments, forming a number of independently operating storage area networks (SANs), which makes network storage in different departments blocked. In this case, storage router products optimized for storage are also born.

The main feature of the storage router is that it greatly improves the data availability of the disaster tolerant system, the overall reliability and stability, and the interconnection of multiple SAN storage systems built by the storage router. The continuous development of enterprises will generate massive amounts of data, and these ever-expanding and massive amounts of information must be stored and managed. In the process of storage, although the server and the storage device provide good storage performance, as an interconnected device in the network, it is often a bottleneck restricting data storage; on the other hand, often a business is used to the whole The network is divided into different network segments, forming a plurality of independently operated storage area networks (SANs), which makes the network storage of different departments blocked. Storage router products optimized for storage are very important for enterprises, and network administrators must be proficient. From the classification of routers, the grades are divided into high, medium and low-end routers, and from a structural point of view, modular routers and non-modular routers,

The common categories are as follows: First, the structure is divided into non-modular routers and modular routers. Usually the mid- to high-end routers are modular and the low-end routers are non-modular. The modular structure allows for flexible router configuration to accommodate the ever-increasing business needs of the enterprise, and non-modular ones can only provide fixed ports. From performance, it can be divided into wire-speed routers and non-wire-speed routers. The so-called line-speed router is completely capable of smooth transmission according to the bandwidth of the transmission medium, basically without interruption and delay. Usually wire-speed routers are high-end routers with very high port bandwidth and data forwarding capabilities, capable of forwarding packets at media rates; low-end routers are non-wire-speed routers. But some new broadband access routers also have wire-speed forwarding capabilities. Functionally, routers can be divided into enterprise routers, backbone routers, and access routers. (1) Enterprise-class routers connect many terminal systems and have many connection objects, but the system is relatively simple and the data traffic is small. The requirements for such routers are to implement as many end-point interconnections as possible in a cheap way. Requirements to support different quality of service.

(2) The backbone router is a key device for realizing enterprise-level network interconnection. It has a large data throughput and is very important. The basic performance requirements for backbone routers are high speed and high reliability. In order to achieve high reliability, network systems generally adopt traditional redundancy technologies such as hot backup, dual power supply, and dual data path, so that the reliability of the backbone router is generally not a problem. (3) Access-level routers are mainly used to connect small business customer groups within a home or ISP. The modular router is usually divided into border routers and intermediate node routers according to the location of the network. It is obvious that border routers are at the edge of the network and are used for connections of different network routers; intermediate routers are in the middle of the network, which are usually used to connect different networks and serve as a bridge for data forwarding. Because the network location of each is different, its main performance has a corresponding focus, such as the intermediate node router because it has to face a variety of networks. Identifying the nodes in these networks depends on the MAC address memory function of these intermediate node routers. For the above reasons, when selecting the intermediate node modular router, it is necessary to pay more attention to the MAC address memory function, that is, to require a modular router with a larger cache and a stronger MAC address memory capability. However, because the border router may accept data from many different network routers at the same time, this requires the bandwidth of the backplane of the border router to be wide enough, which of course depends on the network environment in which the border router is located. To know more please visit E-Lins Technology 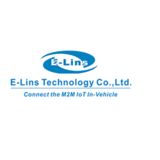 The Principle and Function of Industrial 4G TCP/IP Router

The Principle and Function of Industrial 4G TCP/IP Router