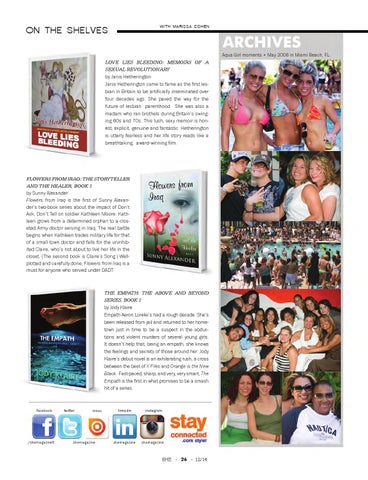 Love Lies Bleeding: Memoirs of a Sexual Revolutionary by Janis Hetherington Janis Hetherington came to fame as the first lesbian in Britain to be artificially inseminated over four decades ago. She paved the way for the future of lesbian parenthood. She was also a madam who ran brothels during Britain’s swinging 60s and 70s. This lush, sexy memoir is honest, explicit, genuine and fantastic. Hetherington is utterly fearless and her life story reads like a breathtaking, award-winning film.

Flowers from Iraq: The Storyteller and the Healer, Book 1 by Sunny Alexander Flowers from Iraq is the first of Sunny Alexander’s two-book series about the impact of Don’t Ask, Don’t Tell on soldier Kathleen Moore. Kathleen grows from a determined orphan to a closeted Army doctor serving in Iraq. The real battle begins when Kathleen trades military life for that of a small town doctor and falls for the uninhibited Claire, who’s not about to live her life in the closet. (The second book is Claire’s Song.) Wellplotted and carefully done, Flowers from Iraq is a must for anyone who served under DADT.

The Empath: The Above and Beyond Series, Book 1 by Jody Klaire Empath Aeron Lorelei’s had a rough decade. She’s been released from jail and returned to her hometown just in time to be a suspect in the abductions and violent murders of several young girls. It doesn’t help that, being an empath, she knows the feelings and secrets of those around her. Jody Klaire’s debut novel is an exhilarating rush, a cross between the best of X Files and Orange is the New Black. Fast-paced, sharp, and very, very smart, The Empath is the first in what promises to be a smash hit of a series. 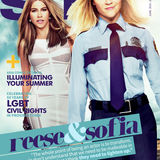