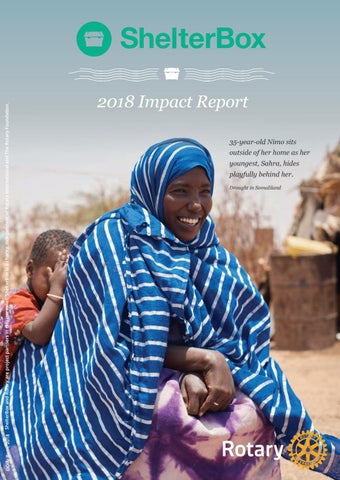 @Olly Burn, 2018 ShelterBox and Rotary are project partners in disaster relief. ShelterBox is a charity, independent of Rotary International and The Rotary Foundation.

outside of her home as her

Thank you YOUR SUPPORT HAS HELPED US PROVIDE SHELTER AND LIFE-SAVING ITEMS FOR 42,000 FAMILIES ROBBED OF THEIR HOMES BY DISASTER AND CONFLICT. THAT’S 210,000 PEOPLE HELPED ON THE ROAD TO REBUILDING AND RECOVERY.

When disaster strikes, normal life stops. Good quality shelter cuts through the chaos and provides protection from burning heat, bitter cold, dangerous animals and disease. It’s the first step on the road to recovery. When people don’t have to keep moving and worrying about where their family will sleep, they can begin putting their lives back together by earning a living, sending their children to school and rebuilding their homes and communities. The following pages reveal the stories of a few of the families that we’ve been able to help this year, none of which would have been possible without your incredible support. Together we can go further and amplify our impact in the world. Thank you.

In August and September this year, Indonesia was hit by two devastating earthquakes and a tsunami. Across the islands of Lombok and Sulawesi, half a million people were displaced. ShelterBox responded here on both occasions, providing shelter and support to some of the most vulnerable and isolated communities.

With the support of our incredible Rotary partners, we worked with the Indonesian government on both occasions to help families in remote villages that were left with nothing. Weâ&amp;#x20AC;&amp;#x2122;ve distributed much needed tents, water purification sets, water carriers and mosquito nets to communities which had been without electricity and other necessities for days, using every mode of transport at our disposal. Erti lives with her husband Jonathon, her two children, and her two-year-old granddaughter in the small village of Puroo about 60 kilometers north of Palu. It doesnâ&amp;#x20AC;&amp;#x2122;t appear on most maps.

IN INDONESIA 1,293 FAMILIES HAVE BEEN SUPPORTED WITH

The Lake Chad Basin is an area in crisis. Spanning four of the world’s poorest countries, including Nigeria, Niger, Chad and Cameroon, the Lake Chad Basin humanitarian crisis has left millions of local people devastated, homeless and malnourished - yet this ‘forgotten crisis’ has gone largely unreported.

Extreme poverty, underdevelopment, and climate change are just some of the factors at play, alongside growing insecurity caused by attacks of extremist militant group Boko Haram. The terrorist organization has raged violent conflict in Nigeria since 2009, which has spread to neighboring countries of Chad, Cameroon and Niger. Over half of those in the affected area are in need of support. Families are living in overcrowded camps in which there are food and water shortages, unhygienic living conditions, limited privacy, cholera epidemics and overall insecurity. Ongoing Rotary support enables ShelterBox to respond to this forgotten crisis&#39;. In 2018 we have been able to continue our work with four other in-country aid agencies, to distribute water carriers, blankets, tarpaulins, kitchen sets, buckets and solar powered lights to the region.

SHELTERBOX HAS SUPPORTED 8,279 FAMILIES ACROSS THE LAKE CHAD BASIN 4

Since 2011, the conflict in Syria has displaced over five million people and claimed the lives of over half a million people. Many fled with nothing but the clothes on their backs, their homes destroyed and their families torn apart. While the course of the conflict seems to change daily in the headlines, the situation on the ground remains desperate with only a fraction of the displaced population receiving the aid they urgently need. ShelterBox has so far sheltered over 36,394 families affected by the conflict. However, the situation is complex and our support has reflected that, with aid ranging from our iconic tents and ShelterKits to blankets, cooking utensils and water filters. Through our implementing partners weâ&amp;#x20AC;&amp;#x2122;ve been able to help inspire hope in people who have lost everything.

Bombing by planes forced Ahmad, his wife, and eight children from their house in a village in the Northern Syria. Fleeing their home, unable to take any possessions, they found refuge in a neighboring village. The situation continued to deteriorate and a week later they had to move again due to renewed shelling.

Today, an estimated 2.1 million people are internally displaced across Somalia. Ongoing drought and conflict have caused internally displaced people to be driven towards urban areas causing overcrowding and pressure on resources, creating a significant need for humanitarian assistance.

Somaliland has 2 rainy seasons, April-June and OctoberNovember. The last rainy season was below average for the fourth consecutive season. The majority of rural communities in Somaliland are nomadic pastoralists. Extreme weather is the biggest threat to pastoralists, with 85% livestock lost last year. Some reports indicate that 9 million livestock have died across the country. The continuing drought has forced communities to move increasingly large distances to seek fresh food for their animals and consequently, these communities are now displaced and destitute.

Muna Yusuf Adan is a farmer and lives with her husband, five children, and disabled brother-in-law. The family had 150 livestock, but with the severe drought, most of her animals died, leaving her with only two goats and two camels.

ShelterBox and our in-country partner ActionAid have coordinated a three-phase response to deliver aid to the most vulnerable.

Phase three of this project includes distribution of tarps, rope and tool bags. This distribution has been adapted to meet the specific needs of nomadic communities, like Muna&#39;s.

â&amp;#x20AC;&amp;#x153;I opened it and I saw the utensils, the tarp, and all the materials. I felt very happy as it was all very useful. - Muna

SHELTERBOX HAS SUPPORTED 3,441 FAMILIES SO FAR 6

The Philippines is one of the world’s most disaster affected countries. In 2018 we worked with Rotary to create ShelterBox Operations Philippines, with the aim of helping get vital emergency shelter to vulnerable families even more quickly. This year, ShelterBox first responded to tropical storm Kai Tak in January and then to the category 5 strength Super Typhoon Mangkhut in September. Typhoon Mangkhut’s strength badly damaged power and communication networks and significant rainfall exacerbated normal monsoon conditions, resulting in flooding and landslides in the mountainous areas of Luzon.

In response to these typhoons ShelterBox distributed aid to 1,999 families. The aid packages varied depending on the location, with some made up of 1 ShelterKit, 2 solar lights and hurricane strapping and others made up of traditional ShelterBoxes. We worked in partnership with local Rotary clubs on both responses. Dindin Morillo, Past President of the Rotary Club of Biliran Island said, “ShelterBox extended help that meets the needs of the people. We Rotarians, especially those on Biliran Island have local knowledge of whom to help, including who to talk to in order to bring the help in a timely manner.”

I was so happy to have a home again. - Lily

ACROSS 2018 SHELTERBOX HAS SUPPORTED 1,999 FAMILIES IN THE PHILIPPINES 7

ShelterBox was started by volunteers and while our organization has grown, our volunteers are still the lifeblood of ShelterBox. With the help of our amazing network of volunteers, our aid is hand-packed with care before transportation. Our Ambassadors serve as the face of ShelterBox in their communities and they provide the critical link between donors and the families we serve.

Our highly trained ShelterBox Response Teams then go the extra mile to find the people left most vulnerable after a disaster to make sure that no one gets forgotten or left behind. VOLUNTEER ROLES AMBASSADOR - Engage and activate across every level – fundraising, awareness and action CHANGEMAKER - Fundraise to support our mission ADVOCATE - Use your voice to amplify our message ROTARY CLUB CHAMPION - A Rotarian who wants to share ShelterBox’s message with their club

Serve as a Club Champion

Serve on the Response Team www.ShelterBoxUSA.org

MEASURING OUR IMPACT Shelter means more than just tents and tarps. It’s a process of recovery. How do we know if we’re contributing to the recovery process? We go back to the communities we helped in the months following a disaster to ask people how they’re doing compared to a list of outcomes. Each response to a disaster or conflict is evaluated separately and we use the results to help influence our future decisions and how we make improvements with our disaster responses.

claim that they are now sufficiently sheltered from

the elements after receiving shelter materials

EIN 20-0471604 | ShelterBox and Rotary are project partners in disaster relief. ShelterBox is a charity, independent of Rotary International and The Rotary Foundation.

THANK YOU FOR YOUR SUPPORT IN 2018 Your support has made it possible to help the families you’ve just read about— and thousands more. Thank you. 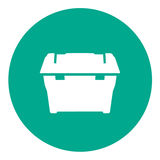