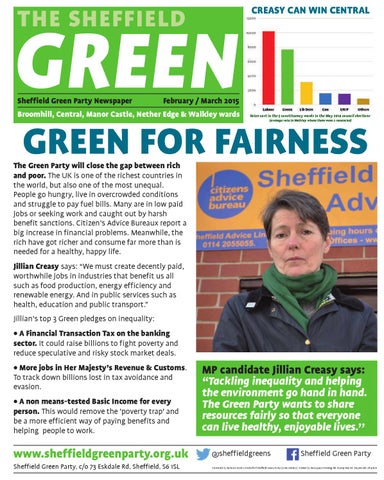 The Green Party will close the gap between rich and poor. The UK is one of the richest countries in

the world, but also one of the most unequal. People go hungry, live in overcrowded conditions and struggle to pay fuel bills. Many are in low paid jobs or seeking work and caught out by harsh benefit sanctions. Citizen’s Advice Bureaux report a big increase in financial problems. Meanwhile, the rich have got richer and consume far more than is needed for a healthy, happy life.

Jillian Creasy says: “We must create decently paid, worthwhile jobs in industries that benefit us all such as food production, energy efficiency and renewable energy. And in public services such as health, education and public transport.” Jillian’s top 3 Green pledges on inequality:

• A Financial Transaction Tax on the banking sector. It could raise billions to fight poverty and reduce speculative and risky stock market deals.

• More jobs in Her Majesty’s Revenue &amp; Customs. To track down billions lost in tax avoidance and evasion.

• A non means-tested Basic Income for every person. This would remove the &#39;poverty trap&#39; and be a more efficient way of paying benefits and helping people to work.

“Tackling inequality and helping the environment go hand in hand. The Green Party wants to share resources fairly so that everyone can live healthy, enjoyable lives.” @sheffieldgreens

In the 2010 General Election, independent website Vote for Policies asked people to choose their preferred policies without saying which party manifesto they were from. Green Party policies were by far the most popular among the nearly 500,000 people who took the test. We are confident that our manifesto offers what this country needs - a positive alternative to all the other parties. Vote for Policies will soon go live for this election – take the test yourself at

Anne lives on the ward border in Nether Edge. She taught at King Ecgbert School for 27 years and now volunteers at Save The Children and Kids Around The World charity shops. She’s a member of Abbeydale Corridor Clean Air Group and helps out in Sharrow Green Spaces .

JOIN A TRADE UNION The Young Greens, our 30 and under group, played a key role in organising the Free Education demonstration in London last November. They continue to campaign for free higher education and the reversal of tuition fees debts. Their current campaign encourages trade union membership among young people.

Anne says “The New Retail Quarter (NRQ) remains stalled 7 years after Green Councillors first called for a ‘Plan B’. City centres are changing and we’ve campaigned hard for an alternative to big shopping centres. We want a mix of leisure and businesses, with better services for residents and more support for independent traders, whose profits stay in the local economy. I would be interested to hear your views on this issue.”

Aodan Marken works in Estates and Facilities Management at the University of Sheffield , and is the Chair of Sheffield Young Greens . Aodan says “Knowledge is power. The Green Party believes that an informed public is essential to proper governance. We have campaigned to open up the details behind long-term Council contracts with private companies. The big ones are Veolia (waste), Kier (buildings and repairs), Amey (street maintenance) and Capita (welfare benefits and IT). These contracts can only be changed if the companies agree so other council services are bearing the brunt of austerity cuts. Over 60% of the Council’s spending is now privatised. This takes money - including profits for the shareholders - out of Sheffield.”

Calvin lives in Nether Edge. He has experience as a support worker working with vulnerable people and is now a conductor on Supertram . He is a presenter of Communities Live on Sheffield Live radio.

Calvin Payne on Abbeydale Rd - most supermarket workers earn just above the minimum wage of £6.50 an hour

Calvin says “Average wages in Sheffield have dropped by a staggering 27% since 2008 after adjusting for inflation – the 3rd biggest drop in the country. Our manifesto calls for the minimum wage to be increased immediately to “Living Wage” levels and to £10 an hour by 2020. Greens will act to stop companies using zero hours contracts to exploit labour and cut costs.”

PERMIT PARKING PROBLEMS Greens support permit parking schemes because they discourage commuters and help residents. But you’ve told us how hard it is to renew or change permits and buy them for visitors. Cllr Jillian Creasy says “We’ve held a public meeting and are now pushing the Council for an improvement plan. It’s no wonder that people are upset that the Council is making £1.1 million annual profit from schemes, especially when they get such poor service from them”.

Graham has lived in the ward for 35 years. He’s a lecturer at Sheffield College and the press officer of Residents Against Station Closure, the campaign that’s kept public access through the train station. Graham says “Rail privatisation has meant high ticket prices, overcrowded trains and hundreds of millions of pounds lost to operator profits. I support Green MP Caroline Lucas&#39; call in parliament for public ownership of the rail network. The Green Party would spend £1.7 billion more on the railways including a 10% cut to all fares.”

Sue has lived in Walkley ward since 1978. She was a founder member and Chair of Walkley Community Forum and a Governor at Walkley Primary School for 12 years. Sue volunteers at Walkley library, ASSIST, and the Northern Refugee Centre.

Sue says “I’m right behind our proposal to bring 6000 new green jobs to the Sheffield City Region by 2022 – a £300 million boost to the economy. Investing in energy efficiency could reduce UK demand by 40%, saving on bills, cutting air pollution and helping fight climate change. Better insulation would also mean warmer homes, especially in older housing stock like the many terraces in Walkley.“

AIR QUALITY AND TRANSPORT Air pollution causes 500 premature deaths a year in Sheffield, mainly due to private cars. Cllr Brian Webster got this back on the Council’s agenda, proposing a decisive approach to improve health and save lives. Labour watered down the proposal. In January South Yorkshire&#39;s Council Leaders voted through excessive 10% cuts to the local public transport budget. This means the closure of travel centres and no more paper bus timetables. These cuts hit the most vulnerable hardest.

Dr Jillian Creasy has been appointed as the Green Party’s Health spokesperson. You may have heard her on Radio 4’s Any Questions or the Channel 5 debate on the NHS.

Jillian says: “My campaign is really taking off as we surge forward in both opinion polls and membership. The public overwhelmingly said yes to including Greens in the TV debates.” “The privatisation of public services by Labour and coalition governments is an expensive and damaging failure. The Green Party offers a positive alternative to the “business as usual” approach to politics. Sheffield Central is clearly between Labour and the Greens. I’m working hard to win your support.”

CAN YOU VOTE ON MAY 7TH? To vote in the general election you must be 18 years old on polling day and be a British or Irish citizen or a qualifying Commonwealth citizen. The deadline to register to vote is midnight on April 20th and the system is now Individual Voter Registration . To register and find information go to

“With this government making an unprecedented attack on the country&#39;s most vulnerable people, we need Green voices in Parliament more than ever.” Green MP Caroline Lucas

Please use the contact points on the right for Manor Castle, Nether Edge &amp; Walkley enquiries

HOW CAN YOU HELP? • Register to vote via www.gov.uk/register-to-vote • Display a window poster at election time • Deliver leaflets in your area • Make a donation or join the Green Party. Go to: e-mail: Telephone: Young Greens: Write to:

The newspaper of Sheffield Green Party