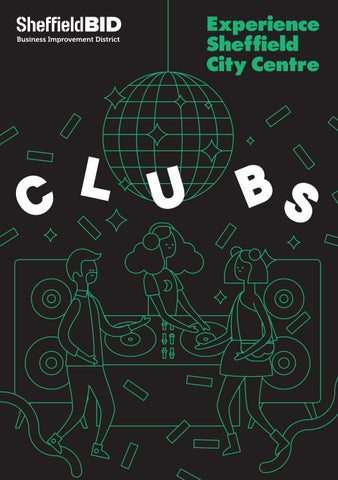 When the sun goes down, the lights go up in Sheffieldâ&amp;#x20AC;&amp;#x2122;s nightclubs and late night party venues.

Home to everything from a legendary rock club to an iconic indie venue, chilled-out R&amp;B spots to proudly cheesy dance floors â&amp;#x20AC;&amp;#x201C; the city centre is a destination for music lovers of any and all persuasions.

Clubbing doesn’t get much bigger than this. Area goes all out on Saturdays, filling four rooms and nine bars with the best in house, R&amp;B, hip-hop and grime, alongside visual feasts in the form of aerialist, fire breathing and contortionist performances. The venue also keeps alive the infamous Gatecrasher nights that in the 90s and 00s brought revellers flocking from miles around to the city’s no-longer-standing Gatecrasher One club. Don’t miss its super-high-production spectaculars for events like Halloween either.

The home of rock and alternative music in Sheffield since 1997. Corp, as it’s affectionately known, spans three floors and was named by Kerrang! magazine as one of the country’s top three rock clubs. Wednesday’s pop and indie Skool Disco is a student staple, offering discounts to anyone in a school shirt and tie. On Fridays the main room leans towards emo and pop-punk. And on Saturdays, Corp is possibly the only place in the city where you get moving to Rammstein, the Prodigy and Blondie in the same night.

An icon of independent music in Sheffield, the Leadmill has been at the centre of the city’s music scene for three decades. The 80s brought everything from post punk to Culture Club to the venue. In the 90s it was Britpoppers Oasis, The Verve, Elastica and Suede, and the grungier likes of Babes in Toyland and Mudhoney. And in the 00s came the turn of the Strokes, White Stripes, Yeah Yeah Yeahs, and – of course – Arctic Monkeys. It still hosts live music, a comedy gig or a club night most nights of the week.

One of many examples of a former cutlery works finding a new lease of life in Sheffield, Crystal is a cool and intimate space, all exposed brickwork, parquet floors and cosy booths. The nightclub is popular with students on weeknights, and on Saturdays it gets people moving to house, R&amp;B and soul.

Occupying what was once one of Sheffield’s historical Methodist churches, this stylish late bar has it all: comfy armchairs, a dance floor, cracking drinks deals, and even cocktail masterclasses. Local resident DJs provide the perfect soundtrack to wind down and put on your dancing shoes, with weekends tending to lean towards house, disco, soul and R&amp;B.

One for the indie kids. Plug is home to live events with the sorts of artists who come recommended by the NME. The venue also hosts huge club nights – many are aimed at students, sometimes following themes which in the past have ranged from Beyoncé to Harry Potter.

Proudly calling itself the ‘home of the classic oldie’, Maggie May’s is the place to enjoy soul music in Sheffield city centre. Saturday is dedicated to northern soul, with guest DJs taking to the decks from 3pm onwards. At all other times, expect to bow down and get moving to some of the greatest musical icons from the 60s through to the 00s.

The Viper Rooms Priding itself on bringing a bit of glam to your nights out, the Viper Rooms has an extensive cocktail and champagne list, confetti cannons, and VIP booths. Its calendar boasts something for every night of the week. From Monday to Thursday it focuses on student crowds, Fridays are all about R&amp;B and pop anthems, Saturdays get more eclectic, while the week rounds off with a Sunday session of 90s R&amp;B and hip-hop through to 3am. 35 Carver Street, S1 4FS sheffield.theviperrooms.com

Dtour Music Bar and Lounge R&amp;B and house music are the specialities at Dtour, and it delivers them in style. You’ll also regularly hear dancehall, soul, garage, bassline and Afrobeats at special events here. The elegant bar and club is one for a slightly more mature crowd, with an over-25s policy at weekends. If you’re looking for an extra level of exclusivity, book out one of the private rooms and settle down for a night with the karaoke machine or PlayStation. 192 Shoreham Street, S1 4SQ facebook.com/dtourlounge

O2 Academy Sheffield The modernist building that now houses the Academy has a long legacy in Sheffield’s music scene, having entertained previous generations as the Top Rank Suite and Roxy Disco. Gigs in its big auditorium range from rock to reggae to rap, while club nights regularly keep crowds lively through to the early hours. 37—43 Arundel Gate, S1 2PN academymusicgroup.com/ o2academysheffield

Popworld Cheesy and proud. The music collection at Popworld is heavy on the 90s nostalgia — expect to get your dancing shoes on to the likes of Five, Atomic Kitten and S Club. Join in the karaoke every Saturday before 10pm, grab a ‘partini’ cocktail to share amongst friends, and keep the good times going through to the early hours. Popworld is conveniently situated in the thick of the Devonshire Quarter, a students’ paradise that’s home to bar after bar. 2—8 Carver Street, S1 4FS popworldparty.co.uk/sheffield

Code Nightclub This place knows how to party. The target audience at Code is very much students, with a 90p Party on Tuesdays (yes, that’s 90p entry and 90p drinks, all night), the longstanding Jump Around night on Thursdays complete with inflatables, face painting and confetti cannons, and Student Saturdays enticing massive crowds with their wide range of music and £2 drinks offers. All of this has helped it win the Exposed Awards vote for Sheffield’s best nightclub each year since 2016. 28 Eyre Street, S1 4QY codesheffield.com

This guide will help you discover some of the places that really know how to get the city centre moving. The many and varied spots that have become beacons for dancers, revellers, headbangers and night owls. The venues that keep things lively through to the early hours, with something for every night of the week.