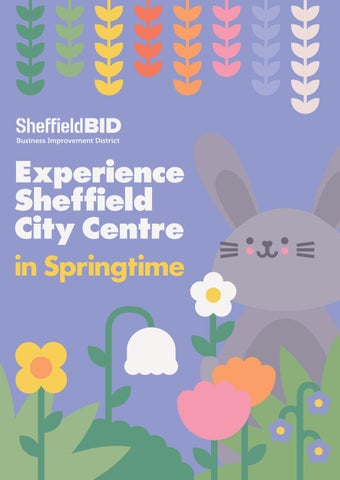 Spring is just around the corner, and Sheffield is well and truly bursting into life.

It’s a season all about exciting new sights, sounds and tastes, and nowhere is that more apparent than in the city’s galleries, theatres, shops and restaurants this March and April. Its also a time to take cues from the weather and show that extra bit of warmth to your family, whether on Mother’s Day or Easter weekend.

… chocolate Think Easter, think chocolate. Thorntons has been crafting Easter eggs since 1922, and their Fargate branch will sort you out for personalised eggs, chocolate bunnies and hampers. Just down the road, Hotel Chocolat is home to some outrageously indulgent eggs, including options for extra thick chocolate shells that house lots of little eggs within.

Go all out for Easter on 21st April, with all manner of treats for all the family. … toys Follow these tips for the Keen to dodge the sugar high? Go for a chocolatefree Easter gift. John Lewis has a fantastic range of best places to shop for… cuddly lambs, Peter Rabbit toys and crafts. On The

Moor, The Entertainer has everything from toy eggs that are ideal for creating your own hunt, to a LEGO Minecraft chicken coop, while The Works stocks plenty of seasonally-themed activity books.

… tea By chance, Easter falls on the same day as National Tea Day this year. The folk at Birdhouse Tea Bar and Kitchen are celebrating the two, and for Easter they’ll be selling a special edition Mini Chocolate Eggs tea, with vanilla and cocoa flavours. We’ll pop the kettle on. Brearley Bear will also return to the city centre this Easter, for a choc-tastic mini-Easter trail for little eggsplorers. Pick up a trail map at Unit 1, Surrey Street from 18th to 22nd April.

Mother’s Day Maybe a slap-up dinner is Film and fizz Give your mum the time of her life with Dirty Dancing called for. Perhaps you’ll at the Light. The cinema’s Mother’s Day bundle go with the fail-safe gift of includes two tickets to the film, a small bottle of prosecco and a bag of sweets or chocolate for £20. flowers or a good book. However you choose to honour your mum on Afternoon tea 31st March, Sheffield’s high street, its independent shops and its restaurants are lined with treats. Find some pointers below.

Gifts Pick the perfect message for your mum at the high street’s WH Smith and Paperchase, or indie card and gift shops Bird’s Yard, All Good Stuff, and Cards and Gifts. Give the gift of a good book from Waterstones, smelly stuff from Lush or The Perfume Shop, or flowers from Marks and Spencer, Lockwoods or Plantology. For outdoorsy mums, choose some kit from Blacks on The Moor. If your mum’s into beautiful homeware, try Natural Bed Company and Within Reason. Or let your mum pick out her own special something with the Sheffield Gift Card – available at Unit 1 Surrey Street or online (sheffieldgiftcard.co.uk).

Fancy food Take your mum somewhere special for her big day. On Sheffield Uni’s campus, Inox Dine is offering a delicious three-course afternoon meal and fizz for £22.95. Yorkshire restaurant Silversmiths is serving up a three-course set menu for £25, including flowers for mums. Or toss a coin between comfort food faves: pizza or pie? The Forum’s throwing a Mother’s Day Pizza Party, 12—5pm, where it’s £14 for a 16” createyour-own pizza and a glass of prosecco for mum. At Pieminister, meanwhile, the £20 bottomless brunch will get you a pie plus your fill of prosecco or cocktails.

Book a table at Birdhouse Tea Bar and Kitchen from 29th to 31st March for their Mother’s Day afternoon tea with a floral twist, including a glass of elderflower fizz for £20. They’re also launching a Mother’s Day special edition tea blend. Opt for Leopold Hotel and enjoy afternoon tea in historic surroundings, with sandwiches, scones and all the trimmings for £16.50, and the added option of some fizz. Forest-themed coffee and gift shop Wildwood, meanwhile, are serving up a French toast brunch with clotted cream and strawberries plus strawberry cream teas.

Fill your longer days with festivals, films, art, music, theatre and food this March and April, at these unmissable events from the city centre’s calendar.

It’s a big moment for Site. The gallery recently reopened following expansion work, has a new artistic director, and is celebrating its 40th year of bringing contemporary art to the people of Sheffield. Re-collections features video pieces by three women who Site has given a platform to in the past, exploring ideas of history and remembering.

Leonardo Da Vinci: A Life in Drawing A very rare and really quite astounding opportunity to see twelve of the Renaissance master’s finest drawings up close. This exhibition forms part of a nationwide event marking 500 years since the artist’s death. Millennium Gallery 48 Arundel Gate, S1 2PP Until 5th May museums-sheffield.org.uk

Classical Weekend Performers from Sheffield and around the world will dot the city for this exciting festival — bringing all kinds of classical music to everywhere from the City Hall and Cathedral to more intimate venues like DINA, Channing Hall and even the Graves Gallery. Various venues 8th—10th March classicalsheffield.org.uk

Unity in Diversity Theatre Deli is giving a platform to voices that aren’t heard often enough and representing a wider range of the community than ever before with Unity in Diversity, its spring/summer 2019 season. Led by two guest curators, actor/director John RwothOmack and performance artist Louise Orwin, the season includes everything from a feminist superhero musical (Vulvarine) to a show about a British identity crisis (Here’s Looking at UKIP?) to a performance exploring barriers (Over the Margins). Theatre Deli 202 Eyre Street, S1 4QZ Ongoing theatredeli.co.uk

Seven days in beer heaven. This citywide festival pays tribute to Sheffield’s history of brewing and its love of a good pint with meet-the-brewer showcases, a ‘beertography’ trail, pub and heritage walks, beer and food pairings, a live brew day, and parties.

Dine Sheffield Eat out at some of Sheffield’s favourite bars, cafes and restaurants with special £5/£10/£15 deals during Dine Sheffield. Everywhere from national chains to much loved independents will be cooking up tantalising offers for the fortnight – download your vouchers online. Various venues 14th—28th March dinesheffield.co.uk

Standing at the Sky’s Edge One of the most anticipated theatre events of the year, this epic new musical tells stories from Sheffield’s Park Hill – the iconic 1960s-built housing estate famous for its ‘streets in the sky’ – using new and classic songs by Richard Hawley. Crucible 55 Norfolk Street, S1 1DA 15th March—6th April £15—£45 sheffieldtheatres.co.uk

NT Live: All About Eve

Browse the wares of some of Sheffield’s ever-growing community of talented makers at this one-day market. Expect everything from original artworks to jewellery to gifts and more.

Gillian Anderson (best known for her role as Dana Scully in The X-Files) and Lily James (of Mamma Mia! Here We Go Again fame) head the bill in this stage version of the Hollywood classic about ambition, youth and celebrity. Thanks to the National Theatre Live, you can watch All About Eve unfold in real time at your choice of cinema, as it’s broadcast from the West End to Sheffield.

Dig out your gold lamé suit and prepare for Sheffield’s own ABC to give you ‘The Look of Love’ as they bring The Lexicon of Love to the magnificent City Hall stage, 37 years after the album hit the number-one spot. They’ll be performing the album in its entirety with the Southbank Sinfonia conducted by Anne Dudley, as well as other hits from their career.

The Betfred World Snooker Championship is once again set to take over the city centre as the snooker greats battle it out in the Crucible for the title of World Champion. Join in the excitement in and around Tudor Square.

Encounters with Ruskin The ideas of 19th-century thinker John Ruskin have had a lasting impact on the worlds of art, natural science and politics – and on Sheffield. In 1871 he founded educational arts charity the Guild of St George in the city, and now the Guild and the Library are helping mark the bicentenary of his birth with a series of events, featuring live performance, talks and more. Sheffield Central Library Surrey Street, S1 1XZ 4th April—29th June sheffield.gov.uk/home/libraries-archives

Festival of Debate Each spring, the team behind Now Then magazine put together a fascinating lineup of speakers from the worlds of politics, pop culture, journalism and literature. Their talks, workshops and events take on some of the pressing issues that the world faces today and introduce new ideas in interesting and accessible ways. Various venues 19th April—1st June festivalofdebate.com

Visit Visit Sheffield BID’s Springtime pop-up next-door to the Winter Garden on Surrey Street to discover more offers from Sheffield’s restaurants, bars and cafes, and to get inspiration for Mother’s Day and Easter gifts from city centre retailers. Sheffield BID Pop-up Unit 1, Surrey Street (next to the Winter Garden) Monday to Saturday: 10am — 6pm / 7pm Thursday Sunday: 11am — 4pm

Spring is just around the corner, and Sheffield is well and truly bursting into life.