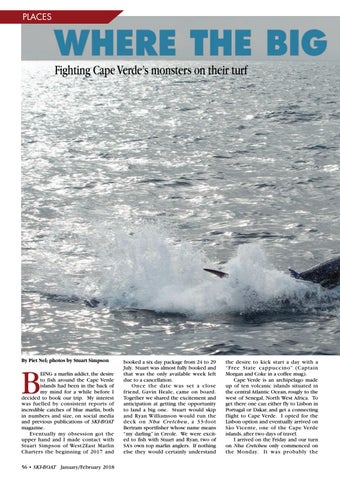 EING a marlin addict, the desire to fish around the Cape Verde islands had been in the back of my mind for a while before I decided to book our trip. My interest was fuelled by consistent reports of incredible catches of blue marlin, both in numbers and size, on social media and previous publications of SKI-BOAT magazine. Eventually my obsession got the upper hand and I made contact with Stuart Simpson of West2East Marlin Charters the beginning of 2017 and 56 • SKI-BOAT January/February 2018

booked a six day package from 24 to 29 July. Stuart was almost fully booked and that was the only available week left due to a cancellation. Once the date was set a close friend, Gavin Heale, came on board. Together we shared the excitement and anticipation at getting the opportunity to land a big one. Stuart would skip and Ryan Williamson would run the deck on Nha Cretcheu, a 33-foot Bertram sportfisher whose name means “my darling” in Creole. We were excited to fish with Stuart and Ryan, two of SA’s own top marlin anglers. If nothing else they would certainly understand

the desire to kick start a day with a “Free State cappuccino” (Captain Morgan and Coke in a coffee mug). Cape Verde is an archipelago made up of ten volcanic islands situated in the central Atlantic Ocean, rougly to the west of Senegal, North West Africa. To get there one can either fly to Lisbon in Portugal or Dakar, and get a connecting flight to Cape Verde. I opted for the Lisbon option and eventually arrived on São Vicente, one of the Cape Verde islands, after two days of travel. I arrived on the Friday and our turn on Nha Cretcheu only commenced on the Monday. It was probably the

Since 1984 Ski-Boat magazine has been providing deep sea anglers in South Africa and abroad with top quality content. Articles cover all asp...

Since 1984 Ski-Boat magazine has been providing deep sea anglers in South Africa and abroad with top quality content. Articles cover all asp...