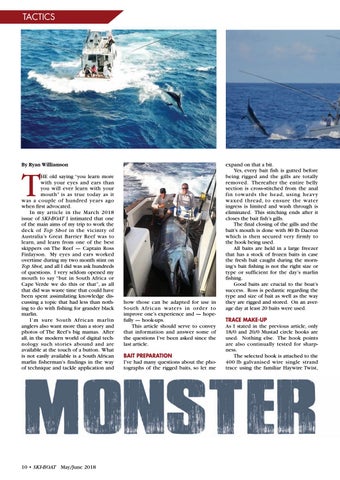 HE old saying “you learn more with your eyes and ears than you will ever learn with your mouth” is as true today as it was a couple of hundred years ago when first advocated. In my article in the March 2018 issue of SKI-BOAT I intimated that one of the main aims of my trip to work the deck of Top Shot in the vicinity of Australia’s Great Barrier Reef was to learn, and learn from one of the best skippers on The Reef — Captain Ross Finlayson. My eyes and ears worked overtime during my two month stint on Top Shot, and all I did was ask hundreds of questions. I very seldom opened my mouth to say “but in South Africa or Cape Verde we do this or that”, as all that did was waste time that could have been spent assimilating knowledge discussing a topic that had less than nothing to do with fishing for grander black marlin. I’m sure South African marlin anglers also want more than a story and photos of The Reef’s big mamas. After all, in the modern world of digital technology such stories abound and are available at the touch of a button. What is not easily available is a South African marlin fisherman’s findings in the way of technique and tackle application and

how those can be adapted for use in South African waters in order to improve one’s experience and — hopefully — hook-ups. This article should serve to convey that information and answer some of the questions I’ve been asked since the last article. BAIT PREPARATION I’ve had many questions about the photographs of the rigged baits, so let me

expand on that a bit. Yes, every bait fish is gutted before being rigged and the gills are totally removed. Thereafter the entire belly section is cross-stitched from the anal fin towards the head, using heavy waxed thread, to ensure the water ingress is limited and wash through is eliminated. This stitching ends after it closes the bait fish’s gills. The final closing of the gills and the bait’s mouth is done with 80 lb Dacron which is then secured very firmly to the hook being used. All baits are held in a large freezer that has a stock of frozen baits in case the fresh bait caught during the morning’s bait fishing is not the right size or type or sufficient for the day’s marlin fishing. Good baits are crucial to the boat’s success. Ross is pedantic regarding the type and size of bait as well as the way they are rigged and stored. On an average day at least 20 baits were used. TRACE MAKE-UP As I stated in the previous article, only 18/0 and 20/0 Mustad circle hooks are used. Nothing else. The hook points are also continually tested for sharpness. The selected hook is attached to the 400 lb galvanised wire single strand trace using the familiar Haywire Twist,