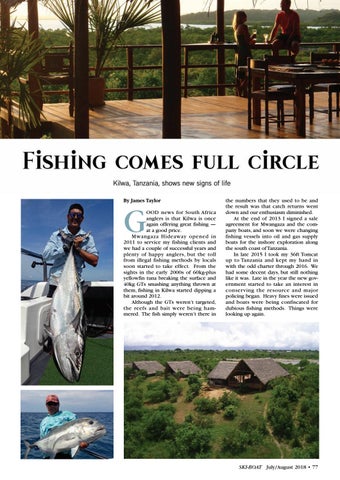 OOD news for South Africa anglers is that Kilwa is once again offering great fishing — at a good price. Mwangaza Hideaway opened in 2011 to service my fishing clients and we had a couple of successful years and plenty of happy anglers, but the toll from illegal fishing methods by locals soon started to take effect. From the sights in the early 2000s of 60kg-plus yellowfin tuna breaking the surface and 40kg GTs smashing anything thrown at them, fishing in Kilwa started dipping a bit around 2012. Although the GTs weren’t targeted, the reefs and bait were being hammered. The fish simply weren’t there in

the numbers that they used to be and the result was that catch returns went down and our enthusiasm diminished. At the end of 2013 I signed a sale agreement for Mwangaza and the company boats, and soon we were changing fishing vessels into oil and gas supply boats for the inshore exploration along the south coast of Tanzania. In late 2015 I took my 36ft Tomcat up to Tanzania and kept my hand in with the odd charter through 2016. We had some decent days, but still nothing like it was. Late in the year the new government started to take an interest in conserving the resource and major policing began. Heavy fines were issued and boats were being confiscated for dubious fishing methods. Things were looking up again.