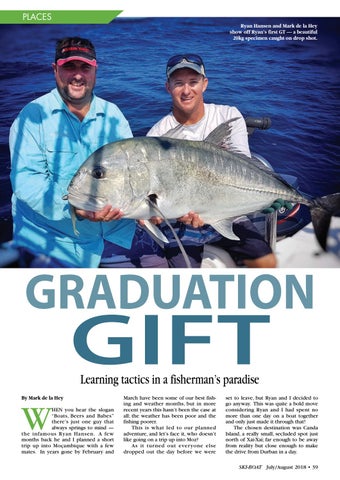 HEN you hear the slogan “Boats, Beers and Babes” there’s just one guy that always springs to mind — the infamous Ryan Hansen. A few months back he and I planned a short trip up into Moçambique with a few mates. In years gone by February and

March have been some of our best fishing and weather months, but in more recent years this hasn’t been the case at all; the weather has been poor and the fishing poorer. This is what led to our planned adventure, and let’s face it, who doesn’t like going on a trip up into Moz? As it turned out ever yone else dropped out the day before we were

set to leave, but Ryan and I decided to go anyway. This was quite a bold move considering Ryan and I had spent no more than one day on a boat together and only just made it through that! The chosen destination was Canda Island, a really small, secluded spot just north of Xai-Xai; far enough to be away from reality but close enough to make the drive from Durban in a day. SKI-BOAT July/August 2018 • 39