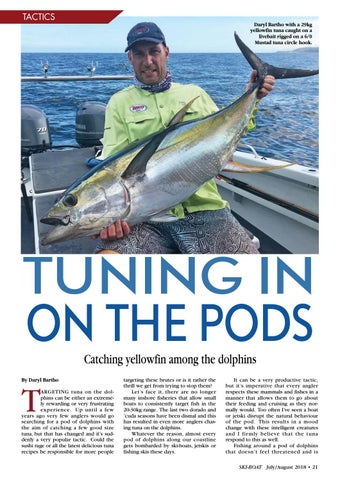 TACTICS Daryl Bartho with a 29kg yellowfin tuna caught on a livebait rigged on a 6/0 Mustad tuna circle hook.

ARGETING tuna on the dolphins can be either an extremely rewarding or very frustrating experience. Up until a few years ago very few anglers would go searching for a pod of dolphins with the aim of catching a few good size tuna, but that has changed and it’s suddenly a very popular tactic. Could the sushi rage or all the latest delicious tuna recipes be responsible for more people

targeting these brutes or is it rather the thrill we get from trying to stop them? Let’s face it, there are no longer many inshore fisheries that allow small boats to consistently target fish in the 20-30kg range. The last two dorado and ’cuda seasons have been dismal and this has resulted in even more anglers chasing tuna on the dolphins. Whatever the reason, almost every pod of dolphins along our coastline gets bombarded by ski-boats, jetskis or fishing skis these days.

It can be a very productive tactic, but it’s imperative that every angler respects these mammals and fishes in a manner that allows them to go about their feeding and cruising as they normally would. Too often I’ve seen a boat or jetski disrupt the natural behaviour of the pod. This results in a mood change with these intelligent creatures and I firmly believe that the tuna respond to this as well. Fishing around a pod of dolphins that doesn’t feel threatened and is SKI-BOAT July/August 2018 • 21