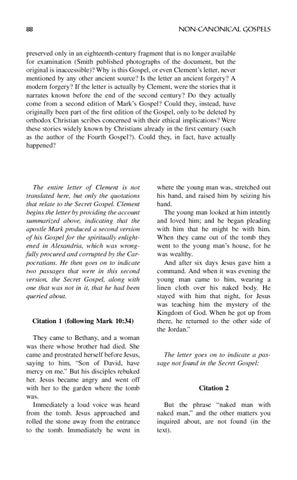 preserved only in an eighteenth-century fragment that is no longer available for examination (Smith published photographs of the document, but the original is inaccessible)? Why is this Gospel, or even Clement’s letter, never mentioned by any other ancient source? Is the letter an ancient forgery? A modern forgery? If the letter is actually by Clement, were the stories that it narrates known before the end of the second century? Do they actually come from a second edition of Mark’s Gospel? Could they, instead, have originally been part of the ﬁrst edition of the Gospel, only to be deleted by orthodox Christian scribes concerned with their ethical implications? Were these stories widely known by Christians already in the ﬁrst century (such as the author of the Fourth Gospel?). Could they, in fact, have actually happened?

The entire letter of Clement is not translated here, but only the quotations that relate to the Secret Gospel. Clement begins the letter by providing the account summarized above, indicating that the apostle Mark produced a second version of his Gospel for the spiritually enlightened in Alexandria, which was wrongfully procured and corrupted by the Carpocratians. He then goes on to indicate two passages that were in this second version, the Secret Gospel, along with one that was not in it, that he had been queried about.

Citation 1 (following Mark 10:34) They came to Bethany, and a woman was there whose brother had died. She came and prostrated herself before Jesus, saying to him, “Son of David, have mercy on me.” But his disciples rebuked her. Jesus became angry and went off with her to the garden where the tomb was. Immediately a loud voice was heard from the tomb. Jesus approached and rolled the stone away from the entrance to the tomb. Immediately he went in

where the young man was, stretched out his hand, and raised him by seizing his hand. The young man looked at him intently and loved him; and he began pleading with him that he might be with him. When they came out of the tomb they went to the young man’s house, for he was wealthy. And after six days Jesus gave him a command. And when it was evening the young man came to him, wearing a linen cloth over his naked body. He stayed with him that night, for Jesus was teaching him the mystery of the Kingdom of God. When he got up from there, he returned to the other side of the Jordan.”

The letter goes on to indicate a passage not found in the Secret Gospel:

Citation 2 But the phrase “naked man with naked man,” and the other matters you inquired about, are not found (in the text).