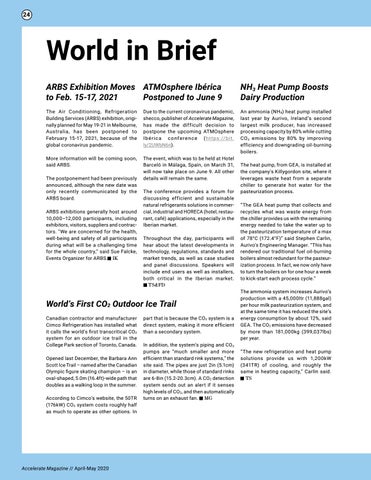 The Air Conditioning, Refrigeration Building Services (ARBS) exhibition, originally planned for May 19-21 in Melbourne, Australia, has been postponed to February 15-17, 2021, because of the global coronavirus pandemic.

Due to the current coronavirus pandemic, shecco, publisher of Accelerate Magazine, has made the difficult decision to postpone the upcoming ATMOsphere I b é r i c a c o nfe r e n c e ( ht tps://bit. ly/2UWbN6n).

The event, which was to be held at Hotel Barceló in Málaga, Spain, on March 31, will now take place on June 9. All other details will remain the same.

The postponement had been previously announced, although the new date was only recently communicated by the ARBS board. ARBS exhibitions generally host around 10,000–12,000 participants, including exhibitors, visitors, suppliers and contractors. &quot;We are concerned for the health, well-being and safety of all participants during what will be a challenging time for the whole country,” said Sue Falcke, Events Organizer for ARBS. IK

The conference provides a forum for discussing efficient and sustainable natural refrigerants solutions in commercial, industrial and HORECA (hotel, restaurant, café) applications, especially in the Iberian market. Throughout the day, participants will hear about the latest developments in technology, regulations, standards and market trends, as well as case studies and panel discussions. Speakers will include end users as well as installers, both critical in the Iberian market. TS&amp;FD

World’s First CO2 Outdoor Ice Trail Canadian contractor and manufacturer Cimco Refrigeration has installed what it calls the world’s first transcritical CO 2 system for an outdoor ice trail in the College Park section of Toronto, Canada. Opened last December, the Barbara Ann Scott Ice Trail – named after the Canadian Olympic figure skating champion – is an oval-shaped, 5.0m (16.4ft)-wide path that doubles as a walking loop in the summer. According to Cimco’s website, the 50TR (176kW) CO 2 system costs roughly half as much to operate as other options. In

part that is because the CO 2 system is a direct system, making it more efficient than a secondary system. In addition, the system’s piping and CO 2 pumps are “much smaller and more efficient than standard rink systems,” the site said. The pipes are just 2in (5.1cm) in diameter, while those of standard rinks are 6-8in (15.2-20.3cm). A CO 2 detection system sends out an alert if it senses high levels of CO 2 , and then automatically turns on an exhaust fan. MG

The heat pump, from GEA, is installed at the company’s Killygordon site, where it leverages waste heat from a separate chiller to generate hot water for the pasteurization process. “The GEA heat pump that collects and recycles what was waste energy from the chiller provides us with the remaining energy needed to take the water up to the pasteurization temperature of a max of 78°C (172.4°F)” said Stephen Carlin, Aurivo’s Engineering Manager. “This has rendered our traditional fuel oil-burning boilers almost redundant for the pasteurization process. In fact, we now only have to turn the boilers on for one hour a week to kick-start each process cycle.” The ammonia system increases Aurivo’s production with a 45,000ltr (11,888gal) per hour milk pasteurization system, and at the same time it has reduced the site’s energy consumption by about 12%, said GEA. The CO 2 emissions have decreased by more than 181,000kg (399,037lbs) per year. “The new refrigeration and heat pump solutions provide us with 1,200kW (341TR) of cooling, and roughly the same in heating capacity,” Carlin said. TS

The April-May 2020 issue of Accelerate Magazine covers the latest research from Project Drawdown, which says that refrigerant management and alternative refrigerants are projected to reduce more than 100Gt of CO2e emissions by 2050 – almost twice what all nations generated in 2018. Also in the April-May 2020 issue are regional articles on: a North America study of ammonia accidents; a pioneering ammonia heat pump that taps heat from the London underground; a produce warehouse in Australia using a low-charge ammonia package; and a Tokyo department store that installed a CO2 water-loop system. Global trend articles include: meeting the COVID-19 challenge; shecco’s new “World Guide to Transcritical CO2”; a cooling-as a-service workshop; and the latest on magnetocaloric refrigeration.