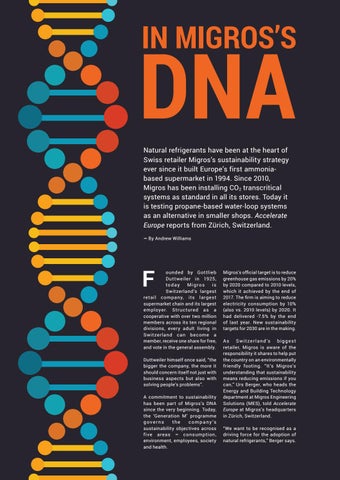 DNA Natural refrigerants have been at the heart of Swiss retailer Migros’s sustainability strategy ever since it built Europe’s first ammoniabased supermarket in 1994. Since 2010, Migros has been installing CO 2 transcritical systems as standard in all its stores. Today it is testing propane-based water-loop systems as an alternative in smaller shops. Accelerate Europe reports from Zürich, Switzerland. ― By Andrew Williams

ounded by Gottlieb Duttweiler in 1925, today Migros is Switzerland’s largest retail company, its largest supermarket chain and its largest employer. S truc tured as a cooperative with over two million members across its ten regional divisions, every adult living in Switzerland can become a member, receive one share for free, and vote in the general assembly. Duttweiler himself once said, “the bigger the company, the more it should concern itself not just with business aspects but also with solving people’s problems”. A commitment to sustainability has been part of Migros’s DNA since the very beginning. Today, the ‘Generation M’ programme governs the c o m pa ny ’s sustainability objectives across five areas – consumption , environment, employees, society and health.

Migros’s official target is to reduce greenhouse gas emissions by 20% by 2020 compared to 2010 levels, which it achieved by the end of 2017. The firm is aiming to reduce electricity consumption by 10% (also vs. 2010 levels) by 2020. It had delivered -7.5% by the end of last year. New sustainability targets for 2030 are in the making. A s S w i t z e r l a n d ’s b i g g e s t retailer, Migros is aware of the responsibility it shares to help put the country on an environmentally friendly footing. “It’s Migros’s understanding that sustainability means reducing emissions if you can,” Urs Berger, who heads the Energy and Building Technology department at Migros Engineering Solutions (MES), told Accelerate Europe at Migros’s headquarters in Zürich, Switzerland. “We want to be recognised as a driving force for the adoption of natural refrigerants,” Berger says.