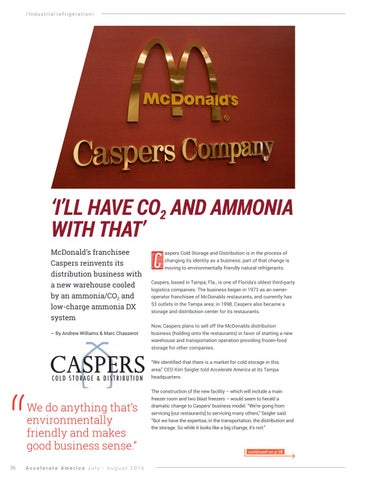 aspers Cold Storage and Distribution is in the process of changing its identity as a business; part of that change is moving to environmentally friendly natural refrigerants.

Caspers, based in Tampa, Fla., is one of Florida’s oldest third-party logistics companies. The business began in 1973 as an owneroperator franchisee of McDonalds restaurants, and currently has 53 outlets in the Tampa area; in 1998, Caspers also became a storage and distribution center for its restaurants. Now, Caspers plans to sell off the McDonalds distribution business (holding onto the restaurants) in favor of starting a new warehouse and transportation operation providing frozen-food storage for other companies. “We identified that there is a market for cold storage in this area,” CEO Kim Seigler told Accelerate America at its Tampa headquarters.

We do anything that’s environmentally friendly and makes good business sense.”

The construction of the new facility – which will include a main freezer room and two blast freezers – would seem to herald a dramatic change to Caspers’ business model. “We’re going from servicing [our restaurants] to servicing many others,” Seigler said. “But we have the expertise, in the transportation, the distribution and the storage. So while it looks like a big change, it’s not.”