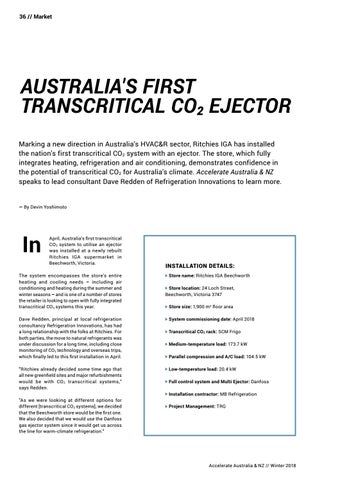 The system encompasses the store&#39;s entire heating and cooling needs – including air conditioning and heating during the summer and winter seasons – and is one of a number of stores the retailer is looking to open with fully integrated transcritical CO 2 systems this year.

Dave Redden, principal at local refrigeration consultancy Refrigeration Innovations, has had a long relationship with the folks at Ritchies. For both parties, the move to natural refrigerants was under discussion for a long time, including close monitoring of CO 2 technology and overseas trips, which finally led to this first installation in April.

&quot;Ritchies already decided some time ago that all new greenfield sites and major refurbishments would be with CO 2 transcritical systems,&quot; says Redden.

&quot;As we were looking at different options for different [transcritical CO 2 systems], we decided that the Beechworth store would be the first one. We also decided that we would use the Danfoss gas ejector system since it would get us across the line for warm-climate refrigeration.&quot;

A PIONEERING SPIRIT The history of natural refrigerants is often a story of individuals. Of scientists and engineers pushing the boundaries of what these refrigerants can achieve. Of legislators making a place for natural refrigerants in the future policy landscape. And of strong personalities in the end user community driving natural refrigerant adoption within their companies. Petar Lujic is one such personality. Lujic is the CEO of Kamen Group, a business involved in developing supermarkets and various other property types. This issue’s cover story focuses on the opening of the IGA Market Central store in western Sydney, which marked his entry into Australia’s independent retail sector. Extensive coverage from Sydney of the ARBS 2018 tradeshow and the ATMOsphere Australia conference are among the other highlights of this edition.