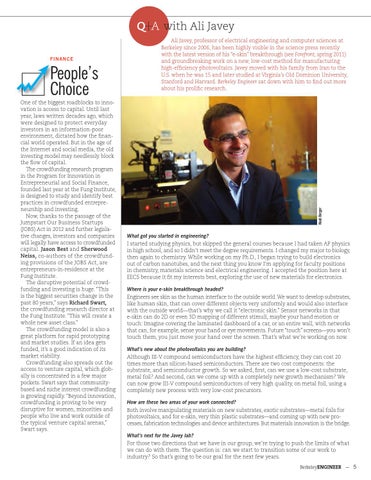 People’s Choice One of the biggest roadblocks to innovation is access to capital. Until last year, laws written decades ago, which were designed to protect everyday investors in an information-poor environment, dictated how the financial world operated. But in the age of the Internet and social media, the old investing model may needlessly block the flow of capital. The crowdfunding research program in the Program for Innovation in Entrepreneurial and Social Finance, founded last year at the Fung Institute, is designed to study and identify best practices in crowdfunded entrepreneurship and investing. Now, thanks to the passage of the Jumpstart Our Business Startups (JOBS) Act in 2012 and further legislative changes, investors and companies will legally have access to crowdfunded capital. Jason Best and Sherwood Neiss, co-authors of the crowdfunding provisions of the JOBS Act, are entrepreneurs-in-residence at the Fung Institute. The disruptive potential of crowdfunding and investing is huge. “This is the biggest securities change in the past 80 years,” says Richard Swart, the crowdfunding research director at the Fung Institute. “This will create a whole new asset class.” The crowdfunding model is also a great platform for rapid prototyping and market studies. If an idea gets funded, it’s a good indication of its market viability. Crowdfunding also spreads out the access to venture capital, which globally is concentrated in a few major pockets. Swart says that communitybased and niche interest crowdfunding is growing rapidly. “Beyond innovation, crowdfunding is proving to be very disruptive for women, minorities and people who live and work outside of the typical venture capital arenas,” Swart says.

Ali Javey, professor of electrical engineering and computer sciences at Berkeley since 2006, has been highly visible in the science press recently with the latest version of his “e-skin” breakthrough (see Forefront, spring 2011) and groundbreaking work on a new, low-cost method for manufacturing high-efficiency photovoltaics. Javey moved with his family from Iran to the U.S. when he was 15 and later studied at Virginia’s Old Dominion University, Stanford and Harvard. Berkeley Engineer sat down with him to find out more about his prolific research.

What got you started in engineering? I started studying physics, but skipped the general courses because I had taken AP physics in high school, and so I didn’t meet the degree requirements. I changed my major to biology, then again to chemistry. While working on my Ph.D., I began trying to build electronics out of carbon nanotubes, and the next thing you know I’m applying for faculty positions in chemistry, materials science and electrical engineering. I accepted the position here at EECS because it fit my interests best, exploring the use of new materials for electronics. Where is your e-skin breakthrough headed? Engineers see skin as the human interface to the outside world. We want to develop substrates, like human skin, that can cover different objects very uniformly and would also interface with the outside world—that’s why we call it “electronic skin.” Sensor networks in that e-skin can do 2D or even 3D mapping of different stimuli, maybe your hand motion or touch: Imagine covering the laminated dashboard of a car, or an entire wall, with networks that can, for example, sense your hand or eye movements. Future “touch” screens—you won’t touch them, you just move your hand over the screen. That’s what we’re working on now. What’s new about the photovoltaics you are building? Although III-V compound semiconductors have the highest efficiency, they can cost 20 times more than silicon-based semiconductors. There are two cost components: the substrate, and semiconductor growth. So we asked, first, can we use a low-cost substrate, metal foil? And second, can we come up with a completely new growth mechanism? We can now grow III-V compound semiconductors of very high quality, on metal foil, using a completely new process with very low-cost precursors. How are these two areas of your work connected? Both involve manipulating materials on new substrates, exotic substrates—metal foils for photovoltaics, and for e-skin, very thin plastic substrates—and coming up with new processes, fabrication technologies and device architectures. But materials innovation is the bridge. What’s next for the Javey lab? For those two directions that we have in our group, we’re trying to push the limits of what we can do with them. The question is: can we start to transition some of our work to industry? So that’s going to be our goal for the next few years. Berkeleyengineer The Fall 2013 issue of Berkeley Engineer gives a behind-the-scenes look at the construction of the new 49ers stadium, features a story about...

The Fall 2013 issue of Berkeley Engineer gives a behind-the-scenes look at the construction of the new 49ers stadium, features a story about...