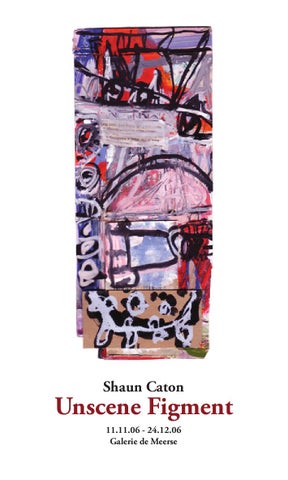 Foreword Travels in timeless hyper-reality... By Gavin Bennett ‘Holy scats need no gilding’ ( Fegooish Ennym, In Abscentio Abstracts, London 2006) ...not to ask to shine so near the altered state of the shrine yours mine no difference thro’ the cryptographs enmeshed in flesh smeared mirrors a laugh of joy glimmers shimmers reverberates resounds abounds in constant surprise... (fragment of a longer poem) The painter/poet, performer, photographer, writer, collector, and creative dynamo of the active imagination: Shaun Caton is an outstanding contemporary master yet an atavistic avatar of the timeless metaphysic of the supra aesthetic. Delicious, Delectable, deliriums divine, and define the totemics of the unknowable; each token of this process shows its status as it bursts bathos backwards and blows bubbles where wonder worlds... the dream between intensity of sense and immensity of meaning... authenticity shifts shapes from its disguises to inform the genuine like an ape of matter spirited away to entrance content in the mind/brush dance of one who truly knows... and our delight in seeing it so beautifully shown. Uniqueness has no way to face for space becomes timeless so hyper-reality abstracts graced with the disinterested, the subject of objects reappraised, it never fades or fails or ceases when all amazes. And those that really know are greatly distinguished so best to show it hereafter and before. Site is vision in others placeless consciousness...

Performance Into Painting: Total Body Art By Shaun Caton During the 1980’s and 90’s I worked extensively as a performance artist, making hundreds of live works across Europe and the USA. Performances created a living total experience for myself and spectators or unwitting participants. I would create an entire environment often from found objects, powder pigment and drawings/paintings of specific items. I was conscious of my use of intense colours in my performance works to accentuate a feeling or mood, to create a rite of passage from primordial fluids, materials and imagery. I think these evoke a corporeal humanity. The fusion of paint and performance for me is a shamanic practice. It’s about primitivism: inventing a dialogue between the body and its lived space. Human Soup 1990 Performance at Galerie Fisch, Braunschweig © 1990 C. O. Caspar

Oneâ&amp;#x20AC;&amp;#x2122;s whole life flows through an image in a moment and to achieve this act of spontaneity one must abandon notions of whether a picture will be good or bad. Such terminologies are stupid and barbaric notions. One must trust the instinctual urge. A powerful image is in a state of continual evolution. One starts from absolutely nothing and heads towards the possibility of something. The journey is disorientating because one does not know what one is seeking. Evolution is not just in the hand and eye of the artist. It is also in the perception of the viewer who imbues the image with a multitude of meanings. For example: liquid foliage, recovered memories, synasthesia. Paint is fleshy, tumescent, excremental, volcanic, crystalline and sonorous.

My paintings are about accumulation and loss: on the one hand they are tumultuous and densely packed and in another sense, lessening the load. The viewer brings much baggage to the picture before engaging and associating with it. We are quick to say that painting reminds us of such an artist or something...when really we should use our imagination and disregard the social expectation of ridiculous comparisons. Our accumulated wisdom and knowledge about painting is what we have been told to think by idiotic academics not what we really think. When looking into paintings one must lose this tendency to over explain and justify our ignorance and instead we should revert to a purely emotive response. What is painting at the end of the day? A lot of shit scraped across a flat surface that pretends to be something clever and special? Perhaps. Painting for me is a link with our primordial nature, a primitive compulsion to create a situation of unique beauty and strangeness. Ultimately, I am the stranger who grows stranger by the day when I look at my own paintings.

Painting: A Species of Fragility By Shaun Caton In infancy I scrawled black lines on the walls of the house with a lump of coal as an assertion of my being and gesture of my fecality. Most painters do this. The urge to make one’s own images is as powerful as breath itself. The unknown nebulae that exist in the mind and the rotund and spherical doodles of children propagate personages and conjoined floating bodies, form imprints on surfaces that by their nature are compelling, compulsive and addictive. The painter’s eyes devour the grime of the city, savouring every nuance of urban energy, and the silken stains on rain washed pavements. Painting is flux: friction and fiction, fracture and friction, defecation and dredging. It is both foible and fable. Paint is a skein of skin lifted, peered into and underneath, left to shrivel and blister, and is the vibrant slurry of chromatic dreamscapes. One carries one’s paintings in pockets filled with bits of food and fluff, in one’s head and in one’s thumping Purple Heart. Painting is a long time germinating and sprouting as tangible fodder for exploration. It comes from the stratum of life’s curious experiences, sandwiched somewhere between the indistinct instinct which is invented, or borrowed memory. What emerges is a guttural utterance, an event pitched in the hinterland of an inevitable synthetic choreography. One does not start a painting with a specific image in mind. This pullulates as time goes by. Manifesting itself as a sequence of preferences for certain forms, colours, and metamorphic compositional structures. A non objective painting is the amalgam of everything observed, scrutinised and unspoken. Painting is a grimoire, an incantation of spells, an exotic flowering of one’s driven energy. One can inhabit the sensual runnels and conduits that remind us of childhood’s muddy passageways where we once played with sticks and worms. And when boredom descended upon us we poked one another in the eyes for entertainment and the possibility of future enlightenment. Much painting today is mulch: manufactured by posturing pseudo-iconoclasts for a capitalist consumer market that is glutted on gimmick. People talk only of what it is worth in terms of coinage, sporting the coiffure of the stickleback and the footwear of the demi-god sports hero. Transcending the humdrum and occupying a plateau that eavesdrops on the infinite, the painter of today must demand an intelligent and poetic conversation with paintings around him. Unfortunately, much is pastiche and foppery. Empty platitudes designed for the visually retarded. One can learn hope from a study of children’s drawings, meditations on rock formations and the principles of Jungian synchronicity. Everything is connected ad infinitum - everything is collected ad nauseum. When one speaks about painting one is describing a species of fragility. 2006.

Some Notes About Painting [From 2006 Notebook.] By Shaun Caton I am a collector of signs, symbols, insignia. People ask me what my paintings are â&amp;#x20AC;&amp;#x153;aboutâ&amp;#x20AC;? and I point them at grids, car parking lots, bollards, lamp posts, post boxes, industrial environments, machines, ducting, tunnels, mould, mildew, organic decay, walkways, concourses, conduits, alleyways, highways, bold and brash advertising colours on billboards, brick walls, found objects, tables loaded with cluttered items, a sense of purpose without intentionality. I think of poems when I paint. Paintings are about nothing and everything. A good painter embraces infinity in work. A painter kisses the unknown with a kind of latent magic that emerges only when he starts working. Painting is a kind of performance, a dance, an un-mouthed verse, a poem without Words. Brush marks and shifting patterns of paint reveal a lexicon of calligraphic urgency. I am always drawn to painting metamorphic forms that expand, contract, burst and collide. One can liken these to organisms; wind blown seeds, the pregnant earth spitting forth its delicate beauties into the cerebral blue spaces between interrupted dreams, pebbles that glisten in the glare of the sun. A painting only works when there is definite tension and curious flowering attraction. This tension is taut and mesmerising, it intoxicates and compels the viewer to desire interaction with the picture. Dialogue between the eye and the brush manifests in the metadoodle, a crazy and self-evolving free style of drawing, sculpting and singing in the sticky substance that is paint. Painting is a psychic-automatic action guided by intuition, a sense of gesture that is evocative of personality, a language that mutates as it is spoken. There is an affinity with the art of children and those who have swallowed the primordial in creative energy and given birth to an original utterance. 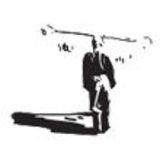