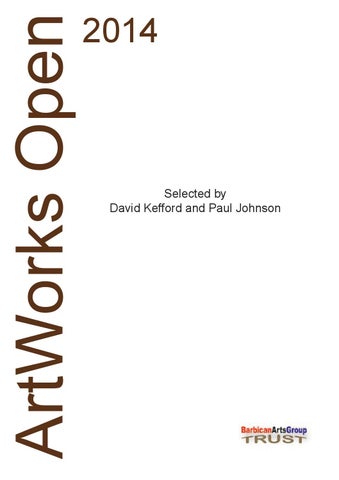 Amazingly ArtWorks Open is now in itâ&#x20AC;&#x2122;s 6th year. Ten selectors down the line we arrive at David Kefford and Paul Johnson. The show this year clearly demonstrates their skill in excavating works by artists with wide ranging practices and concerns. They have given their time freely to select and present the show. It has been an immense pleasure working with David and Paul and I greatly respect their diligence and integrity. Many thanks to all the artists who have submitted works to the show and many congratulations to those of whom were selected. A lot of work goes in to realizing the event each year and this year has been no exception. I would like to thank all those who have contributed to itâ&#x20AC;&#x2122;s success. Neil Irons, Lucile Montague, Jonet Harley-Peters, Sharon van Heck. Speacial thanks to Nadia Spita for keeping everything on track and presenting the prizes. Mark Wainwright Director

ArtWorks Open 2014 About the selectors

David Kefford is co-founder and director of artist run project space, Aid & Abet in Cambridge. He is also a member of Market Project, a collaborative initiative researching and sharing new methods or opportunities for artistic professional and economic development and a Trustee of Block 336 an artist run space in Brixton. He is currently a visiting lecturer at University of Hertfordshire and regularly lectures in other further and higher educational institutions and gives public talks in museum and gallery contexts. Paul Johnson

Paul Johnson received his MA from the Royal Academy Schools. His images of people and disused spaces are collages made from tiny pieces of paper, coloured by hand and fitted together in intricate patterns. In older work, such as in 2003â&#x20AC;&#x2122;s The Glass Family at One In The Other Gallery in London, Johnson has been known to cover his collages with semi-transparent laminate surfaces, obscuring the image. In addition to his studio practice, Paul Johnson has curated exhibitions. Most recently he was invited to curate by the Usher Gallery, Lincoln to curate the fascinating exhibition â&#x20AC;&#x2DC;There's something about you I am unsure about' .

When I was handed over the 'baton' from Reece Jones after his two year stint as the selector for Barbican Arts Trust Open 2012 and 2013 I wanted to nominate another artist for 2014 whom I could trust and who's practice I admire and respect. I've known Paul Johnson since art school in the early 1990's. He is an extraordinary artist who continues to develop and push his practice in new territories, is generous, thoughtful and has retained a thoughtful critical eye. Not always an easy combination to negotiate. My thanks extend to him in making this selection process a pleasure and privilege. I want to focus this catalogue essay around our experiences of selecting the final exhibition of artworks to enable a sense of transparency and to somehow de-mystify the judging process in situations like this when artists have paid to have their work scrutinised and ultimately will receive a ‘yes’ or ‘no’ decision. There is a kind of love/hate relationship with this kind of opportunity. In an age when artists are constantly bombarded by opportunities via social media and other sources it is important to have an awareness of context for why you apply for something and what the value of that offer might be, particularly if this involves an application fee. This may simply mean placing your work alongside peers where a natural network can develop, socialising at the private view, or with one eye firmly on the prize. I want to reveal the difficulties we found, the responsibility we felt, the nuances that occurred and the delight we both share in coming up with 30 artworks we hope will amuse, surprise and engage in equal measure and encompass a broad spectrum of artwork being made by artists in the UK today. We sat down in a dark room on a hot sunny day in North London to view over 300 artworks that had been submitted with a sense of anticipation……. The existing selection criteria and format for the Barbican Arts Trust ArtWorks Open meant that we viewed the submitted image on a computer screen without any extra information to influence or hinder. Viewing it ‘blind’ so to speak. Our decisions were based purely on the image in front of us, and some basic statistics about the work. Statements were irrelevant and CV’s left at the door. We viewed image after image at face value. There was no curatorial agenda and no theme or question to centre the selection around. This open-endedness seemed at once liberating and daunting. Our ultimate aim was to draw up a shortlist and whittle this down to our final exhibition of around 30 works and we had three choices to do this. Yes, Possible, No. In the early stages most artworks fell into the possible pile, so a kind of long list started to emerge. Issues around taste, judgement and subjectivity were challenged. And it was certainly the case that some work loitered longer in our consciousness than others and challenged our pre-conceived notions of what it is we like. So, what were we looking for?

ArtWorks Open 2014 If an image captured our imagination, and stopped us clicking the mouse - something that had a little spark, which perhaps could not easily be defined or put into words. An image on the edge of becoming; held in a state of tension or drama – otherworldliness - where an artist was working through an idea, trying to find a voice or language, following their own precarious path, not necessarily trying to follow a trend or fashion. We were drawn to these kinds of images. Of course there are problems in selecting work based purely on a screen image and certain assumptions have to be made. Occasionally this was not made any easier when photographs were slightly blurry, obscure and hard to make out. It was equally frustrating at times when artists had submitted very good work, but had not adhered to the selection requirements, - for example it was either too big or was video. After a lunch break, walk and fresh air, we returned to the darkened room to make our final cut. At this point we needed to argue the case as to why an artwork was still in contention. Despite knowing that we weren’t curating the show it’s fair to say we had already started to imagine how the whole show might hang together and noticed common connections between works. Eventually, after some further intense discussion we settled on a selection of 30 artworks, enough to give a sense of the variety of the submission, but not too many so it became a general showcase rather than a selected exhibition. At the point of writing this we have not actually seen any of the work in the flesh, which will provide another exciting layer to the proceedings when it comes to awarding the prizes on the opening night. In a slight shift to previous years Paul and I have requested that we award three prizes in recognition of an emerging artist who we feel will benefit from the use of a studio space to experiment with new ways of making work within a supportive framework at Barbican Arts Group Trust’s studios. Finally, I would like to thank all the artists who have contributed to the Open and to Mark Wainwright for his dedication to the whole process. I look forward to seeing more Barbican Arts Trust Opens in years to come. David Kefford 2014 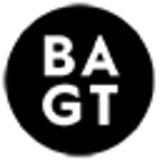