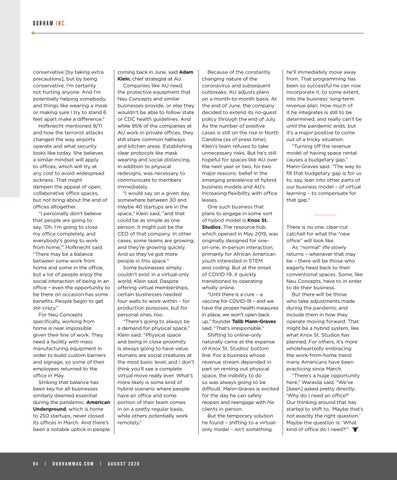 conservative [by taking extra precautions], but by being conservative, I’m certainly not hurting anyone. And I’m potentially helping somebody, and things like wearing a mask or making sure I try to stand 6 feet apart make a difference.” Hofknecht mentioned 9/11 and how the terrorist attacks changed the way airports operate and what security looks like today. She believes a similar mindset will apply to offices, which will try at any cost to avoid widespread sickness. That might dampen the appeal of open, collaborative office spaces, but not bring about the end of offices altogether. “I personally don’t believe that people are going to say, ‘Oh, I’m going to close my office completely, and everybody’s going to work from home,’” Hofknecht said. “There may be a balance between some work from home and some in the office, but a lot of people enjoy the social interaction of being in an office – even the opportunity to be there on occasion has some benefits. People begin to get stir-crazy.” For Neu Concepts specifically, working from home is near impossible given their line of work. They need a facility with mass manufacturing equipment in order to build custom barriers and signage, so some of their employees returned to the office in May. Striking that balance has been key for all businesses similarly deemed essential during the pandemic. American Underground, which is home to 250 startups, never closed its offices in March. And there’s been a notable uptick in people

coming back in June, said Adam Klein, chief strategist at AU. Companies like AU need the protective equipment that Neu Concepts and similar businesses provide, or else they wouldn’t be able to follow state or CDC health guidelines. And while 95% of the companies at AU work in private offices, they still share common hallways and kitchen areas. Establishing clear protocols like mask wearing and social distancing, in addition to physical redesigns, was necessary to communicate to members immediately. “I would say on a given day, somewhere between 30 and maybe 40 startups are in the space,” Klein said, “and that could be as simple as one person. It might just be the CEO of that company. In other cases, some teams are growing, and they’re growing quickly. And so they’ve got more people in this space.” Some businesses simply couldn’t exist in a virtual-only world, Klein said. Despite offering virtual memberships, certain businesses needed four walls to work within – for production purposes, but for personal ones, too. “There’s going to always be a demand for physical space,” Klein said. “Physical space and being in close proximity is always going to have value. Humans are social creatures at the most basic level, and I don’t think you’ll see a complete virtual move really ever. What’s more likely is some kind of hybrid scenario where people have an office and some portion of their team comes in on a pretty regular basis, while others potentially work remotely.”

Because of the constantly changing nature of the coronavirus and subsequent outbreaks, AU adjusts plans on a month-to-month basis. At the end of June, the company decided to extend its no-guest policy through the end of July. As the number of positive cases is still on the rise in North Carolina (as of press time), Klein’s team refuses to take unnecessary risks. But he’s still hopeful for spaces like AU over the next year or two, for two major reasons: belief in the emerging prevalence of hybrid business models and AU’s increasing flexibility with office leases. One such business that plans to engage in some sort of hybrid model is Knox St. Studios. The resource hub, which opened in May 2019, was originally designed for oneon-one, in-person interaction, primarily for African American youth interested in STEM and coding. But at the onset of COVID-19, it quickly transitioned to operating wholly online. “Until there is a cure – a vaccine for COVID-19 – and we have the proper health measures in place, we won’t open back up,” founder Talib Mann-Graves said. “That’s irresponsible.” Shifting to online-only naturally came at the expense of Knox St. Studios’ bottom line. For a business whose revenue stream depended in part on renting out physical space, the inability to do so was always going to be difficult. Mann-Graves is excited for the day he can safely reopen and reengage with his clients in person. But the temporary solution he found – shifting to a virtualonly model – isn’t something

he’ll immediately move away from. That programming has been so successful he can now incorporate it, to some extent, into the business’ long-term revenue plan. How much of it he integrates is still to be determined, and really can’t be until the pandemic ends, but it’s a major positive to come out of a tricky situation. “Turning off the revenue model of having space rental causes a budgetary gap,” Mann-Graves said. “The way to fill that budgetary gap is for us to, say, lean into other parts of our business model – of virtual learning – to compensate for that gap.”

There is no one, clear-cut catchall for what the “new office” will look like. As “normal” life slowly returns – whenever that may be – there will be those who eagerly head back to their conventional spaces. Some, like Neu Concepts, have to in order to do their business. But there will be those who take adjustments made during the pandemic and include them in how they operate moving forward. That might be a hybrid system, like what Knox St. Studios has planned. For others, it’s more wholeheartedly embracing the work-from-home trend many Americans have been practicing since March. “There’s a huge opportunity here,” Warasila said. “We’ve [been] asked pretty directly: ‘Why do I need an office?’ Our thinking around that has started to shift to, ‘Maybe that’s not exactly the right question.’ Maybe the question is: ‘What kind of office do I need?’”