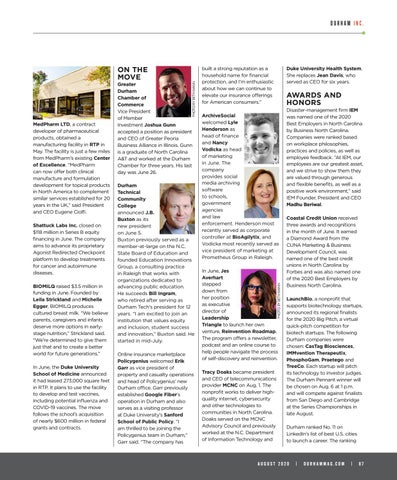 MedPharm LTD, a contract developer of pharmaceutical products, obtained a manufacturing facility in RTP in May. The facility is just a few miles from MedPharm’s existing Center of Excellence. “MedPharm can now offer both clinical manufacture and formulation development for topical products in North America to complement similar services established for 20 years in the UK,” said President and CEO Eugene Ciolfi. Shattuck Labs Inc. closed on $118 million in Series B equity financing in June. The company aims to advance its proprietary Agonist Redirected Checkpoint platform to develop treatments for cancer and autoimmune diseases. BIOMILQ raised $3.5 million in funding in June. Founded by Leila Strickland and Michelle Egger, BIOMILQ produces cultured breast milk. “We believe parents, caregivers and infants deserve more options in earlystage nutrition,” Strickland said. “We’re determined to give them just that and to create a better world for future generations.” In June, the Duke University School of Medicine announced it had leased 273,000 square feet in RTP. It plans to use the facility to develop and test vaccines, including potential influenza and COVID-19 vaccines. The move follows the school’s acquisition of nearly $600 million in federal grants and contracts.

Greater Durham Chamber of Commerce Vice President of Member Investment Joshua Gunn accepted a position as president and CEO of Greater Peoria Business Alliance in Illinois. Gunn is a graduate of North Carolina A&T and worked at the Durham Chamber for three years. His last day was June 26.

Durham Technical Community College announced J.B. Buxton as its new president on June 5. Buxton previously served as a member-at-large on the N.C. State Board of Education and founded Education Innovations Group, a consulting practice in Raleigh that works with organizations dedicated to advancing public education. He succeeds Bill Ingram, who retired after serving as Durham Tech’s president for 12 years. “I am excited to join an institution that values equity and inclusion, student success and innovation,” Buxton said. He started in mid-July. Online insurance marketplace Policygenius welcomed Erik Garr as vice president of property and casualty operations and head of Policygenius’ new Durham office. Garr previously established Google Fiber’s operation in Durham and also serves as a visiting professor at Duke University’s Sanford School of Public Policy. “I am thrilled to be joining the Policygenius team in Durham,” Garr said. “The company has

built a strong reputation as a household name for financial protection, and I’m enthusiastic about how we can continue to elevate our insurance offerings for American consumers.”

ArchiveSocial welcomed Lyle Henderson as head of finance and Nancy Vodicka as head of marketing in June. The company provides social media archiving software to schools, government agencies and law enforcement. Henderson most recently served as corporate controller at BioAgilytix, and Vodicka most recently served as vice president of marketing at Prometheus Group in Raleigh. In June, Jes Averhart stepped down from her position as executive director of Leadership Triangle to launch her own venture, Reinvention Roadmap. The program offers a newsletter, podcast and an online course to help people navigate the process of self-discovery and reinvention.

Tracy Doaks became president and CEO of telecommunications provider MCNC on Aug. 1. The nonprofit works to deliver highquality internet, cybersecurity and other technologies to communities in North Carolina. Doaks served on the MCNC Advisory Council and previously worked at the N.C. Department of Information Technology and

Disaster-management firm IEM was named one of the 2020 Best Employers in North Carolina by Business North Carolina. Companies were ranked based on workplace philosophies, practices and policies, as well as employee feedback. “At IEM, our employees are our greatest asset, and we strive to show them they are valued through generous and flexible benefits, as well as a positive work environment,” said IEM Founder, President and CEO Madhu Beriwal. Coastal Credit Union received three awards and recognitions in the month of June. It earned a Diamond Award from the CUNA Marketing & Business Development Council, was named one of the best credit unions in North Carolina by Forbes and was also named one of the 2020 Best Employers by Business North Carolina. LaunchBio, a nonprofit that supports biotechnology startups, announced its regional finalists for the 2020 Big Pitch, a virtual quick-pitch competition for biotech startups. The following Durham companies were chosen: CasTag Biosciences, IMMvention Therapeutix, PhosphoGam, Praetego and TreeCo. Each startup will pitch its technology to investor judges. The Durham Pennant winner will be chosen on Aug. 6 at 1 p.m. and will compete against finalists from San Diego and Cambridge at the Series Championships in late August. Durham ranked No. 11 on LinkedIn’s list of best U.S. cities to launch a career. The ranking