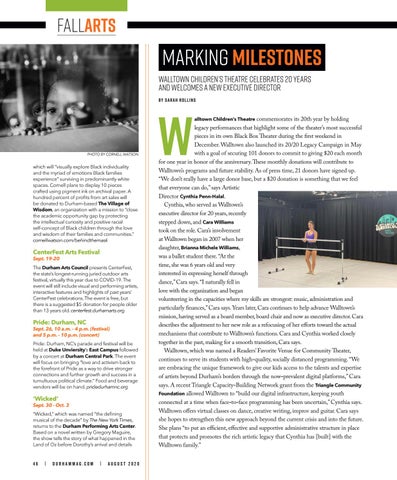 which will “visually explore Black individuality and the myriad of emotions Black families experience” surviving in predominantly white spaces. Cornell plans to display 10 pieces crafted using pigment ink on archival paper. A hundred percent of profits from art sales will be donated to Durham-based The Village of Wisdom, an organization with a mission to “close the academic opportunity gap by protecting the intellectual curiosity and positive racial self-concept of Black children through the love and wisdom of their families and communities.” cornellwatson.com/behindthemask

The Durham Arts Council presents CenterFest, the state’s longest-running juried outdoor arts festival, virtually this year due to COVID-19. The event will still include visual and performing artists, interactive features and highlights of past years’ CenterFest celebrations. The event is free, but there is a suggested $5 donation for people older than 13 years old. centerfest.durhamarts.org

Sept. 26, 10 a.m. - 4 p.m. (festival) and 5 p.m. - 10 p.m. (concert) Pride: Durham, NC’s parade and festival will be held at Duke Unviersity’s East Campus followed by a concert at Durham Central Park. The event will focus on bringing “love and activism back to the forefront of Pride as a way to drive stronger connections and further growth and success in a tumultuous political climate.” Food and beverage vendors will be on hand. pridedurhamnc.org

Sept. 30 - Oct. 3 “Wicked,” which was named “the defining musical of the decade” by The New York Times, returns to the Durham Performing Arts Center. Based on a novel written by Gregory Maguire, the show tells the story of what happened in the Land of Oz before Dorothy’s arrival and details

legacy performances that highlight some of the theater’s most successful pieces in its own Black Box Theater during the first weekend in December. Walltown also launched its 20/20 Legacy Campaign in May with a goal of securing 101 donors to commit to giving $20 each month for one year in honor of the anniversary. These monthly donations will contribute to Walltown’s programs and future stability. As of press time, 21 donors have signed up. “We don’t really have a large donor base, but a $20 donation is something that we feel that everyone can do,” says Artistic Director Cynthia Penn-Halal. Cynthia, who served as Walltown’s executive director for 20 years, recently stepped down, and Cara Williams took on the role. Cara’s involvement at Walltown began in 2007 when her daughter, Brianna Michele Williams, was a ballet student there. “At the time, she was 6 years old and very interested in expressing herself through dance,” Cara says. “I naturally fell in love with the organization and began volunteering in the capacities where my skills are strongest: music, administration and particularly finances,” Cara says. Years later, Cara continues to help advance Walltown’s mission, having served as a board member, board chair and now as executive director. Cara describes the adjustment to her new role as a refocusing of her efforts toward the actual mechanisms that contribute to Walltown’s functions. Cara and Cynthia worked closely together in the past, making for a smooth transition, Cara says. Walltown, which was named a Readers’ Favorite Venue for Community Theater, continues to serve its students with high-quality, socially distanced programming. “We are embracing the unique framework to give our kids access to the talents and expertise of artists beyond Durham’s borders through the now-prevalent digital platforms,” Cara says. A recent Triangle Capacity-Building Network grant from the Triangle Community Foundation allowed Walltown to “build our digital infrastructure, keeping youth connected at a time when face-to-face programming has been uncertain,” Cynthia says. Walltown offers virtual classes on dance, creative writing, improv and guitar. Cara says she hopes to strengthen this new approach beyond the current crisis and into the future. She plans “to put an efficient, effective and supportive administrative structure in place that protects and promotes the rich artistic legacy that Cynthia has [built] with the Walltown family.”