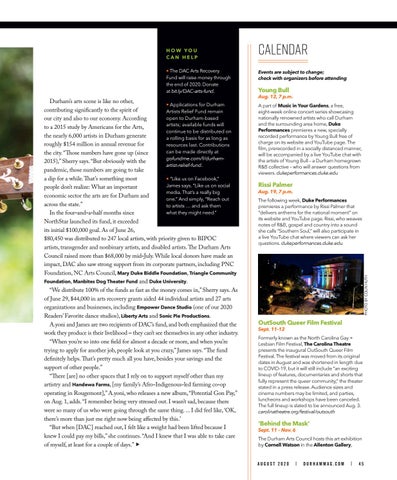 • The DAC Arts Recovery Fund will raise money through the end of 2020. Donate at bit.ly/DAC-arts-fund.

Durham’s arts scene is like no other, • Applications for Durham contributing significantly to the spirit of Artists Relief Fund remain open to Durham-based our city and also to our economy. According artists; available funds will to a 2015 study by Americans for the Arts, continue to be distributed on the nearly 6,000 artists in Durham generate a rolling basis for as long as roughly $154 million in annual revenue for resources last. Contributions can be made directly at the city. “Those numbers have gone up (since gofundme.com/f/durham2015),” Sherry says. “But obviously with the artist-relief-fund. pandemic, those numbers are going to take a dip for a while. That’s something most • “Like us on Facebook,” James says. “Like us on social people don’t realize: What an important media. That’s a really big economic sector the arts are for Durham and one.” And simply, “Reach out across the state.” to artists … and ask them what they might need.” In the four-and-a-half months since NorthStar launched its fund, it exceeded its initial $100,000 goal. As of June 26, $80,450 was distributed to 247 local artists, with priority given to BIPOC artists, transgender and nonbinary artists, and disabled artists. The Durham Arts Council raised more than $68,000 by mid-July. While local donors have made an impact, DAC also saw strong support from its corporate partners, including PNC Foundation, NC Arts Council, Mary Duke Biddle Foundation, Triangle Community Foundation, Manbites Dog Theater Fund and Duke University. “We distribute 100% of the funds as fast as the money comes in,” Sherry says. As of June 29, $44,000 in arts recovery grants aided 44 individual artists and 27 arts organizations and businesses, including Empower Dance Studio (one of our 2020 Readers’ Favorite dance studios), Liberty Arts and Sonic Pie Productions. A.yoni and James are two recipients of DAC’s fund, and both emphasized that the work they produce is their livelihood – they can’t see themselves in any other industry. “When you’re so into one field for almost a decade or more, and when you’re trying to apply for another job, people look at you crazy,” James says. “The fund definitely helps. That’s pretty much all you have, besides your savings and the support of other people.” “There [are] no other spaces that I rely on to support myself other than my artistry and Handewa Farms, [my family’s Afro-Indigenous-led farming co-op operating in Rougemont],” A.yoni, who releases a new album, “Potential Gon Pay,” on Aug. 1, adds. “I remember being very stressed out. I wasn’t sad, because there were so many of us who were going through the same thing. ... I did feel like, ‘OK, there’s more than just me right now being affected by this.’ “But when [DAC] reached out, I felt like a weight had been lifted because I knew I could pay my bills,” she continues. “And I knew that I was able to take care of myself, at least for a couple of days.” 

calendar Events are subject to change; check with organizers before attending

Aug. 12, 7 p.m. A part of Music in Your Gardens, a free, eight-week online concert series showcasing nationally renowned artists who call Durham and the surrounding area home, Duke Performances premieres a new, specially recorded performance by Young Bull free of charge on its website and YouTube page. The film, prerecorded in a socially distanced manner, will be accompanied by a live YouTube chat with the artists of Young Bull – a Durham homegrown R&B collective – who will answer questions from viewers. dukeperformances.duke.edu

Aug. 19, 7 p.m. The following week, Duke Performances premieres a performance by Rissi Palmer that “delivers anthems for the national moment” on its website and YouTube page. Rissi, who weaves notes of R&B, gospel and country into a sound she calls “Southern Soul,” will also participate in a live YouTube chat where viewers can ask her questions. dukeperformances.duke.edu

HOW YOU CAN HELP

Formerly known as the North Carolina Gay + Lesbian Film Festival, The Carolina Theatre presents the inaugural OutSouth Queer Film Festival. The festival was moved from its original dates in August and was shortened in length due to COVID-19, but it will still include “an exciting lineup of features, documentaries and shorts that fully represent the queer community,” the theater stated in a press release. Audience sizes and cinema numbers may be limited, and parties, luncheons and workshops have been canceled. The full lineup is slated to be announced Aug. 3. carolinatheatre.org/festival/outsouth

The Durham Arts Council hosts this art exhibition by Cornell Watson in the Allenton Gallery, august 2020