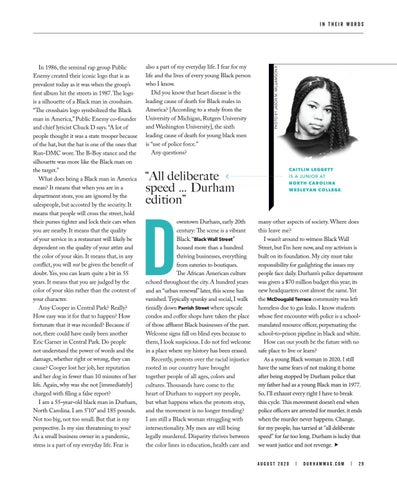 In 1986, the seminal rap group Public Enemy created their iconic logo that is as prevalent today as it was when the group’s first album hit the streets in 1987. The logo is a silhouette of a Black man in crosshairs. “The crosshairs logo symbolized the Black man in America,” Public Enemy co-founder and chief lyricist Chuck D says. “A lot of people thought it was a state trooper because of the hat, but the hat is one of the ones that Run-DMC wore. The B-Boy stance and the silhouette was more like the Black man on the target.” What does being a Black man in America mean? It means that when you are in a department store, you are ignored by the salespeople, but accosted by the security. It means that people will cross the street, hold their purses tighter and lock their cars when you are nearby. It means that the quality of your service in a restaurant will likely be dependent on the quality of your attire and the color of your skin. It means that, in any conflict, you will not be given the benefit of doubt. Yes, you can learn quite a bit in 55 years. It means that you are judged by the color of your skin rather than the content of your character. Amy Cooper in Central Park? Really? How easy was it for that to happen? How fortunate that it was recorded? Because if not, there could have easily been another Eric Garner in Central Park. Do people not understand the power of words and the damage, whether right or wrong, they can cause? Cooper lost her job, her reputation and her dog in fewer than 10 minutes of her life. Again, why was she not [immediately] charged with filing a false report? I am a 55-year-old black man in Durham, North Carolina. I am 5’10” and 185 pounds. Not too big, not too small. But that is my perspective. Is my size threatening to you? As a small business owner in a pandemic, stress is a part of my everyday life. Fear is

also a part of my everyday life. I fear for my life and the lives of every young Black person who I know. Did you know that heart disease is the leading cause of death for Black males in America? [According to a study from the University of Michigan, Rutgers University and Washington University], the sixth leading cause of death for young black men is “use of police force.” Any questions?

owntown Durham, early 20th century: The scene is a vibrant Black. “Black Wall Street” housed more than a hundred thriving businesses, everything from eateries to boutiques. The African American culture echoed throughout the city. A hundred years and an “urban renewal” later, this scene has vanished. Typically spunky and social, I walk timidly down Parrish Street where upscale condos and coffee shops have taken the place of those affluent Black businesses of the past. Welcome signs fall on blind eyes because to them, I look suspicious. I do not feel welcome in a place where my history has been erased. Recently, protests over the racial injustice rooted in our country have brought together people of all ages, colors and cultures. Thousands have come to the heart of Durham to support my people, but what happens when the protests stop, and the movement is no longer trending? I am still a Black woman struggling with intersectionality. My men are still being legally murdered. Disparity thrives between the color lines in education, health care and

many other aspects of society. Where does this leave me? I wasn’t around to witness Black Wall Street, but I’m here now, and my activism is built on its foundation. My city must take responsibility for gaslighting the issues my people face daily. Durham’s police department was given a $70 million budget this year; its new headquarters cost almost the same. Yet the McDougald Terrace community was left homeless due to gas leaks. I know students whose first encounter with police is a schoolmandated resource officer, perpetuating the school-to-prison pipeline in black and white. How can our youth be the future with no safe place to live or learn? As a young Black woman in 2020, I still have the same fears of not making it home after being stopped by Durham police that my father had as a young Black man in 1977. So, I’ll exhaust every right I have to break this cycle. This movement doesn’t end when police officers are arrested for murder, it ends when the murder never happens. Change, for my people, has tarried at “all deliberate speed” for far too long. Durham is lucky that we want justice and not revenge.  august 2020