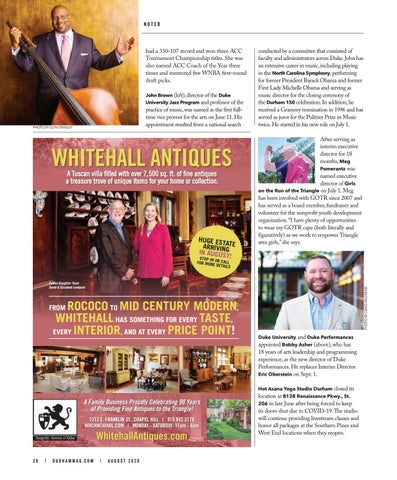 had a 330-107 record and won three ACC Tournament Championship titles. She was also named ACC Coach of the Year three times and mentored five WNBA first-round draft picks. John Brown (left), director of the Duke University Jazz Program and professor of the

practice of music, was named as the first fulltime vice provost for the arts on June 11. His appointment resulted from a national search

WHITEHALL ANTIQUES A Tuscan villa fifillled with over 7, 500 sq. ft. of fifinne antiques a treasure trove of unique items for your home or collection.

conducted by a committee that consisted of faculty and administrators across Duke. John has an extensive career in music, including playing in the North Carolina Symphony, performing for former President Barack Obama and former First Lady Michelle Obama and serving as music director for the closing ceremony of the Durham 150 celebration. In addition, he received a Grammy nomination in 1996 and has served as juror for the Pulitzer Prize in Music twice. He started in his new role on July 1. After serving as interim executive director for 18 months, Meg Pomerantz was named executive director of Girls on the Run of the Triangle on July 1. Meg has been involved with GOTR since 2007 and has served as a board member, fundraiser and volunteer for the nonprofit youth development organization. “I have plenty of opportunities to wear my GOTR cape (both literally and figuratively) as we work to empower Triangle area girls,” she says.

FOR MOR OR CALL E DETAILS

ROCOCO TO MID CENTURY MODERN, WHITEHALL HAS SOMETHING FOR EVERY TASTE, EVERY INTERIOR, AND AT EVERY PRICE POINT!

Duke University and Duke Performances appointed Bobby Asher (above), who has

18 years of arts leadership and programming experience, as the new director of Duke Performances. He replaces Interim Director Eric Oberstein on Sept. 1.

Hot Asana Yoga Studio Durham closed its location at 8128 Renaissance Pkwy., St. 206 in late June after being forced to keep

its doors shut due to COVID-19. The studio will continue providing livestream classes and honor all packages at the Southern Pines and West End locations when they reopen.