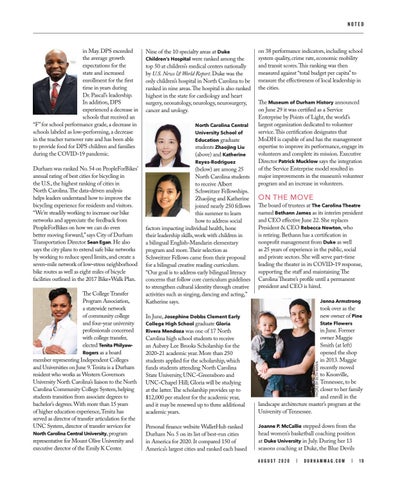 Nine of the 10 specialty areas at Duke Children’s Hospital were ranked among the top 50 at children’s medical centers nationally by U.S. News & World Report. Duke was the only children’s hospital in North Carolina to be ranked in nine areas. The hospital is also ranked highest in the state for cardiology and heart surgery, neonatology, neurology, neurosurgery, cancer and urology.

Durham was ranked No. 54 on PeopleForBikes’ annual rating of best cities for bicycling in the U.S., the highest ranking of cities in North Carolina. The data-driven analysis helps leaders understand how to improve the bicycling experience for residents and visitors. “We’re steadily working to increase our bike networks and appreciate the feedback from PeopleForBikes on how we can do even better moving forward,” says City of Durham Transportation Director Sean Egan. He also says the city plans to extend safe bike networks by working to reduce speed limits, and create a seven-mile network of low-stress neighborhood bike routes as well as eight miles of bicycle facilities outlined in the 2017 Bike+Walk Plan.

(below) are among 25 North Carolina students to receive Albert Schweitzer Fellowships. Zhaojing and Katherine joined nearly 250 fellows this summer to learn how to address social factors impacting individual health, hone their leadership skills, work with children in a bilingual English-Mandarin elementary program and more. Their selection as Schweitzer Fellows came from their proposal for a bilingual creative reading curriculum. “Our goal is to address early bilingual literacy concerns that follow core curriculum guidelines to strengthen cultural identity through creative activities such as singing, dancing and acting,” Katherine says.

The College Transfer Program Association, a statewide network of community college and four-year university professionals concerned with college transfer, elected Tenita PhilyawRogers as a board member representing Independent Colleges and Universities on June 9. Tenita is a Durham resident who works as Western Governors University North Carolina’s liaison to the North Carolina Community College System, helping students transition from associate degrees to bachelor’s degrees. With more than 15 years of higher education experience, Tenita has served as director of transfer articulation for the UNC System, director of transfer services for North Carolina Central University, program representative for Mount Olive University and executive director of the Emily K Center.

In June, Josephine Dobbs Clement Early College High School graduate Gloria Rivera Mendoza was one of 17 North Carolina high school students to receive an Aubrey Lee Brooks Scholarship for the 2020-21 academic year. More than 250 students applied for the scholarship, which funds students attending North Carolina State University, UNC-Greensboro and UNC-Chapel Hill; Gloria will be studying at the latter. The scholarship provides up to $12,000 per student for the academic year, and it may be renewed up to three additional academic years. Personal finance website WalletHub ranked Durham No. 5 on its list of best-run cities in America for 2020. It compared 150 of America’s largest cities and ranked each based

on 38 performance indicators, including school system quality, crime rate, economic mobility and transit scores. This ranking was then measured against “total budget per capita” to measure the effectiveness of local leadership in the cities. The Museum of Durham History announced on June 29 it was certified as a Service Enterprise by Points of Light, the world’s largest organization dedicated to volunteer service. This certification designates that MoDH is capable of and has the management expertise to improve its performance, engage its volunteers and complete its mission. Executive Director Patrick Mucklow says the integration of the Service Enterprise model resulted in major improvements in the museum’s volunteer program and an increase in volunteers.

The board of trustees at The Carolina Theatre named Bethann James as its interim president and CEO effective June 22. She replaces President & CEO Rebecca Newton, who is retiring. Bethann has a certification in nonprofit management from Duke as well as 25 years of experience in the public, social and private sectors. She will serve part-time leading the theater in its COVID-19 response, supporting the staff and maintaining The Carolina Theatre’s profile until a permanent president and CEO is hired. Jenna Armstrong

took over as the new owner of Pine State Flowers

in June. Former owner Maggie Smith (at left) opened the shop in 2013. Maggie recently moved to Knoxville, Tennessee, to be closer to her family and enroll in the landscape architecture master’s program at the University of Tennessee. PHOTO BY BETH MANN

in May. DPS exceeded the average growth expectations for the state and increased enrollment for the first time in years during Dr. Pascal’s leadership. In addition, DPS experienced a decrease in schools that received an “F” for school performance grade, a decrease in schools labeled as low-performing, a decrease in the teacher turnover rate and has been able to provide food for DPS children and families during the COVID-19 pandemic.

Joanne P. McCallie stepped down from the

head women’s basketball coaching position at Duke University in July. During her 13 seasons coaching at Duke, the Blue Devils August 2020