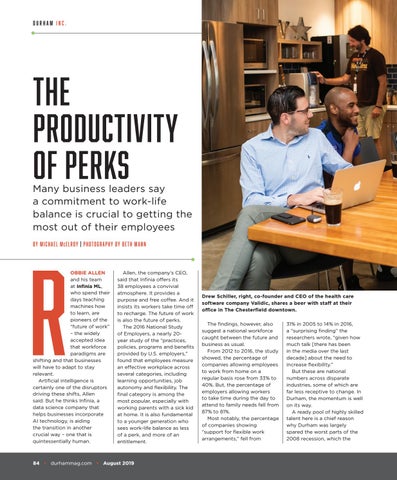 THE PRODUCTIVITY OF PERKS

OBBIE ALLEN and his team at Infinia ML, who spend their days teaching machines how to learn, are pioneers of the “future of work” – the widely accepted idea that workforce paradigms are shifting and that businesses will have to adapt to stay relevant. Artificial intelligence is certainly one of the disruptors driving these shifts, Allen said. But he thinks Infinia, a data science company that helps businesses incorporate AI technology, is aiding the transition in another crucial way – one that is quintessentially human.

Allen, the company’s CEO, said that Infinia offers its 38 employees a convivial atmosphere. It provides a purpose and free coffee. And it insists its workers take time off to recharge. The future of work is also the future of perks. The 2016 National Study of Employers, a nearly 20year study of the “practices, policies, programs and benefits provided by U.S. employers,” found that employees measure an effective workplace across several categories, including learning opportunities, job autonomy and flexibility. The final category is among the most popular, especially with working parents with a sick kid at home. It is also fundamental to a younger generation who sees work-life balance as less of a perk, and more of an entitlement.

Drew Schiller, right, co-founder and CEO of the health care software company Validic, shares a beer with staff at their office in The Chesterfield downtown. The findings, however, also suggest a national workforce caught between the future and business as usual. From 2012 to 2016, the study showed, the percentage of companies allowing employees to work from home on a regular basis rose from 33% to 40%. But, the percentage of employers allowing workers to take time during the day to attend to family needs fell from 87% to 81%. Most notably, the percentage of companies showing “support for flexible work arrangements,” fell from

31% in 2005 to 14% in 2016, a “surprising finding” the researchers wrote, “given how much talk [there has been in the media over the last decade] about the need to increase flexibility.” But these are national numbers across disparate industries, some of which are far less receptive to change. In Durham, the momentum is well on its way. A ready pool of highly skilled talent here is a chief reason why Durham was largely spared the worst parts of the 2008 recession, which the