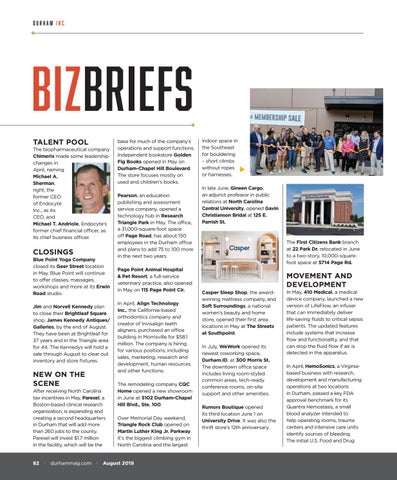 Blue Point Yoga Company closed its Geer Street location in May. Blue Point will continue to offer classes, massages, workshops and more at its Erwin Road studio. Jim and Norvell Kennedy plan to close their Brightleaf Square shop, James Kennedy Antiques/ Galleries, by the end of August. They have been at Brightleaf for 37 years and in the Triangle area for 44. The Kennedys will hold a sale through August to clear out inventory and store fixtures.

NEW ON THE SCENE After receiving North Carolina tax incentives in May, Parexel, a Boston-based clinical research organization, is expanding and creating a second headquarters in Durham that will add more than 260 jobs to the county. Parexel will invest $1.7 million in the facility, which will be the

base for much of the company’s operations and support functions. Independent bookstore Golden Fig Books opened in May on Durham-Chapel Hill Boulevard. The store focuses mostly on used and children’s books. Pearson, an education publishing and assessment service company, opened a technology hub in Research Triangle Park in May. The office, a 31,000-square-foot space off Page Road, has about 150 employees in the Durham office and plans to add 75 to 100 more in the next two years. Page Point Animal Hospital & Pet Resort, a full-service veterinary practice, also opened in May on 115 Page Point Cir. In April, Align Technology Inc., the California-based orthodontics company and creator of Invisalign teeth aligners, purchased an office building in Morrisville for $58.1 million. The company is hiring for various positions, including sales, marketing, research and development, human resources and other functions. The remodeling company CQC Home opened a new showroom in June at 5102 Durham-Chapel Hill Blvd., Ste. 100. Over Memorial Day weekend, Triangle Rock Club opened on Martin Luther King Jr. Parkway. It’s the biggest climbing gym in North Carolina and the largest

indoor space in the Southeast for bouldering – short climbs without ropes or harnesses.

In May, 410 Medical, a medical device company, launched a new version of LifeFlow, an infuser that can immediately deliver life-saving fluids to critical sepsis patients. The updated features include systems that increase flow and functionality, and that can stop the fluid flow if air is detected in the apparatus. In April, HemoSonics, a Virginiabased business with research, development and manufacturing operations at two locations in Durham, passed a key FDA approval benchmark for its Quantra Hemostasis, a small blood analyzer intended to help operating rooms, trauma centers and intensive care units identify sources of bleeding. The initial U.S. Food and Drug