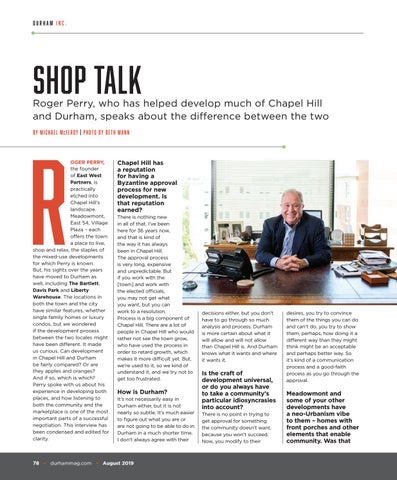 Roger Perry, who has helped develop much of Chapel Hill and Durham, speaks about the difference between the two BY M I C H A E L M C E L R OY | P H O T O BY B E T H M A N N

OGER PERRY, the founder of East West Partners, is practically etched into Chapel Hill’s landscape. Meadowmont, East 54, Village Plaza – each offers the town a place to live, shop and relax, the staples of the mixed-use developments for which Perry is known. But, his sights over the years have moved to Durham as well, including The Bartlett, Davis Park and Liberty Warehouse. The locations in both the town and the city have similar features, whether single family homes or luxury condos, but we wondered if the development process between the two locales might have been different. It made us curious. Can development in Chapel Hill and Durham be fairly compared? Or are they apples and oranges? And if so, which is which? Perry spoke with us about his experience in developing both places, and how listening to both the community and the marketplace is one of the most important parts of a successful negotiation. This interview has been condensed and edited for clarity.

Chapel Hill has a reputation for having a Byzantine approval process for new development. Is that reputation earned? There is nothing new in all of that. I’ve been here for 36 years now, and that is kind of the way it has always been in Chapel Hill. The approval process is very long, expensive and unpredictable. But if you work with the [town] and work with the elected officials, you may not get what you want, but you can work to a resolution. Process is a big component of Chapel Hill. There are a lot of people in Chapel Hill who would rather not see the town grow, who have used the process in order to retard growth, which makes it more difficult yet. But, we’re used to it, so we kind of understand it, and we try not to get too frustrated.

How is Durham? It’s not necessarily easy in Durham either, but it is not nearly so subtle. It’s much easier to figure out what you are or are not going to be able to do in Durham in a much shorter time. I don’t always agree with their

decisions either, but you don’t have to go through so much analysis and process. Durham is more certain about what it will allow and will not allow than Chapel Hill is. And Durham knows what it wants and where it wants it.

Is the craft of development universal, or do you always have to take a community’s particular idiosyncrasies into account? There is no point in trying to get approval for something the community doesn’t want, because you won’t succeed. Now, you modify to their

desires, you try to convince them of the things you can do and can’t do, you try to show them, perhaps, how doing it a different way than they might think might be an acceptable and perhaps better way. So it’s kind of a communication process and a good-faith process as you go through the approval.

Meadowmont and some of your other developments have a neo-Urbanism vibe to them – homes with front porches and other elements that enable community. Was that