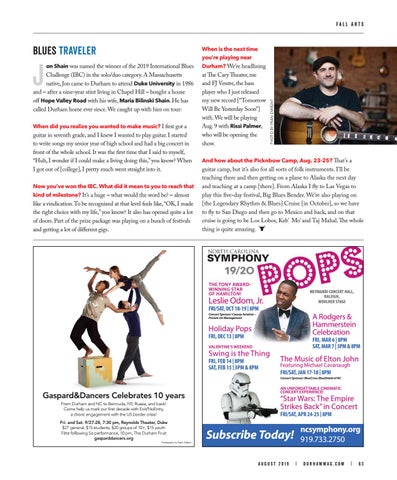 Challenge (IBC) in the solo/duo category. A Massachusetts native, Jon came to Durham to attend Duke University in 1986 and – after a nine-year stint living in Chapel Hill – bought a house off Hope Valley Road with his wife, Maria Bilinski Shain. He has called Durham home ever since. We caught up with him on tour: When did you realize you wanted to make music? I first got a

guitar in seventh grade, and I knew I wanted to play guitar. I started to write songs my senior year of high school and had a big concert in front of the whole school. It was the first time that I said to myself, “Huh, I wonder if I could make a living doing this,” you know? When I got out of [college], I pretty much went straight into it. Now you’ve won the IBC. What did it mean to you to reach that kind of milestone? It’s a huge – what would the word be? – almost

like a vindication. To be recognized at that level feels like, “OK, I made the right choice with my life,” you know? It also has opened quite a lot of doors. Part of the prize package was playing on a bunch of festivals and getting a lot of different gigs.

at The Cary Theater, me and FJ Ventre, the bass player who I just released my new record [“Tomorrow Will Be Yesterday Soon”] with. We will be playing Aug. 9 with Rissi Palmer, who will be opening the show.

When is the next time

guitar camp, but it’s also for all sorts of folk instruments. I’ll be teaching there and then getting on a plane to Alaska the next day and teaching at a camp [there]. From Alaska I fly to Las Vegas to play this five-day festival, Big Blues Bender. We’re also playing on [the Legendary Rhythm & Blues] Cruise [in October], so we have to fly to San Diego and then go to Mexico and back, and on that cruise is going to be Los Lobos, Keb’ Mo’ and Taj Mahal. The whole thing is quite amazing.

Swing is the Thing