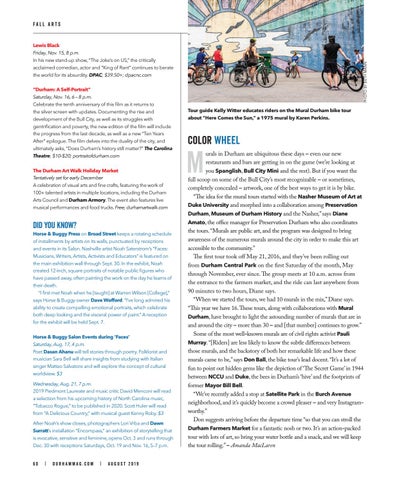 “Durham: A Self-Portrait” Saturday, Nov. 16, 6 – 8 p.m. Celebrate the tenth anniversary of this film as it returns to the silver screen with updates. Documenting the rise and development of the Bull City, as well as its struggles with gentrification and poverty, the new edition of the film will include the progress from the last decade, as well as a new “Ten Years After” epilogue. The film delves into the duality of the city, and ultimately asks, “Does Durham’s history still matter?” The Carolina Theatre; $10-$20; portraitofdurham.com The Durham Art Walk Holiday Market Tentatively set for early December A celebration of visual arts and fine crafts, featuring the work of 100+ talented artists in multiple locations, including the Durham Arts Council and Durham Armory. The event also features live musical performances and food trucks. Free; durhamartwalk.com

Horse & Buggy Press on Broad Street keeps a rotating schedule of installments by artists on its walls, punctuated by receptions and events in its Salon. Nashville artist Noah Saterstrom’s “Faces: Musicians, Writers, Artists, Activists and Educators” is featured on the main exhibition wall through Sept. 30. In the exhibit, Noah created 12-inch, square portraits of notable public figures who have passed away, often painting the work on the day he learns of their death. “I first met Noah when he [taught] at Warren Wilson [College],” says Horse & Buggy owner Dave Wofford. “I’ve long admired his ability to create compelling emotional portraits, which celebrate both deep looking and the visceral power of paint.” A reception for the exhibit will be held Sept. 7. Horse & Buggy Salon Events during ‘Faces’ Saturday, Aug. 17, 4 p.m. Poet Dasan Ahanu will tell stories through poetry. Folklorist and musician Sara Bell will share insights from studying with Italian singer Matteo Salvatore and will explore the concept of cultural worldview. $3 Wednesday, Aug. 21, 7 p.m. 2019 Piedmont Laureate and music critic David Menconi will read a selection from his upcoming history of North Carolina music, “Tobacco Rogue,” to be published in 2020. Scott Huler will read from “A Delicious Country,” with musical guest Kenny Roby. $3 After Noah’s show closes, photographers Lori Vrba and Dawn Surratt’s installation “Encompass,” an exhibition of storytelling that is evocative, sensitive and feminine, opens Oct. 3 and runs through Dec. 30 with receptions Saturdays, Oct. 19 and Nov. 16, 5–7 p.m. 60

Lewis Black Friday, Nov. 15, 8 p.m. In his new stand-up show, “The Joke’s on US,” the critically acclaimed comedian, actor and “King of Rant” continues to berate the world for its absurdity. DPAC; $39.50+; dpacnc.com

urals in Durham are ubiquitous these days – even our new restaurants and bars are getting in on the game (we’re looking at you Spanglish, Bull City Mini and the rest). But if you want the full scoop on some of the Bull City’s most recognizable – or sometimes, completely concealed – artwork, one of the best ways to get it is by bike. “The idea for the mural tours started with the Nasher Museum of Art at Duke University and morphed into a collaboration among Preservation Durham, Museum of Durham History and the Nasher,” says Diane Amato, the office manager for Preservation Durham who also coordinates the tours. “Murals are public art, and the program was designed to bring awareness of the numerous murals around the city in order to make this art accessible to the community.” The first tour took off May 21, 2016, and they’ve been rolling out from Durham Central Park on the first Saturday of the month, May through November, ever since. The group meets at 10 a.m. across from the entrance to the farmers market, and the ride can last anywhere from 90 minutes to two hours, Diane says. “When we started the tours, we had 10 murals in the mix,” Diane says. “This year we have 16. These tours, along with collaborations with Mural Durham, have brought to light the astounding number of murals that are in and around the city – more than 30 – and [that number] continues to grow.” Some of the most well-known murals are of civil rights activist Pauli Murray. “[Riders] are less likely to know the subtle differences between those murals, and the backstory of both her remarkable life and how these murals came to be,” says Don Ball, the bike tour’s lead docent. “It’s a lot of fun to point out hidden gems like the depiction of ‘The Secret Game’ in 1944 between NCCU and Duke, the bees in Durham’s ‘hive’ and the footprints of former Mayor Bill Bell. “We’ve recently added a stop at Satellite Park in the Burch Avenue neighborhood, and it’s quickly become a crowd pleaser – and very Instagramworthy.” Don suggests arriving before the departure time “so that you can stroll the Durham Farmers Market for a fantastic nosh or two. It’s an action-packed tour with lots of art, so bring your water bottle and a snack, and we will keep the tour rolling.” – Amanda MacLaren