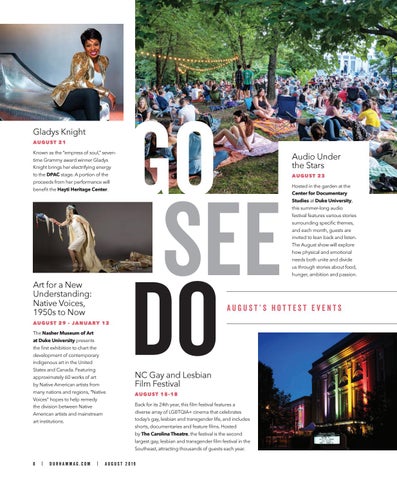 Gladys Knight AUGUST 2 1 Known as the “empress of soul,” seventime Grammy award winner Gladys Knight brings her electrifying energy to the DPAC stage. A portion of the proceeds from her performance will benefit the Hayti Heritage Center.

Art for a New Understanding: Native Voices, 1950s to Now The Nasher Museum of Art at Duke University presents the first exhibition to chart the development of contemporary indigenous art in the United States and Canada. Featuring approximately 60 works of art by Native American artists from many nations and regions, “Native Voices” hopes to help remedy the division between Native American artists and mainstream art institutions.

AU G U ST 23 Hosted in the garden at the Center for Documentary Studies at Duke University, this summer-long audio festival features various stories surrounding specific themes, and each month, guests are invited to lean back and listen. The August show will explore how physical and emotional needs both unite and divide us through stories about food, hunger, ambition and passion.

Audio Under the Stars